Last week there was an online leak coming from Best Buy supposedly, showing that Android 4.0 ICS would be ready for release on 3 very hot phones from Verizon: Droid RAZR, RAZR MAXX and HTC Rezound. The updates were supposed to come this week, with the RAZR and RAZR MAXX scheduled for April 4th, while the HTC Rezound was estimated for around April 6th. We’ve passed the 4th and now we get ready for the Rezound update. Did you get it? 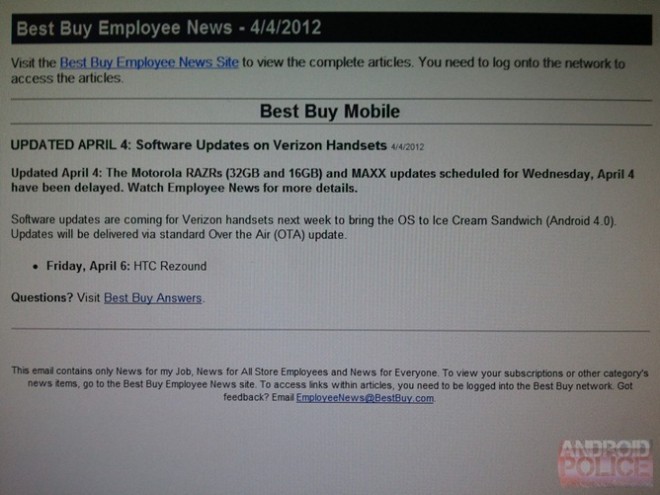 Meanwhile, Android Police scored a new leak from a retailer, indicating that the update has been delayed. April 6th is still on the list for the OTA software update of the Rezound and I guess we’ll find out in the following hours how real was that. Sadly, for people who own RAZR devices no new date was provided… Soak tests already surfaced this week, but not the final ICS update. I have to mention one thing that’s been bothering me: I don’t care what Google and Motorola are doing in the background while they’re merging into one, but since Moto Mobility has been part of Google, Motorola hasn’t been performing well.

I mean, no new phones, no updates in the promised time frame, no more press conferences, no launches, no accessories… what’s wrong with them?! Will they become a silent partner for Google?