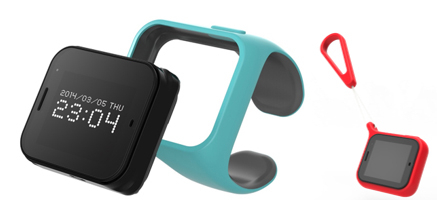 Sunday is the starting day for MWC 2015 and a lot of big brands will be attending the show. There will also be some smaller and less known brands, willing to make a name for themselves. Those include BIGLOBE, that wants to showcase a wearable device, dubbed “Cocolis” and pictured below.

Wearables will once again be a big deal at MWC, with Huawei bringing 3 such devices at the show. Cocolis will be showcased from March 2nd and it features a 1.6 inch screen, with a 220 x 176 pixel resolution and Android 4.2 as the OS. It includes a dual core 1.3 GHz processor, 1 GB of RAM and 4 GB of storage. There’s a nano SIM card slot on board and this model supports 3G connectivity, as well as WiFi, Bluetooth 4.0 and GPS.

BIGBLOBE’s product has a battery capacity of 620 mAh and it’s both dust and waterproof. Its battery offers about 3 days of usage and the Cocolis measures 15.6 mm in thickness and weighs 37 grams. The target audience here are children, apparently.