BlackBerry 10 OS has received its share of demos over the past months and now it also gets a pretty big leak, shown below. I’m talking about the specs of the BlackBerry 10 L Series, an all touch range of devices and N Series, that involves a QWERTY keyboard. People in the know say that RIM will make a formal announcement of the first device with this OS in August. 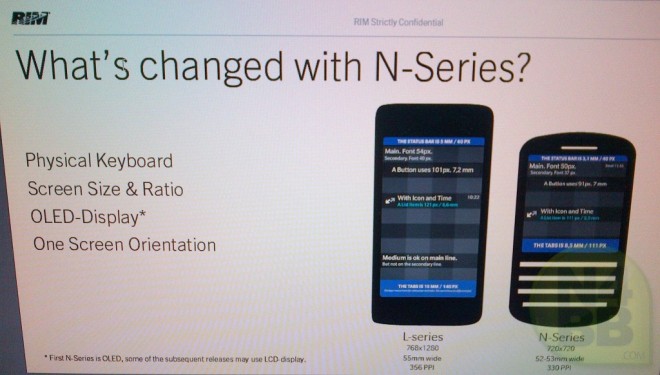 Although details about the platform have been floating out there for a while, the handsets it will run on initially remain a mystery. BlackBerry London and Nevada, two of the rumored phones are supposed to have hit the final production stage. These devices no longer bear the codenames, as shown in the internal document leaked here. Now we’re dealing with the BlackBerry L Series and the N Series. The former is supposed to offer a 768 x 1280 pixel resolution, a 55 mm width and 356 ppi pixel density.

The L Series will even beat the iPhone 4 and 4S Retina Display, but as usual the average user eyes won’t tell the difference. Back to the leaked document, it also shows the UI structure of the L Series, so you get a mental image of how the icons, buttons and status bar are placed. The N Series features a 720 x 720 screen resolution, width of 52 – 53 mm and 330 PPI. Previously codenamed Nevada, the N Series will be the first BB 10 device with physical QWERTY keyboard. It’s also said to rely on OLED technology.