September is a month full of events, so after beginning the month with IFA 2012, now we find out there’s an Apple event on the 12th, the unveiling of the iPhone 5. Also, today is the big day of the Nokia Lumia Windows Phone 8 model unveiling and Motorola also launches something today. In this wave of launches HTC also announced an event for the 19th of this month. 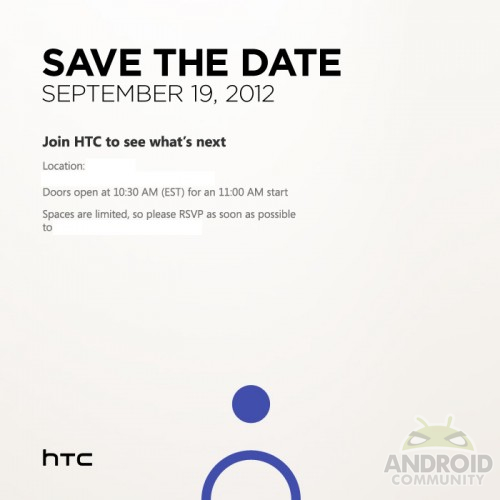 The invitation is pictured above and the event takes place in New York. As shown in this image there’s a blue symbol that reminds me of Google Now somehow, so it makes new think about Jelly Bean updates or phones with Jelly Bean preinstalled. There’s always the option of showcasing Windows 8 smartphones, since HTC didn’t do that at IFA, or maybe unveiling that rumored 5 inch phablet that’s supposed to rival the Galaxy Note II and bring a 1080p display.

Also, there have been a lot of rumors concerning a quad core HTC tablet or maybe the upgraded HTC One X+ handset. There’s a lot to speculate on, but the phablet and WP8 devices are the most likely newcomers. HTC Accord, Rio and Zenith are the models with the rumored Windows Phone HTCs to keep an eye on.