The iPhone 5s was announced on September 10th and it was available in stores on September 20th in SUA and a few other countries. The device is priced at $649 in the 16 GB version off contract and the handset comes in 3 color versions: space grey, champagne gold and white silver. Now let’s find out what we thought about this handset in a detailed review. 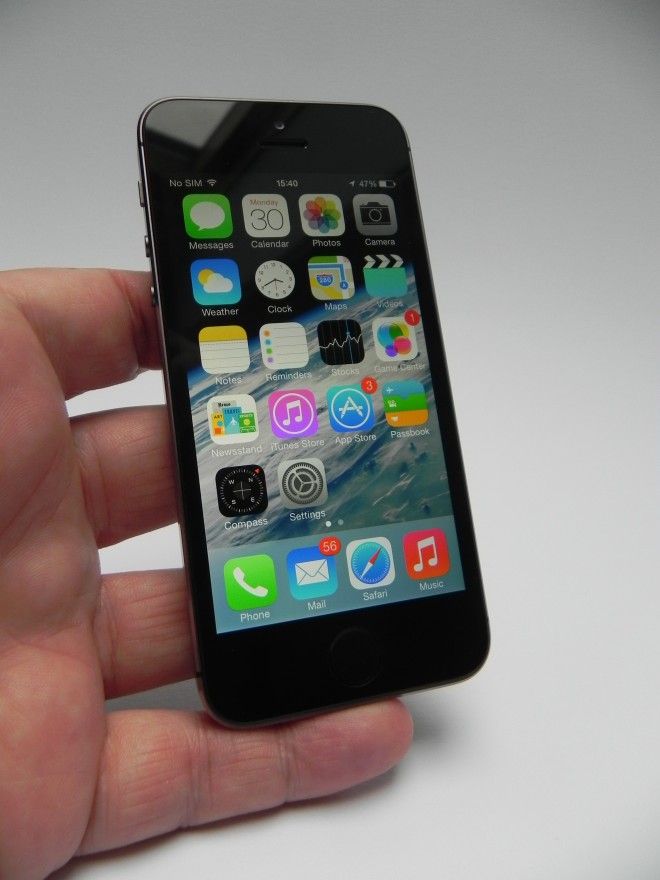 The phone is made of aluminum and glass and it’s 100% the iPhone 5 as far as size and general design goes. The phone measures 7.6 mm in thickness, weighs 112 grams and the only difference between this and the iPhone is the presence of a dual LED flash at the back and the deeper Home button. We’ve got the same 4 inch screen and the nice feeling of cold aluminum in the hand is kept.

This phone is easy to use with a single hand and this time the Home button offers a slight feeling of fragility. The handset is prone to scratches and overall it’s compact and easy to carry around. A conclusion regarding the design is that basically not much has changed compared to the iPhone 5.. On the hardware side, we get an Apple A7 dual core 1.3 GHz processor, a 64 bit chipset with cyclone cores made by Samsung using the 28 nm process. 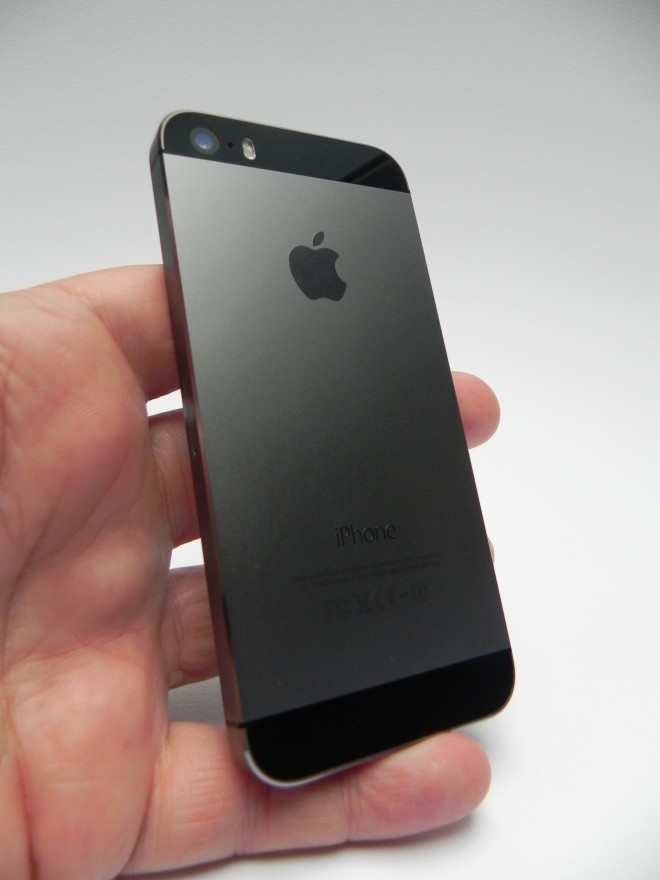 The new model comes with 16, 32 or 64 GB of storage and on the connectivity side, we’ve got the whole package: GPRS, EDGE, HSDPA 42 Mbps, 4G LTE, WiFi dual band and Bluetooth 4.0. There’s an 8 MP dual LED back camera, a front 1.2 MP shooter and the usual accelerometer, gyroscope, proximity sensor, compass, GPS and Glonass among the specs. 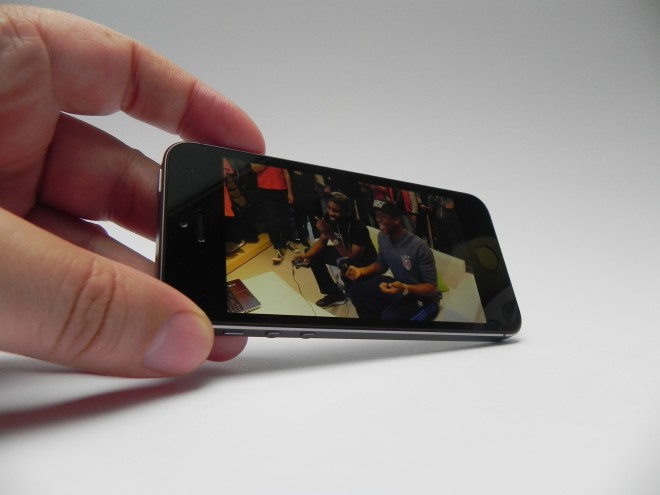 Apple implemented as well a new motion coprocessor, the M7, that receives data from the accelerometer, gyroscope and compass. As far as Touch ID goes, the fingerprint scanner is 170 microns thin and takes print scans with 500 ppi resolution. This is a capacitive fingerprint sensor hidden behind a sapphire crystal cover below the Home button area. The data related to the print is stored on some special memory related to the A7 SoC.

Moving on to the battery, this is a Li Polymer unit with a capacity of 1560 mAh, compared to the iPhone 5 1440 mAh capacity. On paper the new battery brings 250 hours of standby or 10 hours of talk, or maybe 10 hours of 3G browsing. In our tests, the device achieved 11 hours of HD video playback with 50% brightness and WiFi on. 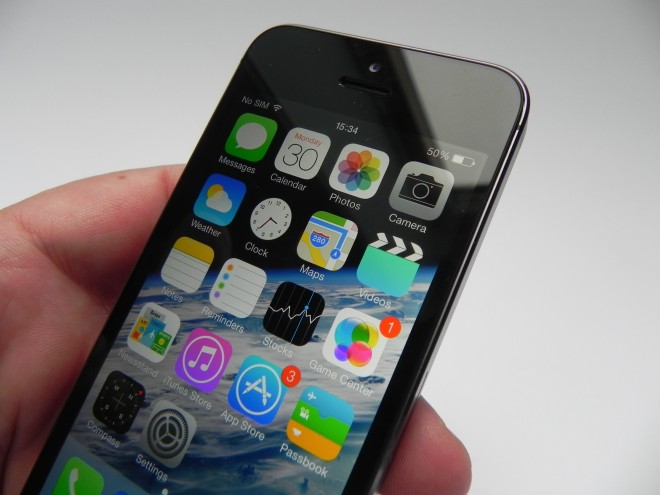 With heavy usage you’ll get 8 hours out of this device and you can also play 4 hours of continous Infinity Blade III with it. The charging from 0 to 100% takes about 2 hours. Overall, you’ll get a day of usage and still have a 10 or 20% left for the next day, which is pretty OK for such a slim phone. On the audio side, there’s a loud speaker integrated into the lower area, although the iPhone 5s is clearly not as loud as the HTC One for example.

The headphones are fantastic, the same Earpods from the iPhone 5, with their excellent anatomical design and superb sound. The speaker offers a clear and warm voice and the audio experience here is fantastic. There’s a new music player UI with a minimalistic feel and overall we found the acoustics to be the same as the iPhone 5’s. 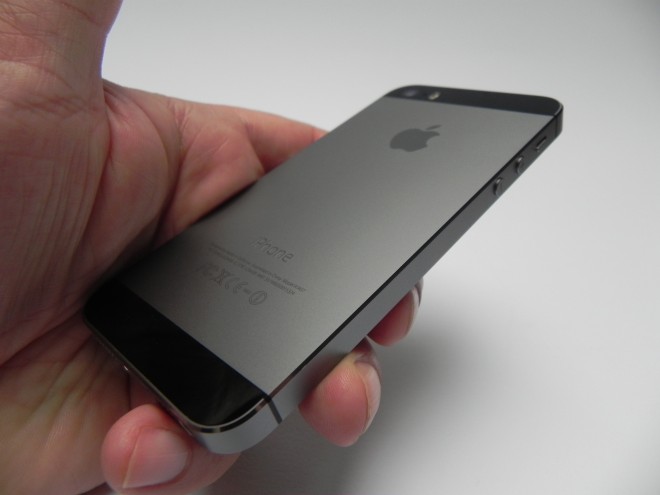 In the screen/video area we found the same 4 inch Retina screen of the predecessor, with 16:9 aspect and IPS LCD panel. The color accuracy is good, view angles are pretty good as well and the screen behaves well in full sunlight. The color really pop out, because of a very slim screen panel. In our microscope and lux meter tests we achieved 420 lux units on white and zero lux units on black, which are very good results, although the maximum brightness is lower than the HTC One’s 500 lux.

The pixels are of the RGB stripe kind and the contrast is very good. Moving to the camera, there’s a lot to talk about here. We’re dealing with an 8 megapixel sensor that measures 1/3 of an inch and offers a pixel size of 1.5 microns, compared to the HTC One’s 2 microns. The iPhone 5s camera offers a focal length of 4.12 mm and an aperture of F/2.2. The picture resolution is 3264 x 2448 and you should know that this camera comes without optical stabilization. 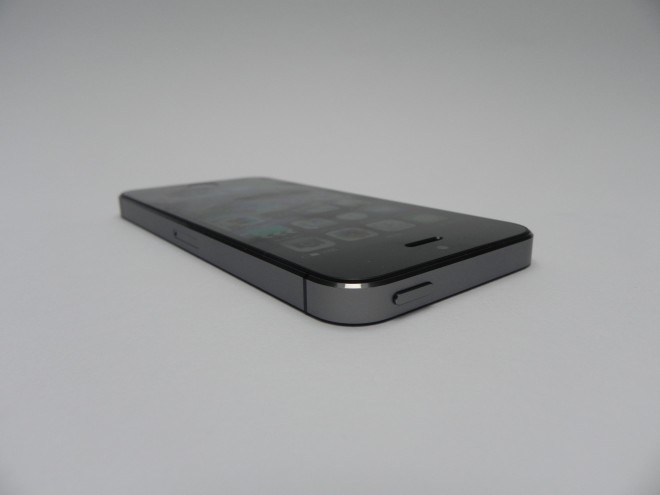 There is however electronic stabilization and we have to praise the very fast capture of the cam. There’s also burst capture with 10 FPS speed, while the dual LED thing involves a setup called True Tone flash. This involves two LEDs with different colors, one cool and one warm. This allows us to take pictures in low light situations with flash that generate realistic colors. The UI is minimalistic in the camera area, offering access to options like HDR, flash, slow mo capture, video, photo, square and panorama. I don’t like the UI, because the main options stick to a portrait orientation even when the handset is turned into landscape.

The effects included here are uninspired and bland, while the HDR is pretty good I have to say. The pictures will tend to be burnt and I mean those that have the subject in full sunlight, as is the case with the roses in the video. The panorama is taken much faster than all rival handsets and the slow mo mode is very, very cool, taking videos in HD at 120 FPS and letting you choose what portion of the clip to slow down.

The normal video is taken in Full HD at 30 FPS and the result is an MP4 file with 16.4 Mbps bitrate. The new camera has a 33% increase in light sensitivity compared to the iPhone 5, but frankly speaking the noise in night pics is still pretty big. Back to the good things, when zooming in during video capture you won’t feel any quality loss, which is good.

Overall, the pictures are underwhelming especially at night, where we expected more and where HTC One still rules. As far as performance is concerned, benchmarks tell the story here. We did a 3DMark test and achieved 9091 points in the Extreme text and 13702 in the Unlimited one. Meanwhile the HTC One scores 10k points and the Galaxy S4 9951 points. 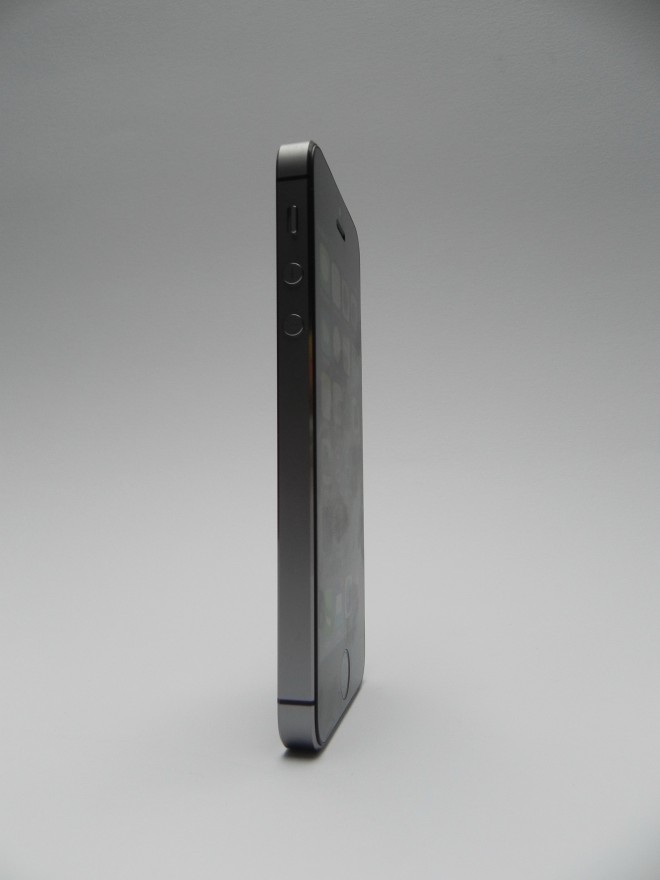 After 15 minutes of HD video playback the temperature was 31 degrees and both are pretty good for an aluminum case phone. It’s important to mention that call quality is very good on this phone, since after all it has 3 microphones integrated into it. Sadly, the dialer offered by iOS looks antiquated and ugly. Speaking of iOS 7, let’s discuss the new platform from Apple. 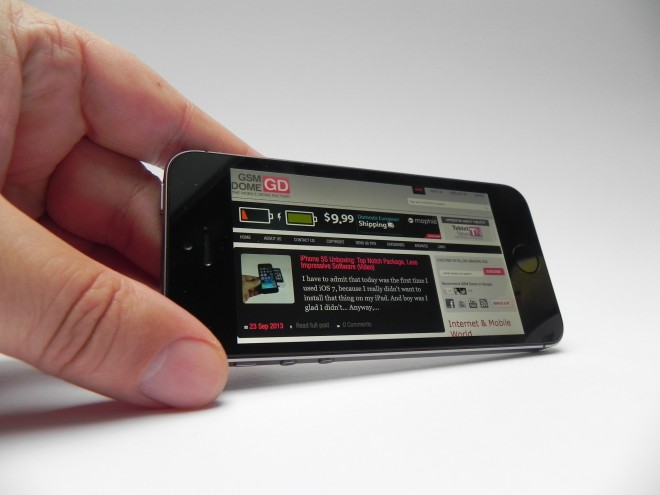 It comes with a new multitasking system, that offers previews of the apps that are open in the background and that can be closed with a swipe up. Multitasking is activated with a double tap of the Home button and iOS 7 stands out through a new series of icons, effects, transitions and looks that involve a ton of gradients and may not be suited for everyone.

There are even new ringtones and transparency effects included. You will access the Control Center with a swipe from the bottom to the top and here you’ll find the connectivity toggles, airplane mode, night mode, volume settings and music player control. Siri gets a new voice and new sources, that include Bing, Wikipedia and Twitter. You can get tweets displayed and you can check your voicemail with a single command. 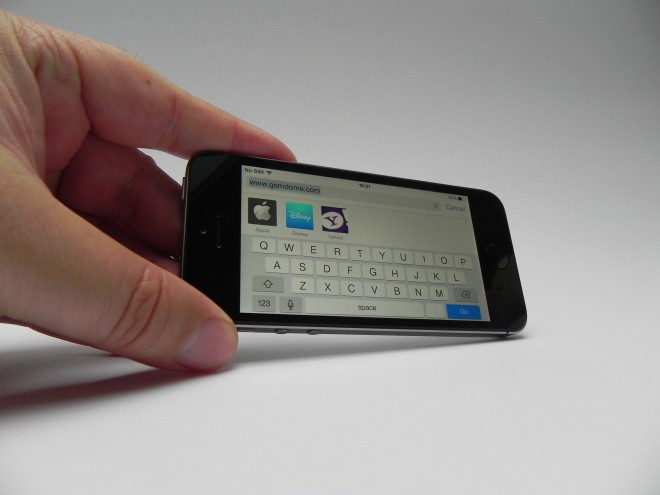 Safari gets a new look and functionality , with the upper and lower part of the browser fading away as you scroll in the lower area of the page. There are 3D tabs to play with and the options available at the bottom feel like 1990s HTML, sadly. The address bar is now also a search bar and there’s a Private mode included and a way to open up Twitter links instantly.

iOS 7 also brings iTunes Radio and a Notification Center, that’s triggered with a swipe from the top to the bottom. We’ve got a today panel with the weather, birthdays, stocks and such info, plus an All panel and Missed panel in the Notification area for the events, calls, texts and tweets you missed. Both the Control Center and Notification Center can be accessed straight from the lockscreen. 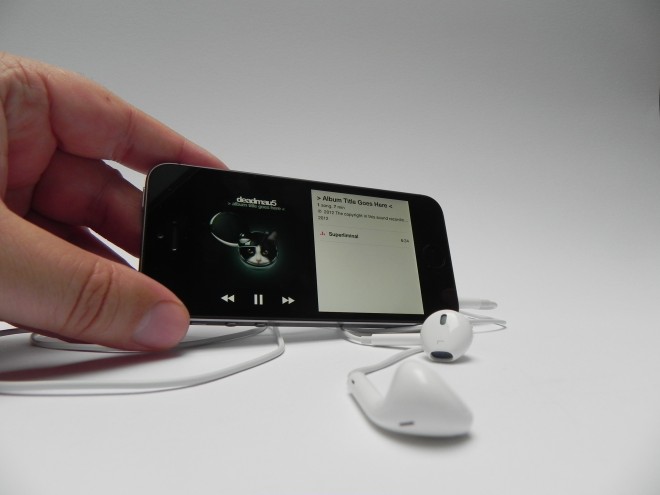 The App Store gets a cleaner look and iOS 7 now has dynamic wallpapers, better organized settings, so the things you need are easier to find. If you swipe from top to bottom while keeping the center area of the screen pressed you’ll trigger the Search area. Finally, there’s iCloud Photo Sharing with the ability to create Streams, that can be shared with other people, allowing them to post comments and new pics in the stream. We’ve got new fonts and icons, plus now the folders can hold more apps.

The app list of the iPhone 5s includes the usual Calendar, Weather, Clock, Notes, Reminders, Stocks and the Game Center, now with a splash of colored bubbles on top. There’s the Newsstand with a new design, iTunes Store, Passbook and extras like Voice Memos. Basically iOS 7 is a faster and flatter iOS 6 with better organized settings and new effects and icons.

Now for the final grades of the handset, let’s see its Pros and Cons.

The iPhone 5s gets from GSMDome.com a 9.7 out of 10 for design, a 9 for hadware and an 8 for OS and UI, for a final grade of 8.9 out of 10. Overall, I am not impressed by this product and only an iPhone 4s owner could fancy this model, if you really want an upgrade. An iPhone 5 may actually be a smart buy now…