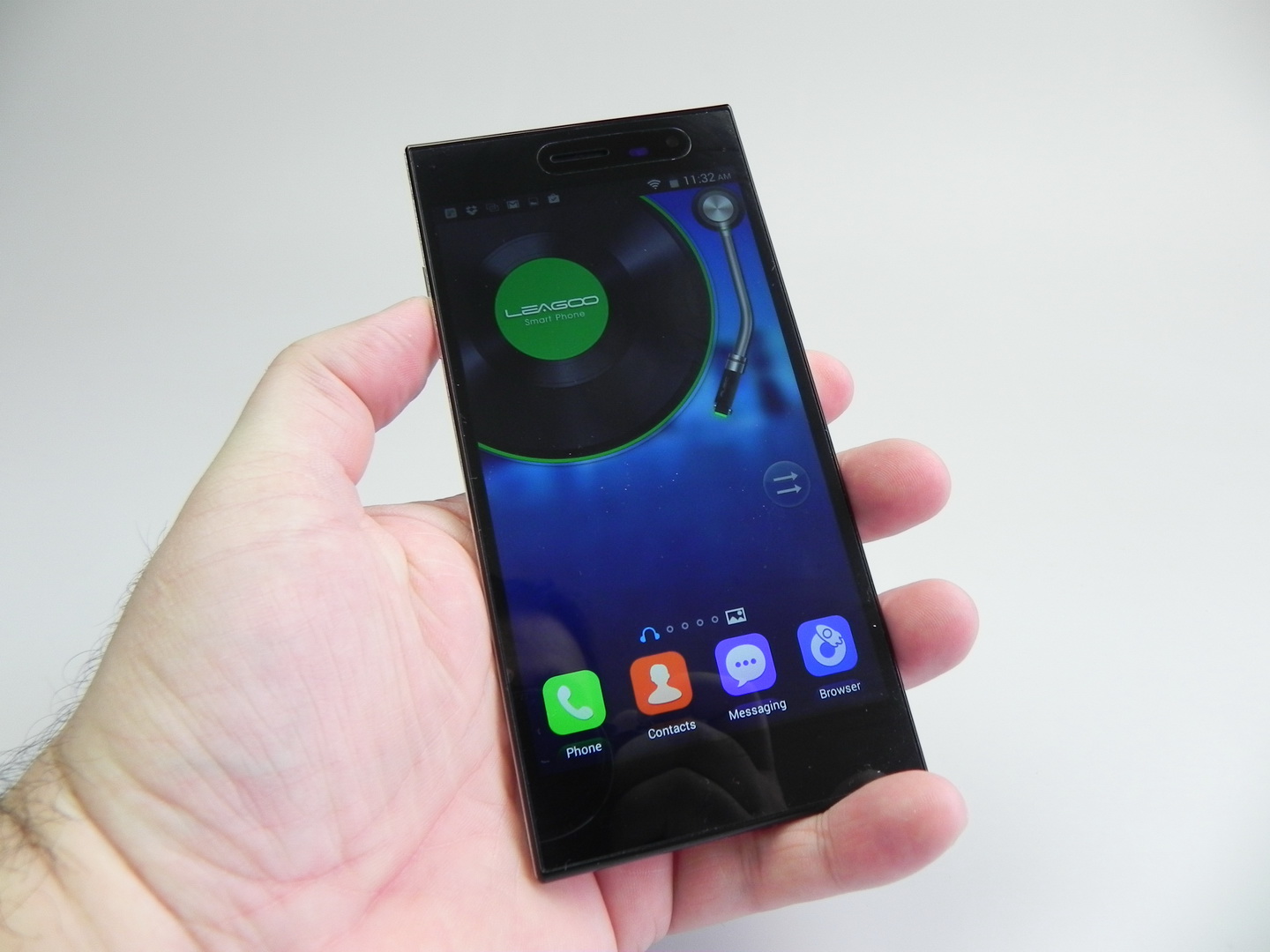 If you’ve been following our website, you probably know we’ve been playing with a phablet called Leagoo Lead 1 for the past days. That model is a 5.5 incher that comes from Hong Kong after all, not Malaysia, like we said in the unboxing. Anyway, this model has an incredibly appealing price tag. It starts at $109 on Geekbuying, goes to $148 on Amazon or $130 on eBay. 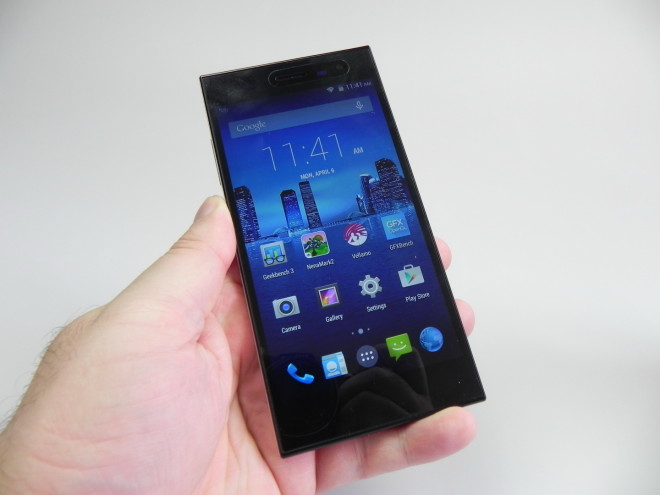 Announced in April 2014, the handset was launched commercially in September 2014. We’re dealing with a phablet that measures just 6.9 mm in thickness and weighs 145 grams. The product comes in black, white, rose red or blue and it has a rectangular and tall/narrow design. Its grip is good and the facade is a bit of a fingerprint magnet.

The body feels solid and it’s made of plastic mostly, but it also includes a metal frame that measures 5 mm in thickness. Upfront we find an earpiece, sensors and front camera, as well as the screen and 3 capacitive buttons. As far as I know, there’s no notification LED here. At the back there’s a main camera, with flash and a metal piece to embed it, plus what seems to be a big speaker. 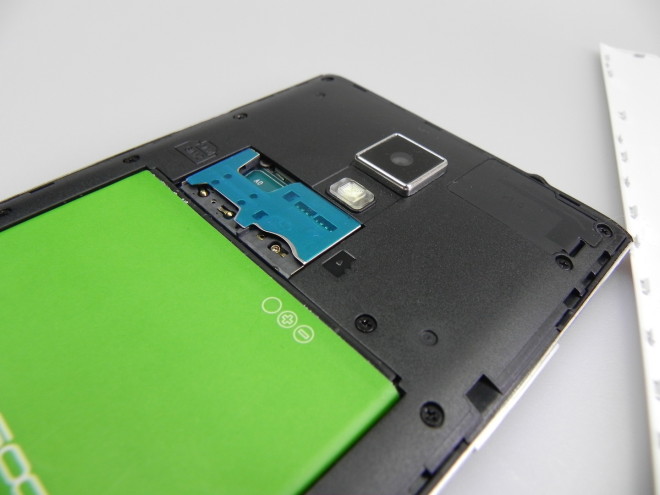 If you remove the back cover, you’ll see the speaker is actually pretty small and below the cover there are dual SIM slots, a microSD card slot and the battery. Leagoo Lead 1 comes with a dotted back texture, that makes it feel a bit like the Galaxy S5. At the top of the phone there’s the audio jack and microUSB port, while at the bottom there’s the mic.

On the left side we find the volume buttons and screens, while on the right there’s the On/Off button. All these buttons offer OK feedback. Overall, I have to say that the design is pretty appealing, slim and solid, reminding me of a quality Oppo phablet. On the hardware side, there’s the 5.5 inch display, with an IPS LCD panel and a 1280 x 720 pixel resolution. 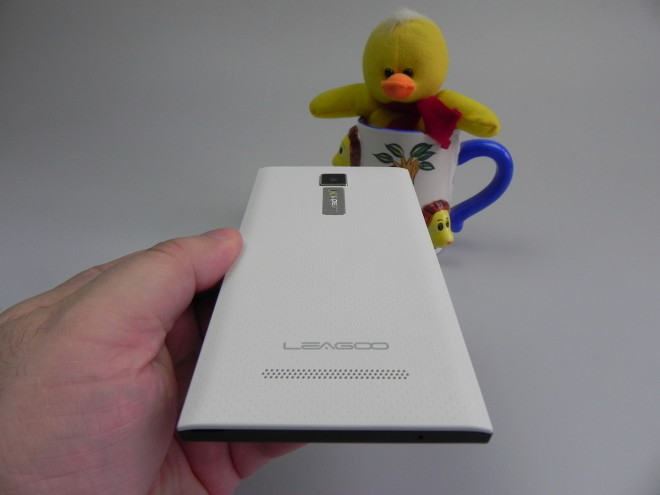 The processor inside the phablet is a quad core Cortex A7, the Mediatek MT6582 clocked at 1.3 GHz and other specs include a Mali 400 MP GPU, 8 GB of storage, a microSD card slot that offers an extra 32 GB of storage. 1 GB of RAM, a 13 MP back camera, front 5 MP shooter and dual SIM dual standby support are also here. GPS, Bluetooth, WiFi, USB OTG and a motion sensor and G Sensor are included on the specs list, too.

The battery inside the Leagoo Lead 1 is a 2200 mAh one, that offered us only 3 hours and 37 minutes of HD video playback in a loop, with WiFi on and brightness at 50%. This means the playback time is lower than the HTC One M7 and Nexus 5, that we usually mention as negative examples  (they achieve around 4 or 5 hours of playback time). 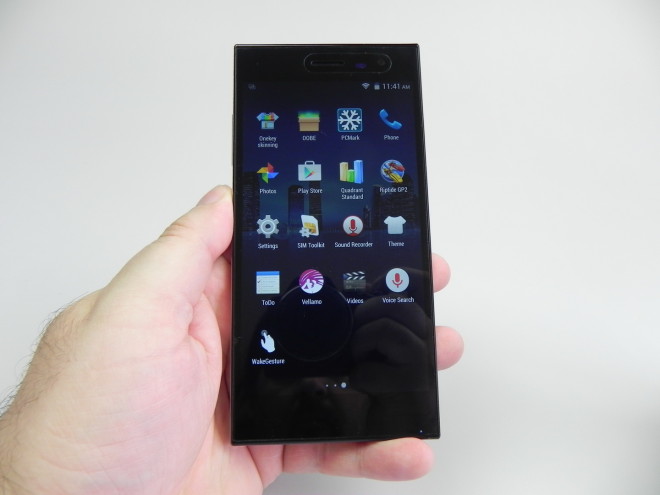 This playback time is made worse by the fact that we’re dealing with a phablet, so expectations were high. The charging also takes 3 hours, which is kind of a lot for a 2200 mAh unit. The PCMark test gave us 3 hours and 38 minutes of continuous usage, so we beat the HTC One M7 and its 3 hours and 13 moinutes. We were also close to the Huawei Honor 6, that achieves 3 hours and 35 minutes, so overall the battery isn’t as bad as it seems.

Obviously, it was sacrificed for the sake of a smaller waistline. The Settings area include a Power Save option, that can only be activated or deactivated. It automatically dims the screen a bit. Moving on to the acoustics, this model comes with a music player with a very simple UI, a stock EQ and options like bass boost, surround sound and other usual feats. 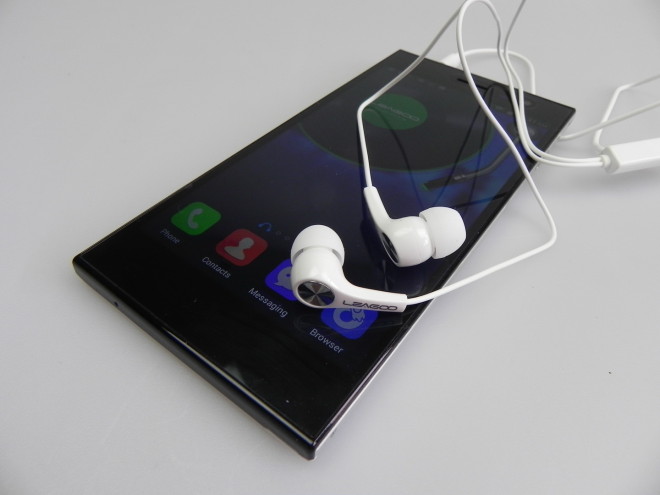 The speaker at the back isn’t very loud, but clarity is OK and we’ve got a medium level bass. Sadly, the device suffers from a bad case of muffling, so once you place it on a flat surface the decibel level goes down about 10 units or so. The speaker doesn’t feel like it has enough strength most of the time. The headphones bundled here have a pretty nice look, they come with a big remote and they’re made of solid plastic.

The headphones are comfy and sadly they offer a muffled sound, no bass at all, but the volume is OK and so is the clarity. If you enter the settings area you’ll see the option BES Audio Enhance in the Audio Profile, that slightly enhances the experience. This model also has FM radio on board, with functions like Search, Speaker or Record FM. 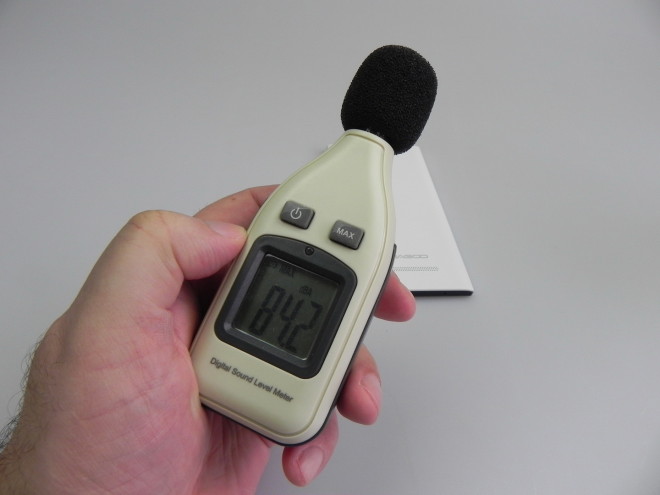 We used a decibelmeter to test this model’s volume and we achieved 84.2 dBA at the back and 68.9 dBA upfront. The latter should be the lowest result we ever measured, but the back value is actually good, past the 82.9 dBA of the LG G Flex 2 or the 82.4 dBA of the Huawei Honor 6. Overall, the acoustics are OK for the price, aside from the muffling.

Leagoo Lead 1 integrates a 5.5 inch IPS LCD screen, with 720p resolution, OGS and full lamination tech. The video player is pretty basic and the actual display experience is bright, crisp and we’ve got vivid colors, without oversaturation luckily. View angles are wide and the sunlight behaviour is bad. Bezels are slim and pixels are of the RGB Stripe kind. Leagoo Lead 1 offers 380 LUX units, which is a good value for the price tag of a bit over 100 bucks. 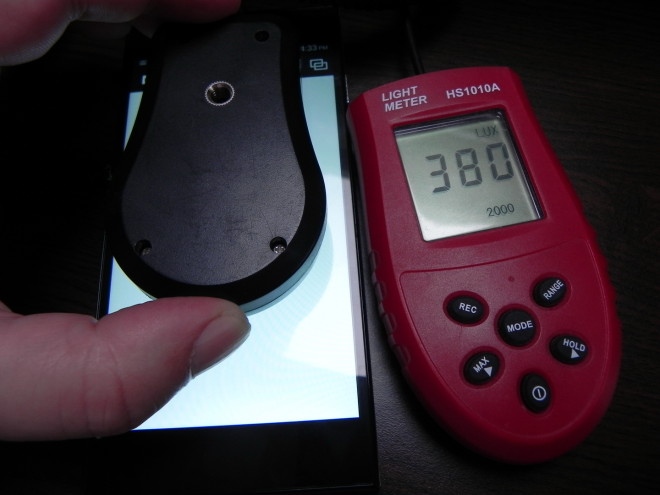 We actually beat the HTC One M9 that generates only 362 LUX or the Oppo Find 7a and its 354 LUX. This is a good screen, especially for the price I mentioned above. The Lead 1 integrates a 13 megapixel main camera, a 5 MP front shooter and from what we gather there may be Sony sensors in the mix here. The camera UI is pretty simple and standard and on the left side of the screen we can find the capture modes: normal, face beauty with a slider for beautification, live photo, face beauty again somehow and panorama. 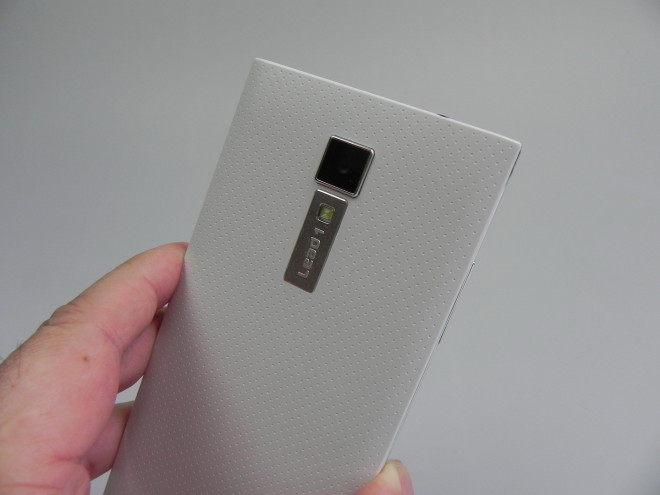 The list of options goes on with Smile Shot, HDR, Self Timer, Continuous Shot, picture size (13 MP, 8 MP and lower), preview size, ISO up to 1600 and moving to the video options, you’ll find EIS, microphone, audio mode, time lapse and quality (720p or 1080p). Leagoo Lead 1 has a slow focus, slow picture capture and offers up to 4X zoom.

The gallery of shots we did, which you can see here, was taken on a sunny day. The colors are oversaturated and luckily the pics are not very sun burnt for such a sunny day. The HDR is quite good and that sign post is highlighted and its brightness is OK. We’ve got clean and clear shots, good details and good texture in the HDR shots. Macros look good, but the color of the water and trees, the blue and the green are totally artificial and unrealistic. 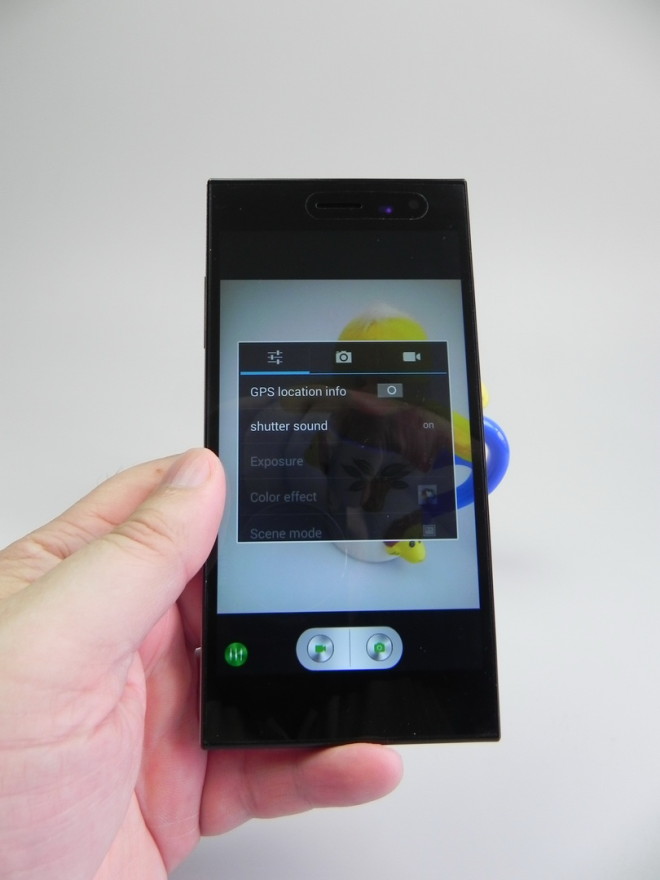 The pictures look like postcards most of the times. In the shadows the colors become more realistic. When taking landscape shots, you will notice that the details are blurry. Panoramas look great and so does the text in those big panel shots. Overall, I’d say these pictures look allright for the price range we’re in. They feel like they were taken by a reasonably good 12 or 8 MP sensor from 2013, so to say.

On the video side, we’re getting MP4 Full HD capture here, at 30 FPS and with a bitrate of 17 Mbps. The first video we caught was rather blurry, stabilization was poor, but the colors were quite OK. Then came a second video, with a surreal blue and wind problems. There was also focus loss. Then came video 3, that was bunt, but had OK details and it wasn’t very crisp when zooming in.

Finally, the last video offers OK colors, some motion blur and sadly the image isn’t crisp. I’d say that this model offers good picture taking in its price range, but pretty mediocre filming, no matter how much you pay for it. The editing is done with the usual filters, frames, crop, rotate options, as well as some special face editing options. 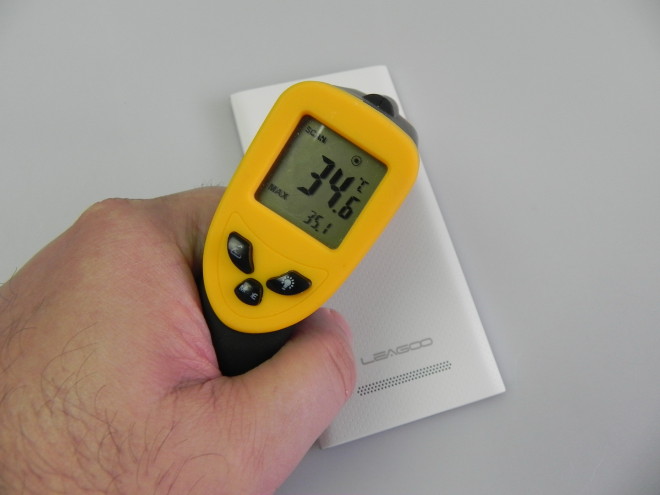 The device reaches a temperature of 35.1 degrees Celsius after playing Riptide GP2 for 15 minutes, making it the coldest phone we’ve ever tested, which is a big deal. The web browser is fast and the keyboard offered here is the stock one and a pretty comfy one, too. On the phone side of things, we’ve got speed dial, a one hand keypad, OK call quality, loud speaker, but no noise canceling.

Now let’s see the benchmarks! We compared this model to the Allview E3 Sign and Wiko Rainbow. All 3 devices have the same quad core MediaTek CPU, pretty much the same resolution and only one of them has 2 GB of RAM. Here are the results: 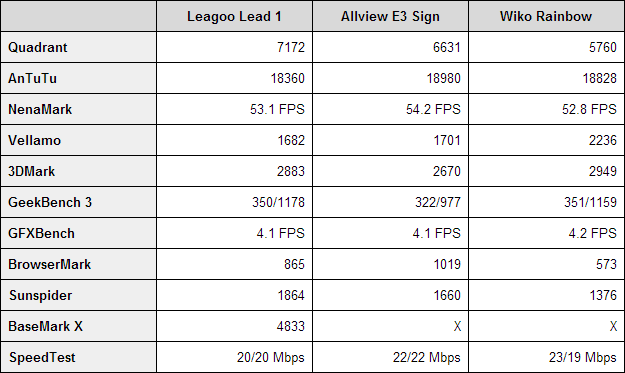 Leagoo Lead 1 wins only 2 out of the 10 tests, but it manages to run the Riptide GP2, a 3D racing game just fine, with pretty good details, lighting and such. As far as the actual use experience goes, this model has that annoying millisecond lag in its homescreens. As far as the software goes, this handset runs Android 4.4.2 with a custom theme and all the apps are placed on the homescreens.

If you keep the screen pressed, you’ll see widgets you can place on the screen, as well as apps. If you press the menu button in the homescreen, you will be able to tweak wallpapers, desktop settings, effects and transitions, themes, create folders and use a screen manager. Just like the Oppo Find 7 and its Color OS, this model has a special homescreen for the music player and a special homescreen with a picture timeline and camera shortcut. 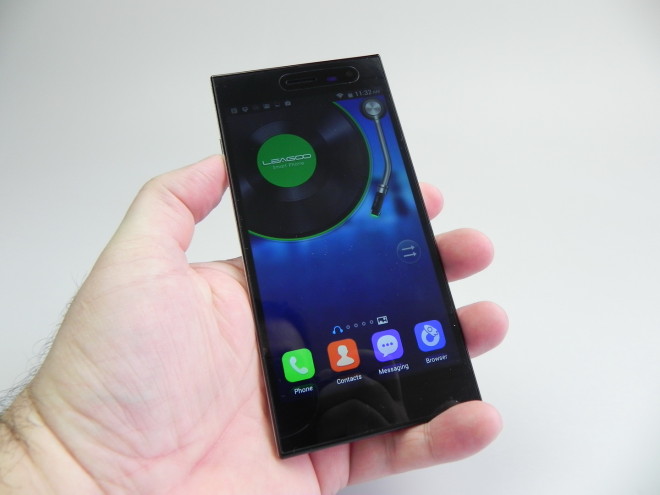 They are both present as big widgets. If you keep the Home button pressed, you will trigger the multitasking area and shut down apps by swiping to the side. The dropdown area includes the usual notifications, Quick Settings and a battery widget offered by a special app. The Settings area offers access to the HotKnot feature, allows you to change launchers and access a series of gestures.

Here’s the verdict and the Pros and Cons!

We give this model a 9.2 out of 10 for design, an 8.7 for hardware and an 8.7 for OS and UI. The final grade is 8.86 out of 10 and also give it a bonus for the incredibly good price tag of a bit over $100. The handset gets a final grade of 9.15 out of 10. Basically, for the price of a low end Lumia you’re getting a phablet with good specs. It’s an excellent media consumption tool, well worth its grade.