The LG Google Nexus 5 was one of the devices that we played with over the past weeks, as December started. This is the second Nexus phone made by LG, after last year’s Nexus 4. Announced in October, the handset was offered in stores in November and it’s priced at $350. This is the very first Android 4.4 KitKat handset, that was already updated to Android 4.4.1 and 4.4.2 in the meantime. 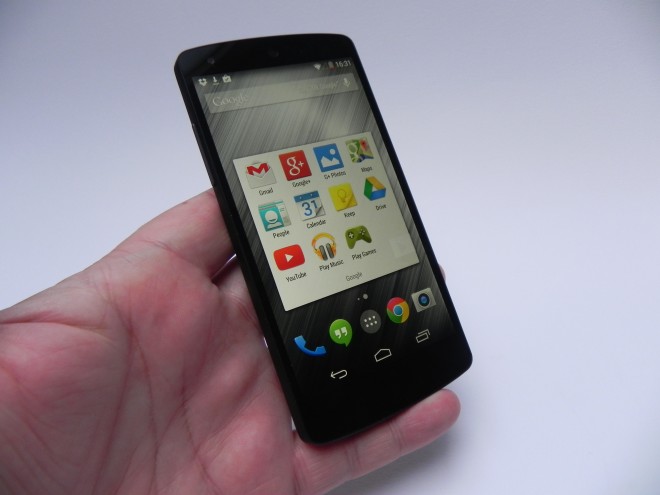 As far as design goes, the smartphone measures 8.6 mm in thickness and weighs 130 grams. In theory this sounds like a bulky phone, but the weight is well distributed and the handsets sits perfectly in the hand. The back offers a soft touch surface and it’s a bit of a grease magnet. Compared to the Nexus 4, the Nexus 5 is 9 grams lighter and 0.5 mm thinner.

The design is simple, we get a matte finish here and the whole soft touch back feels like Nexus 7 2013. Nexus 5 uses a polycarbonate case, with a facade covered in Gorilla Glass 3 and a much more rectangular body than the previous Nexuses. As far as specs go, the Nexus 5 packs a 4.95 inch True HD IPS+ Full HD screen, a quad core Snapdragon 800 2.3 GHz CPU, the Adreno 330 GPU and 16/32 GB of storage. There’s no microSD storage, but we get 2GB of RAM, an 8 megapixel camera with LED flash at the back and a front 1.3 megapixel shooter. 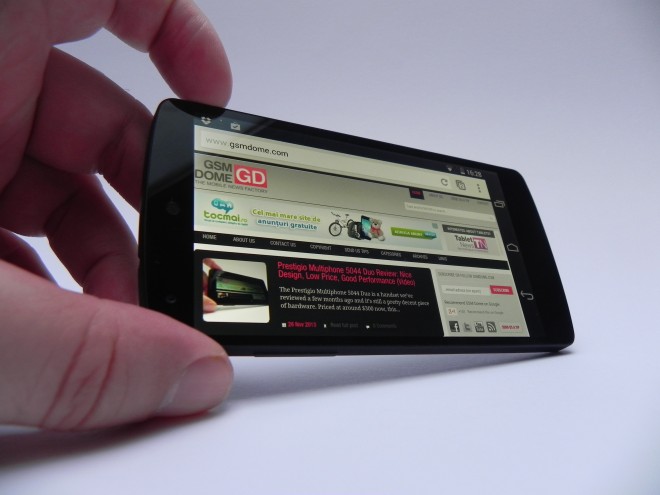 On the connectivity side there’s quad band GSM/GPRs/EDGE, LTE, microUSB with SlimPort TV out, Bluetooth 4.0, NFC, WiFi, DLNA, GPs and Glonass. As far as the batter is concerned, we were totally disappointed by the 2300 mAh unit inside the new Nexus. It only offered us 4 hours of continuous HD video playback with WiFi on and brightness at 50% or 5 hours of gaming. The charging time is 1 hour and 50 minutes.

As far as the multimedia experience is concerned, we get good clarity and a not so loud speaker. The bass is good and you should know that there’s no bundled headphones here. It feels like something is missing when you’re listening to a tune on this handset and overall it’s well below the acoustics of the Galaxy S4 and HTC One for example. 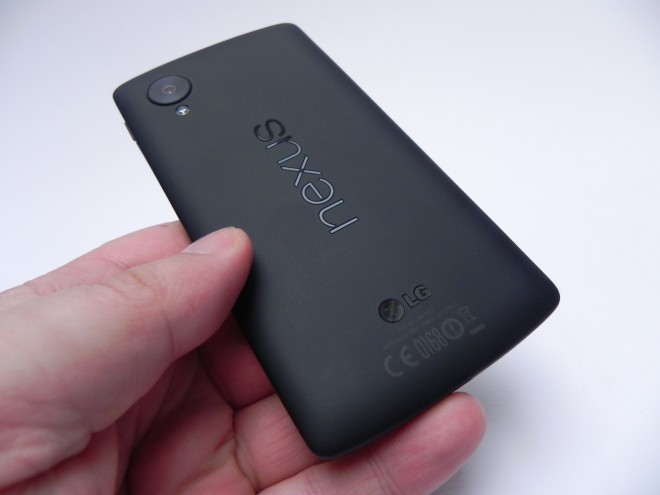 Also, the speaker is easy to muffle when playing games. Taking a look at the video experience, we find here realistic colors, good view angles and a pretty good brightness of 400 lux units on black. Meanwhile on black we achieved 5 lux units, which means that black is not dark at all. The sunlight behaviour is pretty decent and overall the display is quite good, aside from the black level. The brightness is the strong point here…

Moving further to the camera, we get an 8 megapixel shooter with optical image stabilization, 1/3.2 inch sensor and 1.4 micron pixels. The UI hasn’t changed from Android 4.2 and I don’t dig that swiping and tapping interface too much. Settings and options include Exposure, HDR+, white balance, scenes, Photo Sphere and a few more. 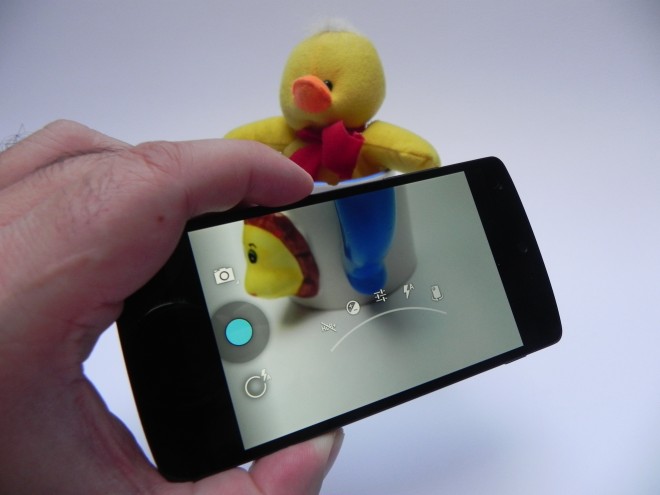 The pictures I’ve taken with this camera come with cold colors, but their quality is clearly above the one of the Nexus 4, but less than the imaging performance of the Galaxy S4 or even the HTC One Mini. There’s a brand new feature here called HDR+, that takes a bunch of pictures and combines them into one with excellent exposure and brightness, everything settled with the aid of a new algorithm. The close ups look very nice and I should mention that the viewfinder shows a 16:9 image, even though your pics are taken in 4:3, so you lose some screen estate.

The camera and focus are not exactly fast, but following the Android 4.4.1 update, you’ll solve these issues. LG and Google promised top notch stabilization here, but they don’t quite deliver if you ask me. You’ll keep an OK video quality even when zooming in and the video filming is done in Full HD at 30 FPS.

Bitrate is 17 Mbps and the camera tends to lose focus quite a bit. The night shots feature a lot of noise, but look better than the ones of the iPhone 5s for example. Panoramas are also pretty good and so are the 3D ones. Android 4.4.1 fixes most of my complaints about the camera, including the speed and it also adds a special pinch to zoom feature for HDR+.

Nexus 5 reaches 42 degrees Celsius after gaming, but that overheating process is not done in any area that you’ll touch with your hand. As far as the benchmarks are concerned, I decided to compare the Nexus 5 to the LG G2, Galaxy S4 and HTC One, the flagships of the year 2013. The benchmark results were not that impressive, with scores like 1384 in Vellamo and 8600 in Quadrant showing us that the test apps are not that optimized for KitKat. We did score a pretty good 16654 points in 3DMark, beating the LG G2, S4 and HTC One by a few thousand points. 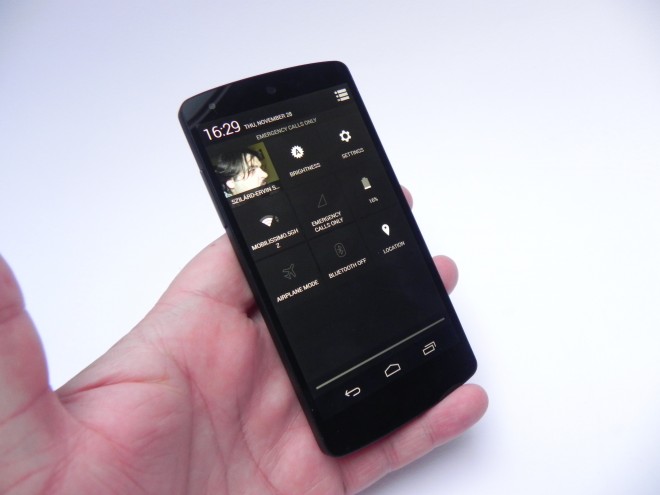 The browser included here is very fast, but the download speed is less than impressive, especially compared to an iPhone 5 for example. The OS available here is the famous KitKat, that was recently updated to version 4.4.2. Android 4.4 brings a new UI, that involves a transparent status and system bar, bigger icons, widgets separated from apps and highlighted with a white background. If you say “OK Google” in the homescreens, you’ll now trigger the famous search from Google Now, as shown in the video below.

There’s also a Google Now homescreen, with your favourite commute routes, favourite sports team scores and restaurants nearby for example, plus the weather. Google included more white in the UI here and a dialer with a more universal search, that also brings nearby results. There’s an Immersive mode available, triggered in reading and video apps and offering you the full screen to enjoy content. 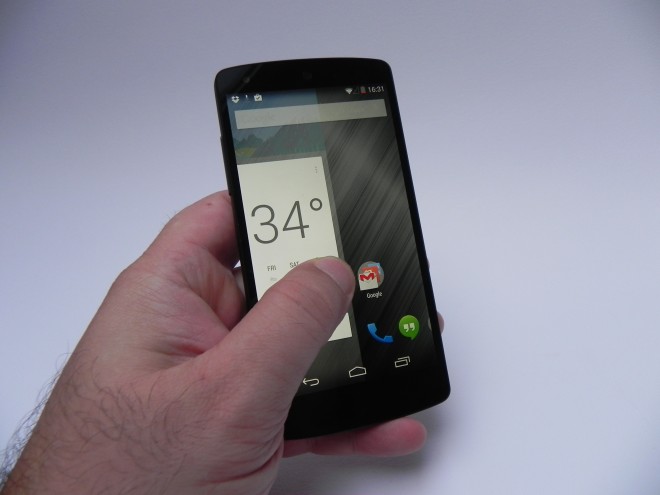 The Hangouts app now includes text messages, MMS, videocalls and GIF sending and also comes with emojis. QuickOffice is preinstalled on the handset and we also get pedometer support, increased speed thanks to the Project Svelte tech and a lockscreen camera shortcut that looks a lot like iOS 7. There’s also improved wireless printing support and improved e wallet features.