Mobile phones have become more than just mere handsets in the past years, specially in poor third world countries, where they’re used as more complex devices. Just look at the Nokia Life Tools service, providing info about the agriculture, weather, crops and prices on the most basic of handsets.

Now, we’ve learned that mobile phones might even work as low cost microscopes. 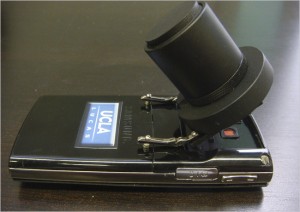 Invented by researcher Aydogan Ozcan, this product is entering mass production thanks to the company Microskia, recently founded. In order to turn a mobile phone into a microscope, Microskia adds an LED, that costs about $10 and interacts with the handset’s camera. All the phone does is emit a beam on the sample of blood provided by the patient, displaying the results afterwards.

This is a great solution for poor countries and a great idea for doctors in such countries. Nokia is also involved in such health-related initiatives, since it has a 60-70% market share in Africa and India, while in Brazil it started the Nokia Data Gathering project, allowing doctors to record on their handsets the number of dengue fever cases, the hygiene standards and more.