Since I’ve had the chance of testing both the Nokia E6 and BlackBerry Bold Touch 9930 at the same time, I’ll use the opportunity and compare them against each other. The result is the versus video you can see at the bottom of the article and the following lines: 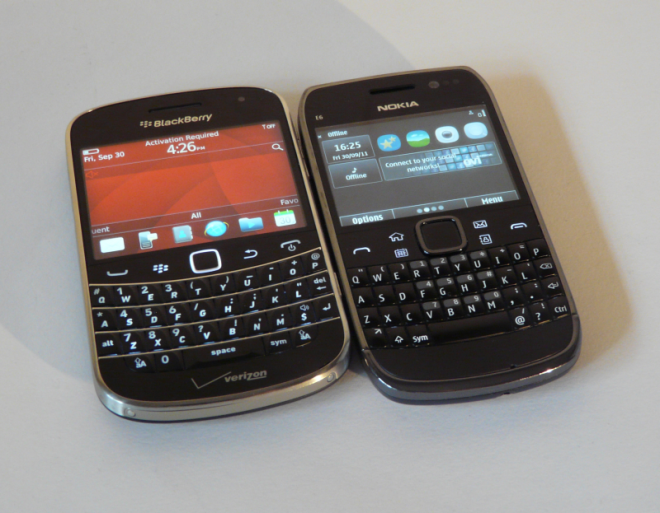 For starters, both devices have the same thickness, 10.5mm and they weigh about the same: 133 grams for the Nokia E6 and 130 grams for the BlackBerry. There’s a clear advantage for the new Bold unit and its 2.8 inch display, versus the 2.46 inch screen on the Nokia E Series model. However, the resolution is the same: 640 x 480, although the screen on the E6 is less comfortable to use.

What’s stunning here is that Nokia handset uses a 680MHz processor, while the BlackBerry Bold Touch 9930 relies on almost double the power, with 1.2GHz available. However, I can’t say I felt this difference while browsing or performing standard tasks. BlackBerry OS 7 and Symbian Anna are faced against each other, the first relying on multiple business features and apps, plus security functions, while Symbian Anna is simple and very familiar for most users, although it looks antique.

In some countries, the BlackBerry Bold Touch 9930 is priced at double the amount of the E6 and that’s not right at all, considering that the keyboard on the Nokia smartphone is actually more comfortable than the BlackBerry’s (at least for me). In the end the wideness of the Canadian handset makes it way too large to be a real keeper, honestly… but you’ll be the one to decide in the end.