Nokia Lumia 820 is a midrange Windows Phone 8 handset that’s available for free on AT&T contrat or for $349 off contract. The device is part of the first wave of WP8 devices that was announced in September and launched in November 2012. We’re here to show you a detailed review of the handset. 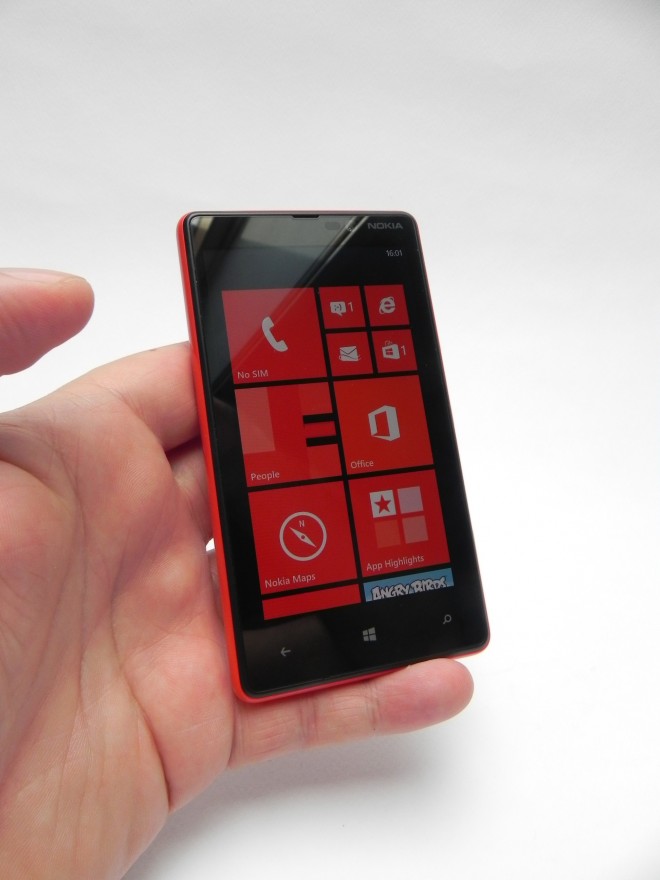 We’ve already reviewed the Lumia 920 and it’s safe to say that this model is a cheaper version of that. The design is less rounded than the one of the Lumia 920 and the Nokia Lumia 820 comes with a 9.9 mm thick case and it weighs 160 grams. This product’s design may resemble the Lumia 710 a bit, for those of you who have seen that model.

It’s got some plastic finish buttons on the side and a singular speaker at the bottom. The back side of the case is removable  and it’s made of polycarbonate. The removal is pretty hard to do, starting with the upper right corner of the case. Under the hood we find the battery and under the battery we find a microSD card slot and microSIM. I have to say that the body that’s covered by the case tends to wiggle under it, giving you a feeling of a cheap device. 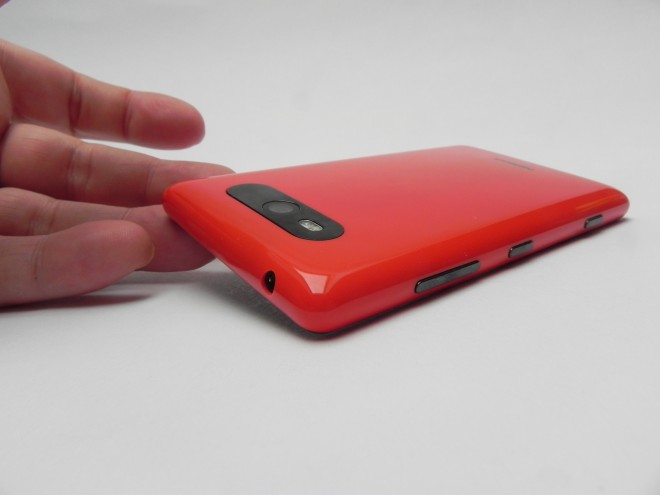 I must also mention that Nokia Lumia 820 adopts a flat AMOLED screen like on the Lumia 900, compared to the curved screen of the Lumia 920. Moving further to the specs, we get HSDPA 42 Mbps connectivity, a 4.3 inch ClearBlack display with 480 x 800 pixel resolution and an 8 megapixel camera at the back with dual LED flash. Upfront there’s a VGA camera and other specs include a Qualcomm MSM8960 dual core 1.5 GHz processor, the Adreno 225 GPU, 8 GB of storage, GPS, Glonass and 1 GB of RAM. 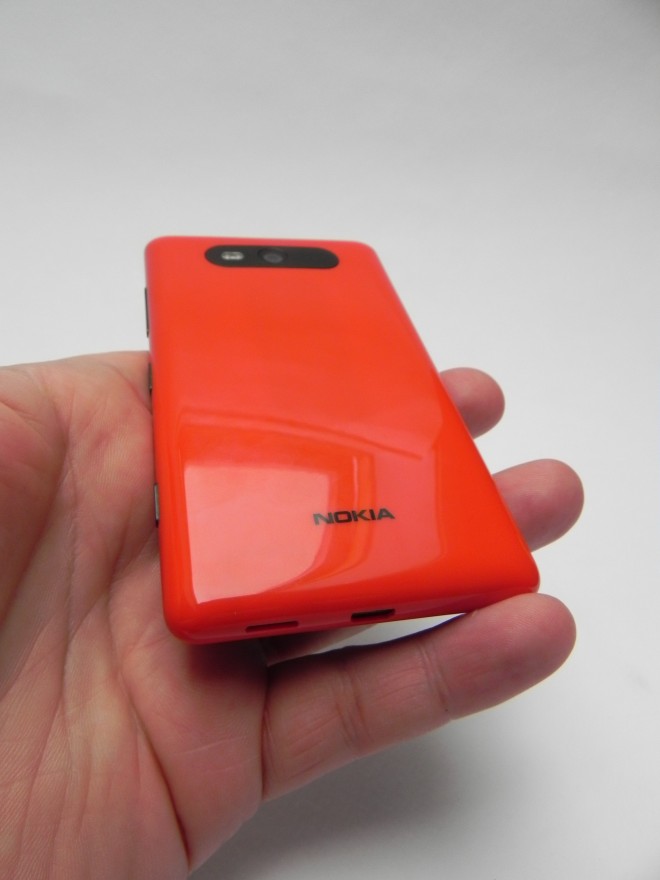 The battery will provide about 8 to 10 hours of intense use, or so it provided to us. Moving to the multimedia abilities, on the audio side we discover a very good volume, very loud speaker, but also a slight distorsion at maximum volume, sadly. The bass is also not that good, but the headphone experience is almost perfect.

We also get Dolby and an equalizer among the audio settings, you should know. On the video side, we get a 4.3 inch 480 x 800 display with RGB Stripe AMOLED setup, ClearBlack technology and deep blacks. It also generates vivid colors and offers bright images. We’ve got good viewing angles and also a decent sunlight behaviour and excellent contrast. 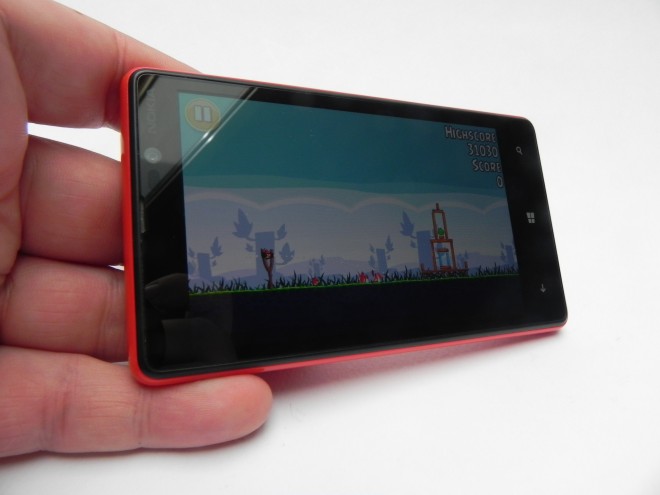 The brightness is very good, as on all Windows Phone devices and remember that there’s no Gorilla Glass here, so don’t go abusing the screen. The screen supports glove and nail input and also has some special options in the settings area. As far as the camera is concerned, there’s an 8 megapixel sensor here, with a quality that may remind some of the Nokia Lumia 900.

As you can see during the review, the camera shutter has a slight lag when taking pics and there’s also a slight lag between the moment of the picture taking and return to the camera UI. Back to the positive things, we have a Carl Zeiss lens available and this camera takes excellent closeups, using the specialized closeup option.

Indoor shots are another story, with grainy photos, while the problem with some outdoor shots is that they’re slightly white-ish. The colors are vivid and almost oversaturated, while the contrast is good. As far as the video capture is concerned, we can go up to full HD in resolution and the result is a clip with 21 Mbps bitrate and 30 FPS. The audio from the video capture is mono at 99 kbps, although the phone has 2 mics. The stabilization during video capture is actually pretty good and overall this is a good camera and could even battle the cam of the Galaxy S III if you ask me. 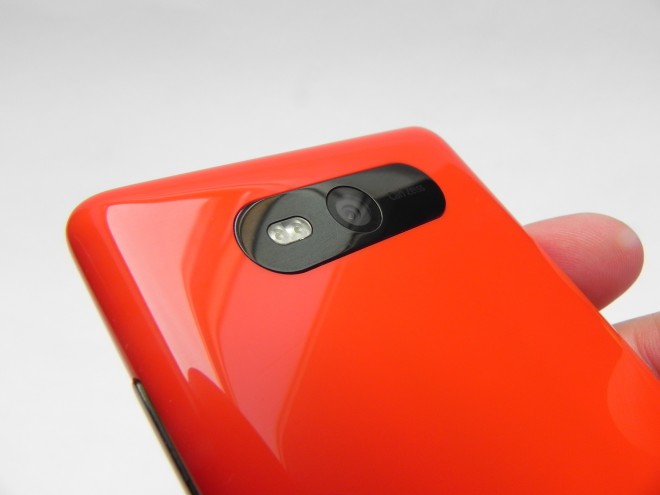 Moving further, to the software we had a look at the web browser and keyboard, the first very fast and the second very comfy to use. In Browsermark we scored 1717 points, while in Sunspider we reached 905 points, which is about the same score as the iPhone 5, which is a compliment. In AnTuTu we scored with the Lumia 820 11.610 points, passing the Lumia 920 and its 10.900 points and being close to the HTC 8X and its 11k+ points.

The calls made from this phone are clear, there’s no signal issue and in the video review we also demoed the unified inbox available on the handset. The Windows Phone Store now holds 145k apps and in the People Hub you find the Rooms system introduced with WP8. It allows you to share chats, calendars, pics and notes with persons from a group. 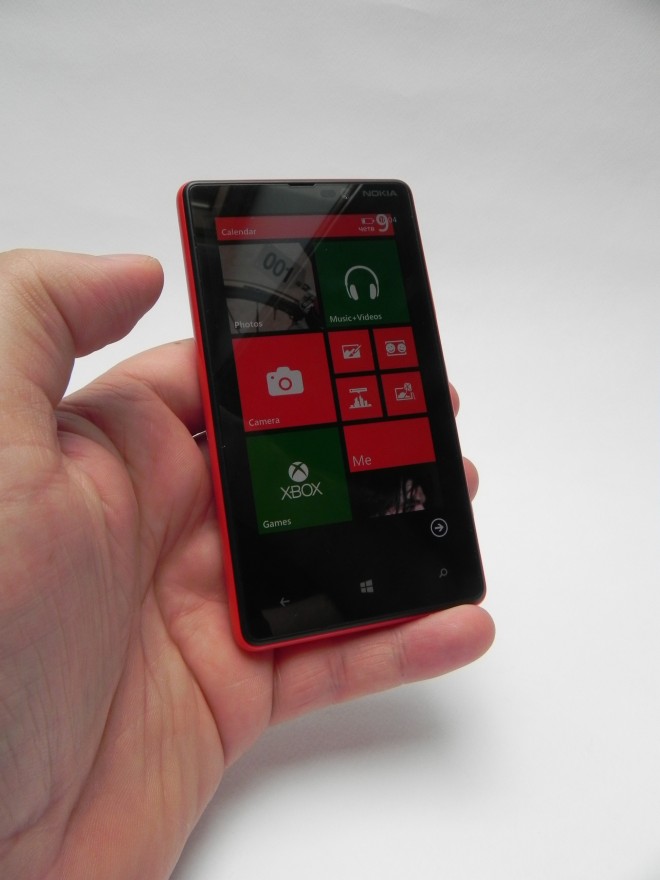 Nokia bundles here the famous Nokia Maps and Nokia Drive applications, the latter branded Here Drive + Beta now and coming with free lifetime voice guided navigation. This service also works offline, it allows you to navigate with a 3D or 2D UI and gives you efficient routes and good guidance. Then comes Office for productivity, City Lens for checking out the hottest spots near you, App Highlights for the person who just bought the phone and Creative Studio for picture tweaking.

And now it’s time for the verdict!

Here are the Pros related to the Lumia 82O: