We all know that when Samsung announces phones, it doesn’t rain, it pours, but this also seems to be the case of Softbank and NTT DoCoMo. These are two of Japan’s most important mobile carriers and they’ve just announced a total of 37 phones over the past 24 hours.

Let’s check out some of the most interesting devices on the list: 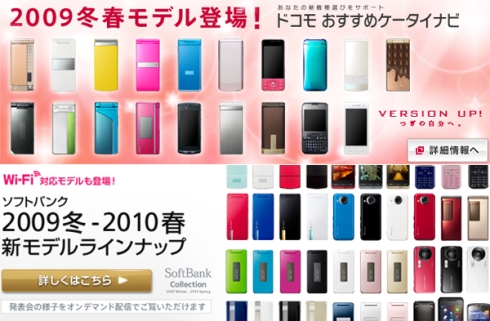 Fujitsu F-02B is also among the freshly launched handsets and it goes as a “jewelry quality” handset, that comes with a snap-on perfume holder. LG L-03B is a handset for tourists, providing support for Korean, Japanese and English languages, while Sharp SH-04B looks like a melting chocolate bar, that being its main appeal.

Fujitsu F-04B features a removable keyboard that works via Bluetooth, a 12.1 megapixel camera and looks like a concept phone shown at CEATEC 2009. Moving on, we discover Panasonic P-01B, a flip phone with a keypad used as a touchpad and Samsung SC-01B, a Windows Mobile 6.5 device that looks like the B7330 model.

These are all NTT DoCoMo models and if you’re interested in Softbank’s offer, they’re selling Android devices, colourful handsets, a localized version of Samsung Jack, dual one seg tuner-sporting handsets and the usual Hello Kitty-branded products.