We’ve covered the Galaxy S20 and Galaxy S20+ phones within the Galaxy S20 lineup and now it’s time for the bigshot, the Samsung Galaxy S20 Ultra. That’s the flagship’s flagship that everybody was expecting and it’s actually a bit of a cameraphone, if you ask me. Cameraphones haven’t been a thing in a while now and only Nokia has been flirting with the segment a little bit. Samsung also wants a serious piece of the pie and proposes a 5G enabled 16 GB RAM beast with a 108 MP camera and 100x zoom. Our impressions are below.

First of all, the device is priced at $1200 and comes only in a 5G version, no 4G here like the S20 and S20+. It’s the tip of the spear, that uses a familiar camera with some tweaks. In spite of the huge diagonal, it was quite easy to wield, I’ll say it. Even easier than the OnePlus 7 Pro and Galaxy Note 10+ to be honest.

Made of glass and metal, this phone has a 8.8 mm waistline and weighs 220 grams. It’s rather big, long and wide, but I could handle it, even though on paper it’s closer to a tablet in diagonal. There’s a rectangular protruding back camera here, quite beefy and large, but it’s also a statement regarding the uniqueness of the camera specs. Samsung also managed to combine the curve of the back side with some minor angular parts to make it fit the palm better and increase grip. 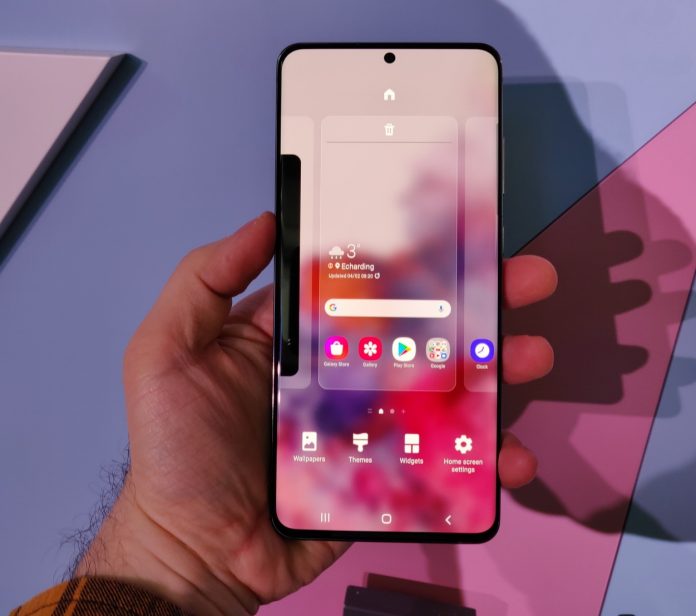 We have a solid, premium build and IP68 certification for dust and waterproofing. We saw the device in black and silver. Notice the separation of the zoom camera from the rest of package to highlight it.

Moving on to the display, we get a Dynamic AMOLED WQHD+ panel with a 6.9 inch diagonal and HDR10+ support. It also has 120 Hz refresh rate, which can be set to 60 Hz from the Settings. Samsung cut a lot from the bezels compared to the predecessor, especially the chin and top. The selfie camera cutout remains a bit large, but so is the resolution. The screen is immersive, less curved than you’d expect, bright, vividly colored and crisp. View angles are wide, contrast is perfect and the black is deep. I feel that it’s brighter than the S10 screen and that the fluidity of the 120 Hz panel makes games look great, particularly Asphalt 9 and Call of Duty Mobile.

There’s no audio jack, but there is Bluetooth 5.0, ANT+, GPS, a Hall Sensor and barometer.

The device runs on Android 10 with One UI 2.1 on top. It keeps the navigation buttons and tabs at the bottom for easier one hand usage, plus it adds Link to Windows, a variety of AI and AR features, plus Quick Share. That’s a feature that reminds us of the Apple AirDrop and lets you transfer files and content easily, plus stream stuff to a Samsung TV set close by. There’s also Bixby Routines, automated actions that tweak the settings and app behaviour at certain times of the day. 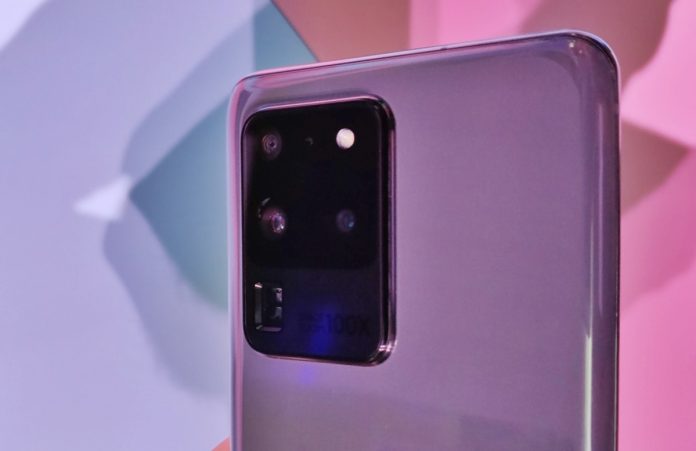 We have finally reached the most important aspect, the camera. There’s a singular front camera here, the 40 MP unit, a big upgrade from the 10 MP units of the S20 and S20+. It has 0.7 micron pixels, but with pixel binning you combine 4 pixels in 1 1.4 micron shot and take a 10 MP shot. We also have dual video call at high quality.

And now here’s the main camera:

Special camera features include Space Zoom, hybrid optical zoom up to 10x and Super Resolution Zoom. You can do 8K 30 FPS video capture and film in 4K 60 FPS with the front and back camera. We’re using the ISOCELL Bright HMX 108 MP sensor from the Xiaomi Mi Note 10, with a special type of ISO setup, that handles very bright light and dark situations. There’s also a system against color contamination of pixels. The combination of 9 pixels into one via Nonacell tech means that we’re getting much more info processed about the shot compared to the older 4 in 1 pixel cameras.

There’s also a new feature called Single Take, which can take pics and vids with all the cameras at the same time and then the AI picks the ideal ones. You can also select the best frames afterwards. There’s still 5x optical zoom here, 10x hybrd and 100x digital. You need steel hands or a tripod to get clear results after 30x or 40x zoom. I like that we have a map of the original subject we zoomed into on the left side of the screen, plus zoom levels on the right side (4x, 10x, 20x etc).

I tried out the 100x thingie zooming onto a building nearby and the results were great with the phone fixed on a tripod. There was a lot of noise but the real achievement is the clarity at 20X and 30X rather than the 100x one. From 50x onwards things get murky. The camera UI is much the same as on the Note 10, allowing you to choose one of the 3 cameras, but separating the 108 MP full resolution shot in the aspect ratio area. It’s very fluid and easy to zoom in, even into higher levels, that’s the impressive bit.

We also have a new type of Super Steady stabilization and a new Pro mode for video capture, with tweaks for the ISO, white balance, shutter, exposure and more. There’s also a nifty “Instant Crop” feature for the 108 MP shots, that only cuts a portion of the image you zoomed into, as large as the screen you’re seeing on the phone. It’s very useful for editing on the go. Having handled the phone for about 15 minutes, I have to say I’m loving the colors caught by the camera and contrasts even in darker environments.

The Night mode has also been revamped from what I gathered.

Samsung Galaxy S20 Ultra is probably the best specced Samsung flagship ever, making zero compromises and providing the best cameras around. It’s as future proof as it gets, between the 16 GB RAM, 5G, 8K video capture, 100x zoom. It should be still powerful in 5 years, unless Samsung goes crazy and delivers even more power. Honestly I can’t imagine going past 16 GB RAM, 5G, 8K video capture and 120 Hz screens anytime soon. It feels like too much at this point. I’d say that the combined pixels are more of an achievement than the zoom or the 108 MP resolution.

They will be key in Night shots and more and I look forward to testing the CPU performance and 5000 mAh battery. The 100x zoom is useful at concerts and soccer matches, the screen is very fluid in games and rather large and the Single Take will prove popular for social media guys and gals. And another impressive thing is that Samsung is biting into cameraphone and even pro camera territory and without a major partnership with the likes of Leica, Canon, Nikon and more…