While everyone is playing with the Nokia Lumia 800, the USA has the chance to get a Lumia 710 quite early and the handset just arrived in the States, where it got a huge launch party in New York. This is the T-Mobile version of the handset, that also gets 4G connectivity. The event also involved a band’s concert and some cute pillows wit the face on the phone on them, such as this one: 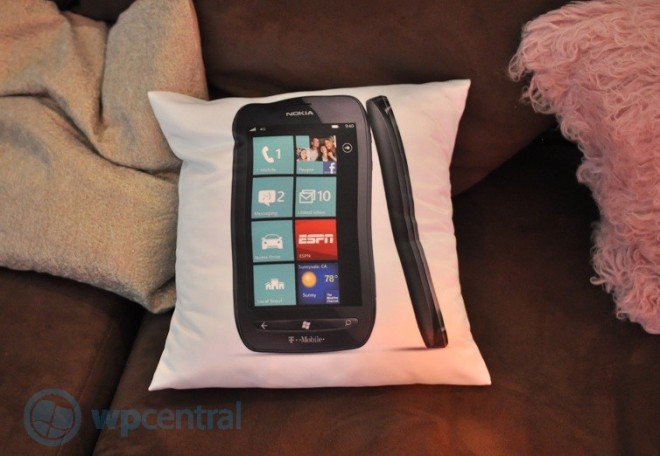 There’s also a hands on video of the handset, straight from the event, if you’re interested. Nokia Lumia 710 comes with a 1.4 GHz processor, a 3.7 inch display (Clear Black), 8GB of internal memory and a low aperture 5 megapixel camera that should please all users. Nokia wants to implement their famous concierge service on this handset, that was pretty famous on Vertu phones. The product will come to T-Mobile in January, with a price tag of $49.95.

Nokia is also expected to have a huge presence at CES 202 in Vegas, where it will probably showcase the Nokia Lumia 900 as well as the Nokia N8 follow-up… probably. The price for the Lumia 710 sounds very good on T-Mobile and it will probably generate lots of sales at this rate, but will people find this single core unit satisfying, considering the dual core and soon quad core LTE handsets that Verizon sells?