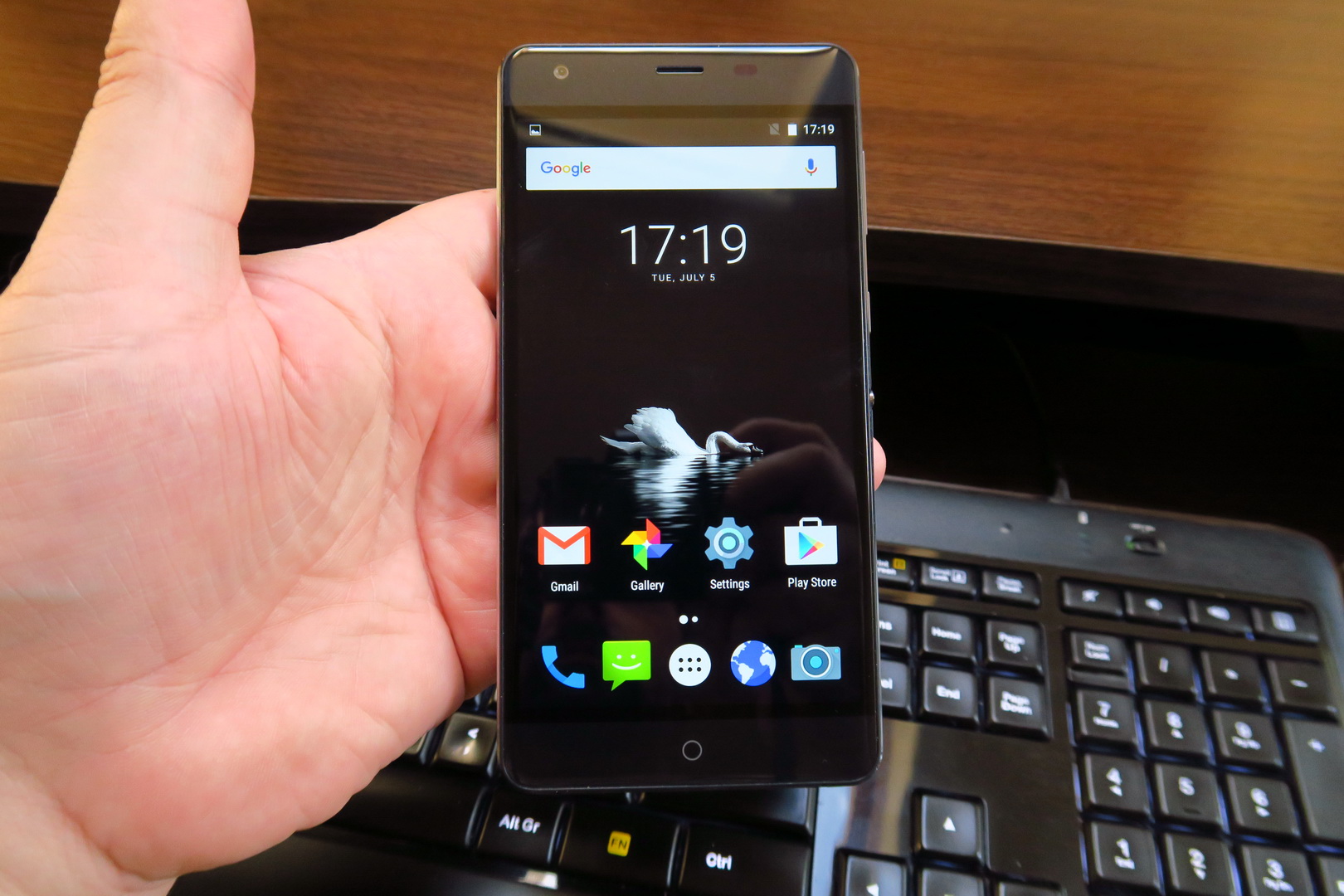 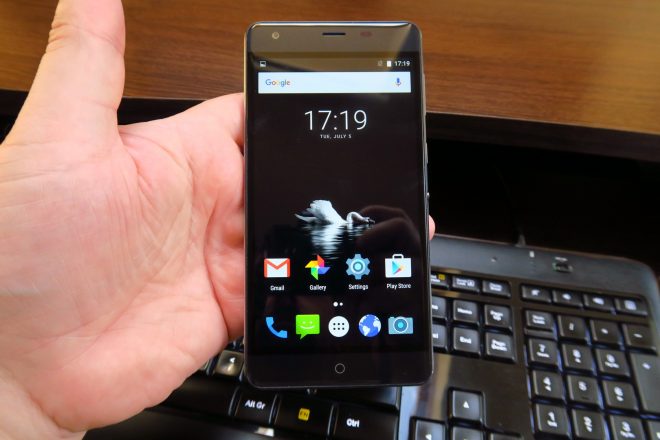 These accessories include an USB OTG cable, case and screen protector. The design of the device is massive and huge and we get a polycarbonate back, that’s glossy and has a criss cross pattern. Buttons have good feedback and there’s a beautiful 2.5D glass panel upfront. The handset has a strong and big metal frame and it measures 9.5 mm in thickness, which makes it slimmer than the 10.6 mm thick ASUS ZenFone Max.

The phone weighs 190 grams, so it’s also lighter than the ASUS ZenFone Max (202 grams). Continuing with comparisons, the Ulefone Power is still thicker than the Gionee Marathon battery phones. This model feels solidly built and comfy in the hand, in spite of the size. Available in blue, white or wooden, the battery phone has a non removable back panel and needs a metal key to access slots. 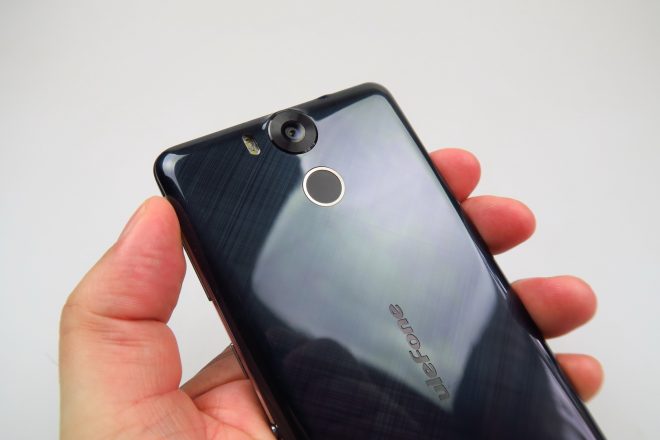 The back edges feel slightly curved and we also noticed the presence of an extra physical button, used to take camera shots. In the end this is a comfy phone, in spite of being massive and it has a solid build. Now let’s see what the display offers. It’s a 5.5 inch Full HD LTPS AUO/IPS LCD panel with 2.5D glass and Gorilla Glass 3 protection.

The video player here has no special options and the screen experience involves good brightness, crisp image, OK colors and wide view angles. The contrast is also pretty OK. Pixels are of the RGB Stripes variety and the luxmeter showed us a value of 402 LUX, which is good and pretty much on par with the Xperia Z3’s 401 LUX. We also surpassed the Sony Xperia Z5 Premium, but scored below the Amazon Fire Phone. 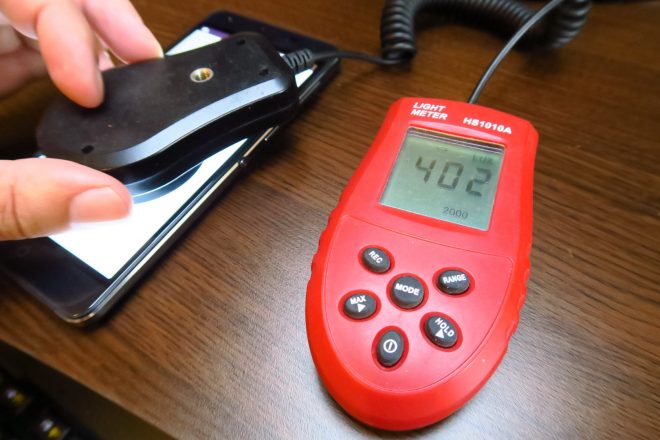 Settings for the screen include brightness, adaptive brightness, LED options, font and rotate screen. The bezels are quite big and overall it’s an OK screen considering the price and basically it has no flaw and comes with good brightness. Moving on to other hardware, the Ulefone Power has a 64 bit octa core MediaTek MT6753 processor, clocked at 1.3 GHz and there’s a Mali T720 GPU in the mix, as well as 3 GB of LPDDR3 RAM.

16 GB of storage are available, plus a microSD card slot and this smartphone doesn’t suffer from lag, in case you were wondering. The UI is fluid and performance is OK, plus apps start up fast. Games run OK, including Riptide GP2, although the device gets very hot after a long period of gaming. Benchmarks placed this model above the Huawei P8 in Quadrant and in AnTuTu we went past the Galaxy A3 and A7 2016, which is no small feat. 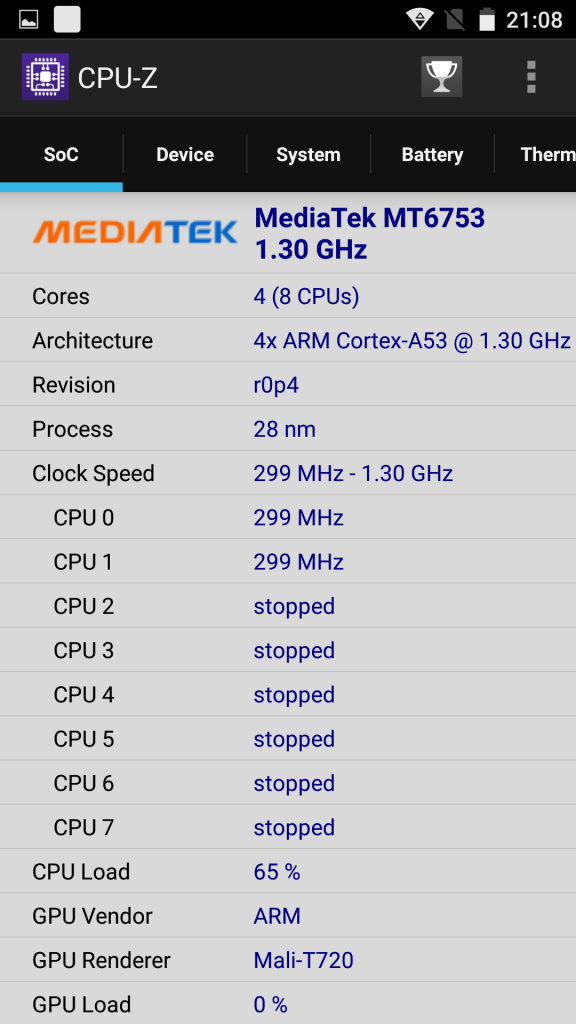 In 3DMark Ice Storm Unlimited, we got a bit past the UMi Touch handset. Interestingly, the GeekBench 3 multi core test result was above the one of the iPhone 6. The temperature tests feature a first run after GFXBench, with just 36.9 degrees, so that’s OK, plus another run after playing Riptide GP2 for 15 minutes, reaching 45.3 degrees Celsius, so serious overheating. 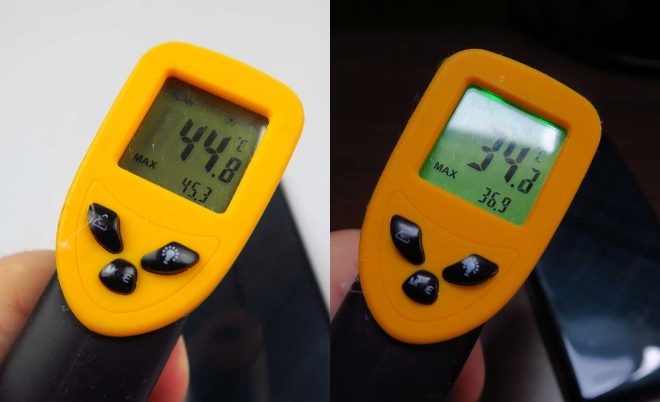 You can really feel the heat if you place your finger on the fingerprint scanner and it can bother you quite a bit. Now let’s see the reason why we’re performing this review: the battery. It’s a 6050 mAh unit, a Sony Li-Po battery that on paper provides 63 hours of talk time, 75 days of standby or 4 days of normal use.

The charger is a 5V/7V/9V and 2A unit and it can go up to 12V and 1.5A. A 5 minute charge offers 2 hours of calling  and a 30 minute charge equals one day of usage. There’s also an USB OTG accessory bundled, used to juice up other devices, like phones or even tablets. When it comes to video playback, we achieved 15 hours and 18 minutes of continuous HD video playback, which is great, but below the Allview P8 Energy and ASUS ZenFone Max, but above the Galaxy S7 Edge. 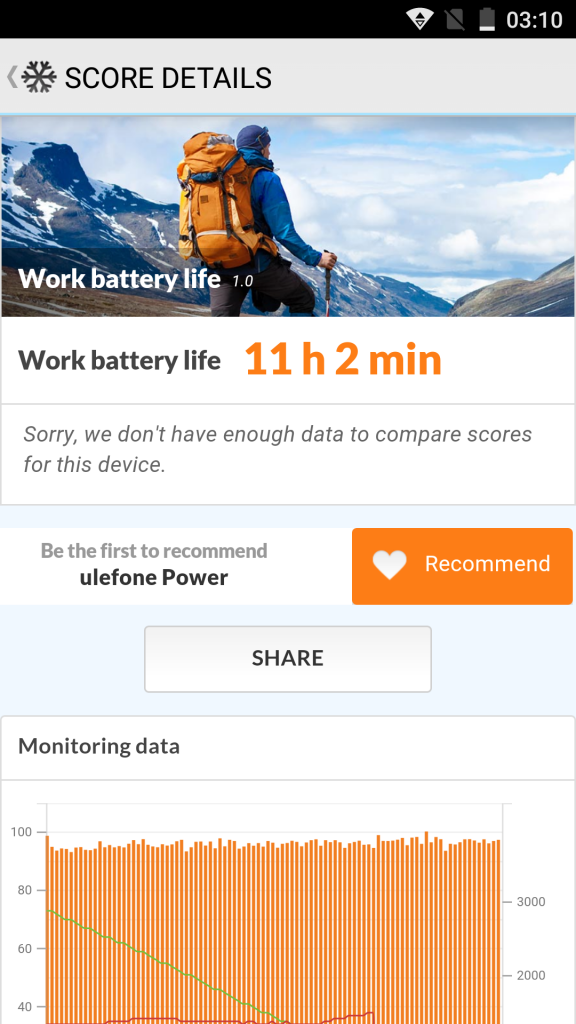 The PCMark continuous usage test offered us 11 hours and 2 minutes, a great result again, but below the Xiaomi Redmi Note 3 Pro by 3 minutes. It also gets beaten by the Allview P8 Energy, but I have to highlight that those models are quite a bit more expensive. Charging is done in 2 hours and 4 minutes, which is excellent for a battery phone of this size.

Battery settings include standby intelligent power saving, battery saver, battery optimization (Doze) and overall this is a great battery. We also did an acoustic test on the Ulefone Power and noticed that the preinstalled player can’t seem to find the songs we had stored on the device. We had to search for them each time. The equalizer was the stock one we’re used to in Android and it includes genre settings, 5 custom frequencies, bass boost and surround sound. 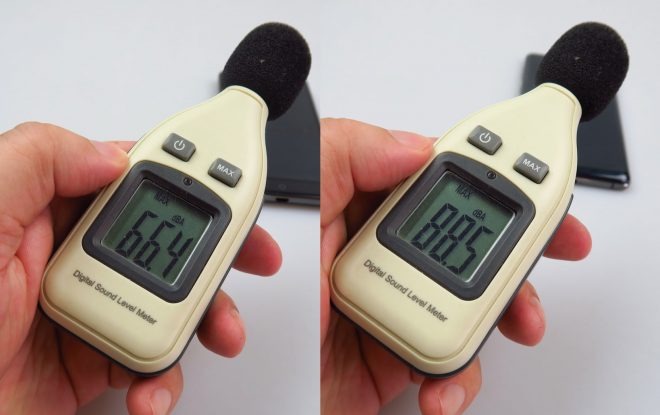 The actual listening experience involved a pretty OK bass, loud volume, good clarity and good high notes. There’s also big muffling on a flat surface, with a huge difference between the front and back. Upfront there’s a 66.4 dBA result achieved by using the decibelmeter, while at the back we got to 88.5 dBA, which is a great result, especially since it surpasses the LG G5 and Huawei P9 Plus.

Settings for the audio experience include Bes Audio Enhance, Bes Loudness and Bes Surround (Movie/Music). Headphones have a flat wire, a big remote and they’re quite comfy. Their sound is muffled and this set of headphones is not loud, that’s for sure. Isolation is only so so. FM radio found stations very fast and overall acoustics felt mixed. 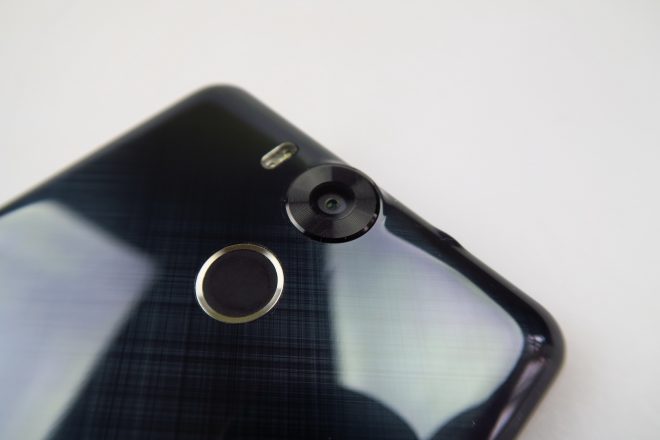 Now it’s time to see what the camera brought, because even though this is a battery phone, the cam still matters. There’s a 13 megapixel back shooter here, with a 4th gen Sony IMX214 sensor and a dual LED flash. We’ve also got F/1.8 aperture and a focus in less than 0.3 seconds. Upfront we find a 5 megapixel shooter for selfies with an Omnivision OV5648 sensor.

By the way in case you feel that the main cam is familiar, you should know that its sensor was present on the OnePlus One, Nexus 6 and Huawei Honor 6. The camera app started fast and the camera itself offered fast focus, OK zoom and reasonably fast picture taking. The options within the UI are Picture in Picture, Panorama, HDR, gestures, flash and the usual GPS, face beauty, exposure, color effect, scene, white balance, hue and saturation, as well as contrast. 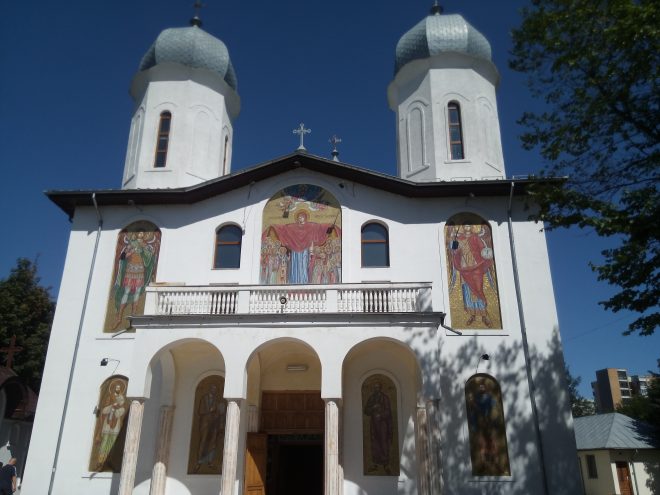 There’s also zero shutter delay, anti shake, ISO and electronic image stabilization. The gallery includes a series of shots with an artificial feel and there’s something like a layer on top of th eimages, making them feel like plastic. It was a very sunny day the one when we took the shots and we registered OK closeups and a reasonable quality kept when zooming in.

The HDR manages to make the images even more burnt, sadly and the selfie was totally not clear and also underwhelming. I zoomed into the shots and found that the details aren’t half bad, so at least there’s that. Some burnt parts of the pictures were present and we had a modest panorama, with a resolution of 6272 x 848 pixels. 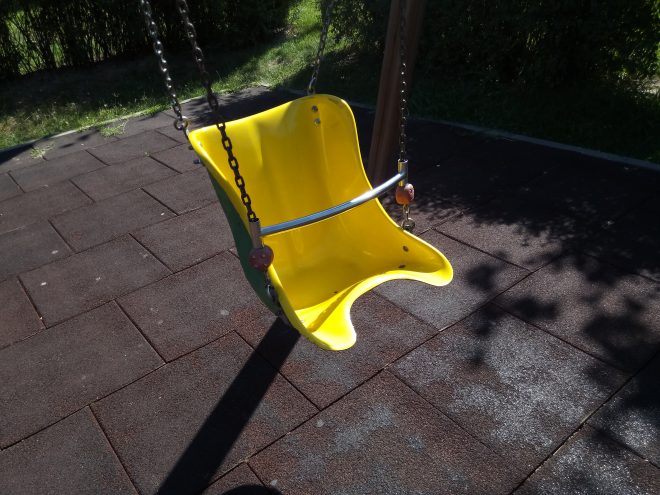 The low light captures were foggy, blurry and just poor. Some of the hydrant shots with flash on were reasonably good and I found the street light halos to be huge, while the buildings had OK texture. Strangely for this camera, some pictures are pretty good and some are very bad. We shot video in 3GPP format, at 18 Mbps bitrate and with a Full HD resolution, at 30 FPS.

The result was a shaky image, also burnt and the zoom brought on quality loss, but at least the colors and mic were OK. We also registered a sudden exposure change and some problems with the wind, plus a blue-ish hue that appears when there’s very much blue in the shot. The upper portions of the shots were also rather blurry, especially for the trees we filmed.

Somehow the focus remained decent even while on the go. Low light video capture offered us 16 FPS frame rate and 5 Mbps bitrate, meaning that the low light vids had ghosting, moved in frames, were shaky and totally poor. I’d forget about video capture with this handset, to be honest and I feel that even the Huawei Honor models which are certainly no landmark in filming surpass it. 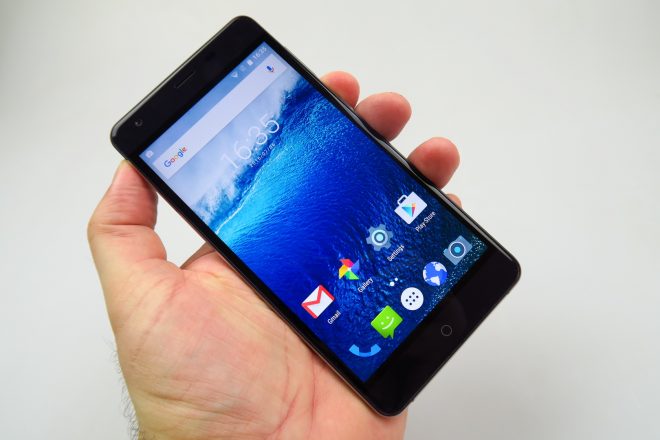 Anyway, back to the more normal stuff, that works, the web browser offered here is kind of slow and has very poor benchmark results. The virtual keyboard is stock and comfy. On the connectivity front, there are dual SIM slots here and dual standby support, plus both SIM slots have 4G LTE support, but only one at a time can use this functionality.

Bluetooth 4.0 is also here, as well as GPS, Glonass, infrared and Hotknot. Miracast, microUSB and USB OTG fill in the blanks. There’s only FDD LTE here, no TDD, keep that in mind. WiFi is if the b/g/n kind. Calls are loud and clear and we had a good microphone, as well as nice signal. Speedtest produced the results 77 Mbps in download and 36 Mbps in upload, so those were quite good. 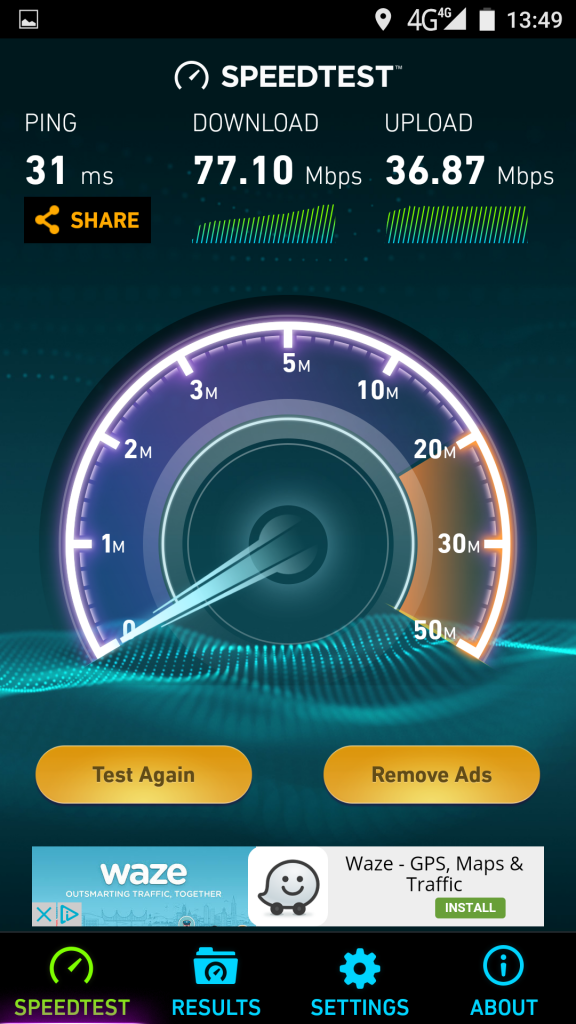 You can also control a TV set and blu ray player using the infrared feature. Now on the OS, UI and apps front, we’re running on Android 6.0 Marshmallow here, mostly in a stock version. We also received 3 big updates during our time of testing the handset, so it’s nice to see such care from the device maker. Multitasking is done in typical carousel fashion and it’s triggered by keeping the Home button pressed.

The dropdown portion features notifications and Quick Settings, while keeping the homescreen pressed triggers the sections Wallpapers, Widgets and Settings, all of them stock. Settings include gesture unlock (double tap to wake, draw letters to trigger apps). The fingerprint scanner has a slow setup and works with the screen off. It’s not very accurate, sadly and it’s also kind of slow. 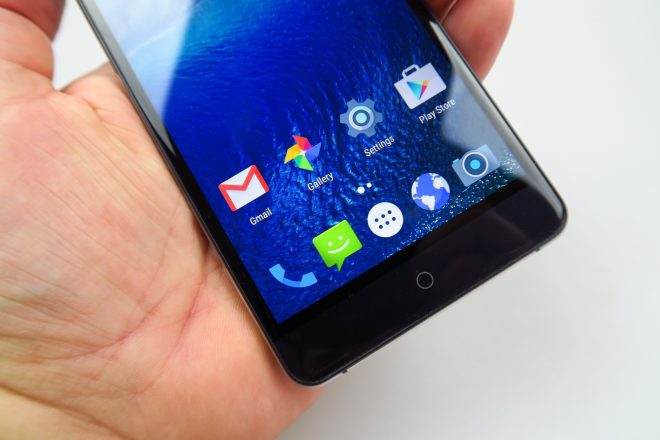 Ulefone included here a function called Somatosensory, which offers the types of gestures from the Galaxy S4, like waving the hand in front of the screen to move in a gallery of pics for example.  The preinstalled apps list has no bloatware and only the bare minimum. There are 26 apps here, which is great and all of them are stock, so nothing to object here.

I guess it’s time for the verdict now, so let’s see the Pros and Cons. 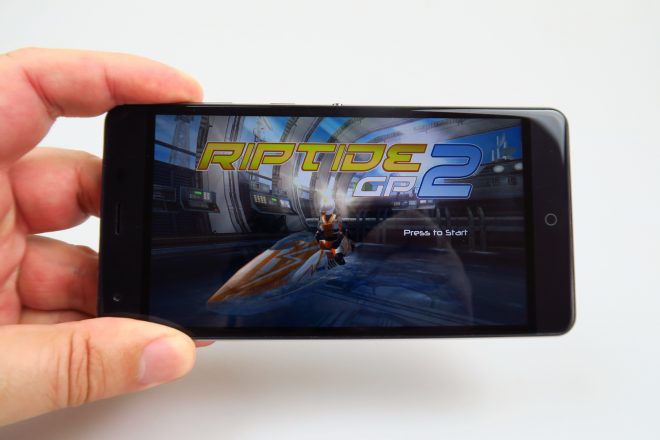 This is a battery phone first and then everything else. It’s a Jekyll and Hyde, with everything that’s good being very good and everything bad being very bad. As a battery phone, very few models are superior and it’s certainly one of the most affordable units in this niche. The poor camera and overheating are probably the worst problems of this device, but once you’re willing to sacrifice those aspects, you may commit to buying it.

For some people having a huge playback and battery life matters more than anything else. And I imagine that battery life just became extra important because of Pokemon GO, so this may also be useful for that. One aspect I surely liked about it was the very clean software. The updated price is here.