Washington Post was wondering if one of the hottest mobile devices of the past years could become even better by getting that Flash support… It’s the iPhone I’m talking about and the neverending “Flash on Apple’s phone” drama.

Yesterday Adobe revealed the new Flash Player for Windows Mobile and Google Android devices, but there was no trace of an iPhone version of it. 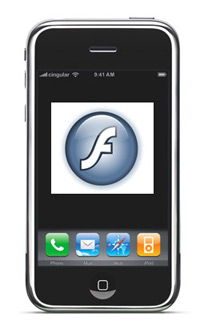 However, one must keep in mind that Adobe are the good guys and they’re working on a Flash version for the iPhone, but Apple have an extremely strict TOS and they don’t quite dig third party software. It’s all about money: you play Flash browser games or watch Hulu.com videos on the iPhone and Apple loses a big part of their cash cow called App Store.

If the iPhone’s creator plans to compete with WM and Android devices, they should loosen that grip on software, as after all  we’re dealing with Flash, a technology that exists on 98% of computers, according to Adobe.