The Apple-Google war continues with a new episode of the saga, this time one that hurts Google and leaves Apple unscathed. Folks who had a look at iPhone OS 4.0, discovered that its browser search button doesn’t bear the Google logo anymore, simply being called “Search”, as you can see in the following image. 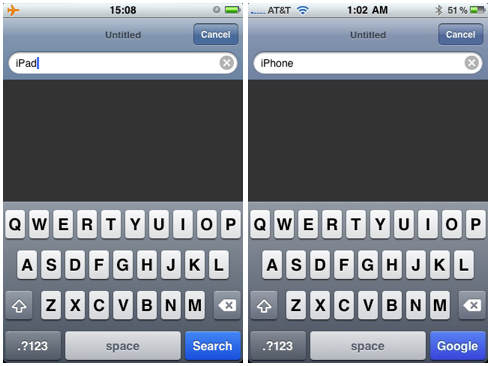 We remind you some of the highlights of these two companies’ duel: Apple rejected Google Voice from the App Store, Erich Schmidt left Apple’s board of directors, Android handsets became iPhone killers and Apple sued HTC, going after Android in the background. There’s also that conference that had Steve Jobs calling Google’s “Don’t be Evil” mantra “BS”.

Right now, Google can say “goodbye” to some of the impressions brought by Mobile Safari, but that’s not going to matter anymore, since all iPhone users will eventually go with Opera Mini, right? As far as the Google button replacement is concerned, this is rumoured to be a move that precedes the implementation of Bing as the default search tool on the iPhone.