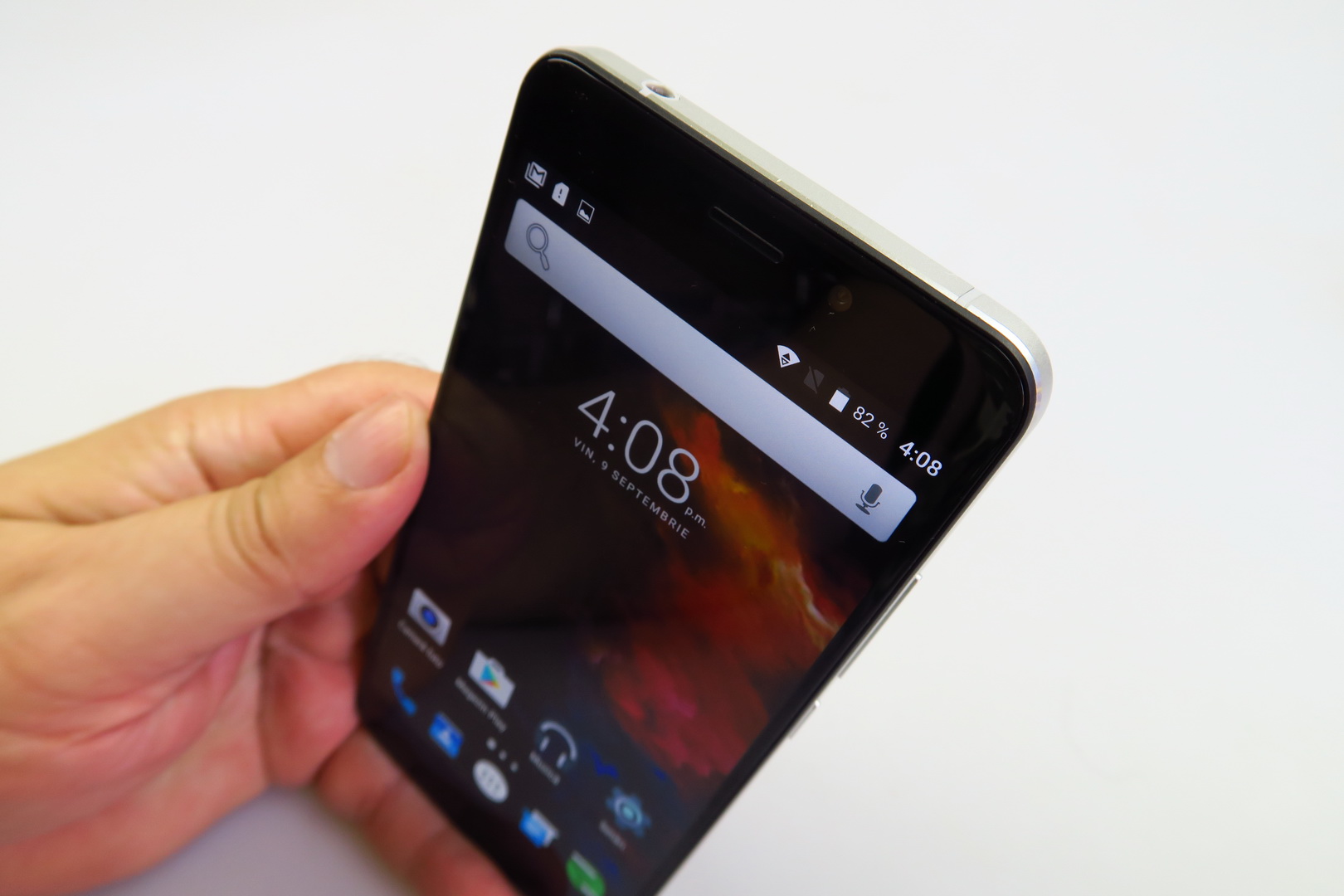 Here we are with a new UMi phone review, this time a device that’s in pole position to get the Android Nougat update next month. The device is UMi Max and we review it over the following lines. This one is a metal phablet, with a massive allure, big battery and a nice design. You can find it on Gearbest for $139 or Everbuying for $220 and more retailers mentioned at the end of the review. 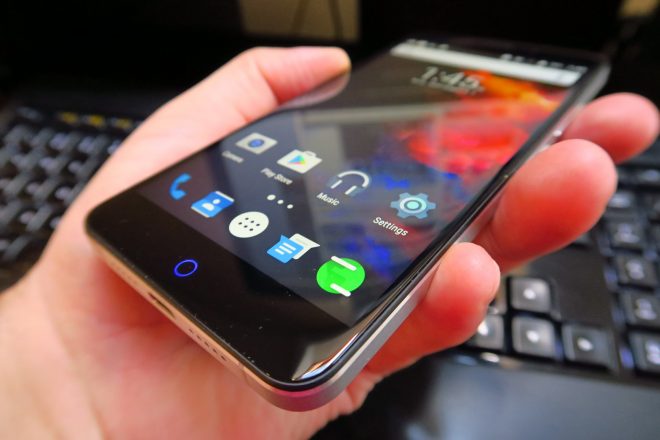 Announced in August, the handset comes in gold or silver and it uses Sharp, MediaTek, Samsung, Panasonic and Sony technology. We’re dealing with a 5.5 inch phablet here, a big and heavy machine that stands out through the “breathing light” thingie, a capacitive Home button/ LED light for notifications. You can actually use it as a button if you activate that feature from the Settings and flanking it are two hidden capacitive buttons.

The phone is made of aluminum and measures 8.5 mm in thickness, plus it weighs 200 grams. Some retailers mention 185 grams, but I tend to believe it’s higher. Upfront we’ve got a pretty 2.5D panel and the device comes with a solid build and a back side that has a “satin” feel. It’s a comfy phone, in spite of the weight and it also brings a slightly rounded back. 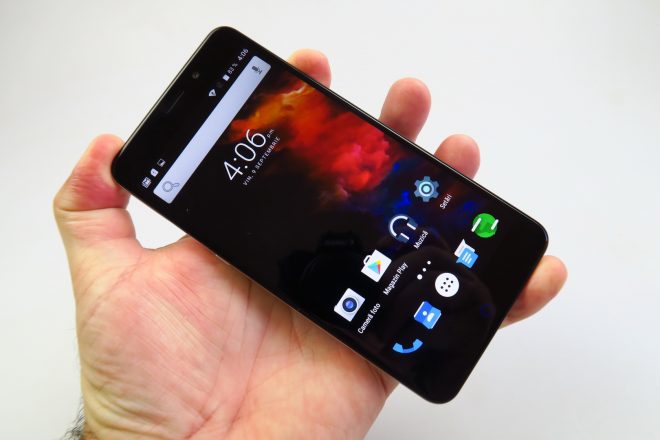 Buttons are comfy and one hand usage is pretty OK. The facade is prettier than the iPhone’s, you better believe it, especially with that breathing light. It’s a nice but heavy phone and the Home button is a bit controversial, reminding me of the one seen on ZTE Nubia and Meizu phones. The display on offer here is a 5.5 inch unit made by Sharp, an IPS LCD with Full HD resolution and 2.5D approach.

There’s Gorilla Glass 3 protection and moving on to the video player, we use the Gallery app here and the viewing experience was bright, crisp, with wide view angles and OK colors, plus a reasonable contrast in sunlight. The screen has narrow bezels and the black is a bit too white. Pixels have an RGB Stripes setup and the luxmeter showed us a value of 418 LUX units, good for the price. 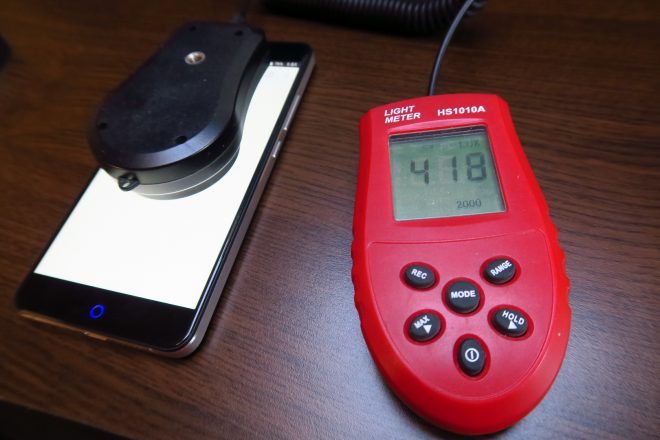 It surpassed the LG Nexus 5X and OnePlus One, but scored below the Sony Xperia E4G and Orange Dive 71. Settings include Miravision options, with a Picture Mode that has the sub options Standard, Vivid, User Mode. The latter also proposes a series of tweaks, like contrast, saturation, brightness, sharpness, color temperature and dynamic contrast.

Color Effect is also here, plus Adaptive Brightness and font size. I’d say that overall this is a good display and there’s not much to object about here. The CPU inside the UMi Max is a MediaTek Helio P10, an octa core unit clocked at 1.8 GHz, with ARM Cortex A53 cores and a Mali T860 GPU. There’s also 3 GB of RAM (Samsung LPDDR3) on board, 16 GB of storage and a microSD card slot. 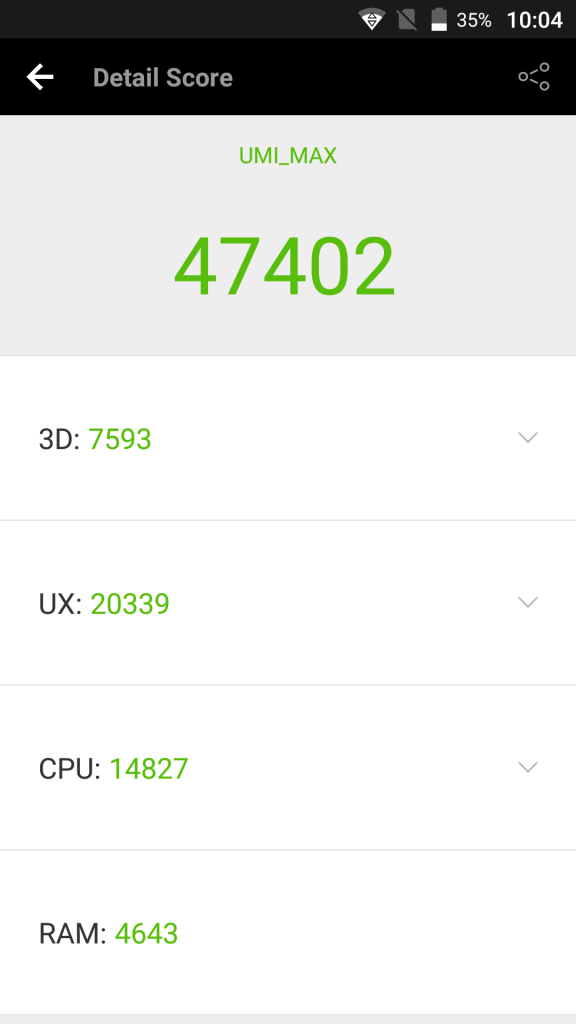 The device doesn’t have any lag and it comes with a fluid UI, fast app start and games such as Riptide GP Renegade work without problems. Benchmarks such as Quadrant placed us a tad below the Galaxy S5 (not bad), while AnTuTu 6 had the UMi Max higher than the Galaxy A5 (2016). Even 3DMark ISU looked OK, with higher results than the BlackBerry Passport. 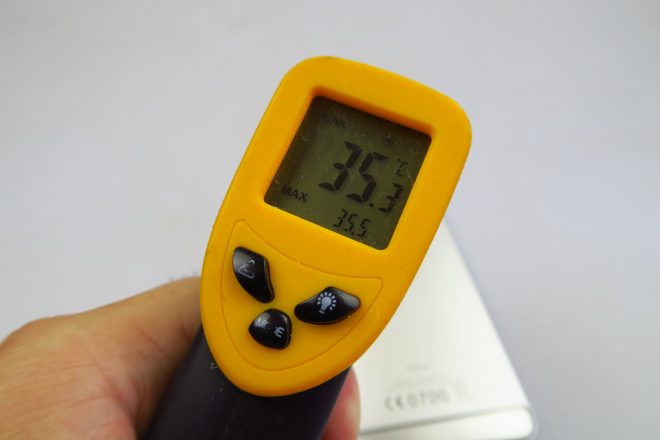 GFXBench wouldn’t run, but we did run the latest Riptide title for 15 minutes and reached only 35.5 degrees Celsius, so there’s no overheating here. The battery is  one of the strong points of the device, with a 4000 mAh capacity and a 4.35 unit available here. On paper it provides 60 hours of music, or 14 hours of GPS navigation, but our HD video playback test revealed a pretty solid 10 hours and 27 minutes, which is great and beats the LeEco Le Max 2, as well as the Galaxy S6.

We did score below the Lenovo Vibe X3 and Galaxy J5 (2016) though. In PCMark we reached 9 hours and 5 minutes, which places the device on the 10th place all time and above the Huawei P9 Plus and Huawei Nova Plus, but below the Galaxy A5 (2016). Charging is a bit on the long side, requiring 3 hours and 40 minutes, which is still better than the UMi Touch’s 4 hours and 32 minutes. 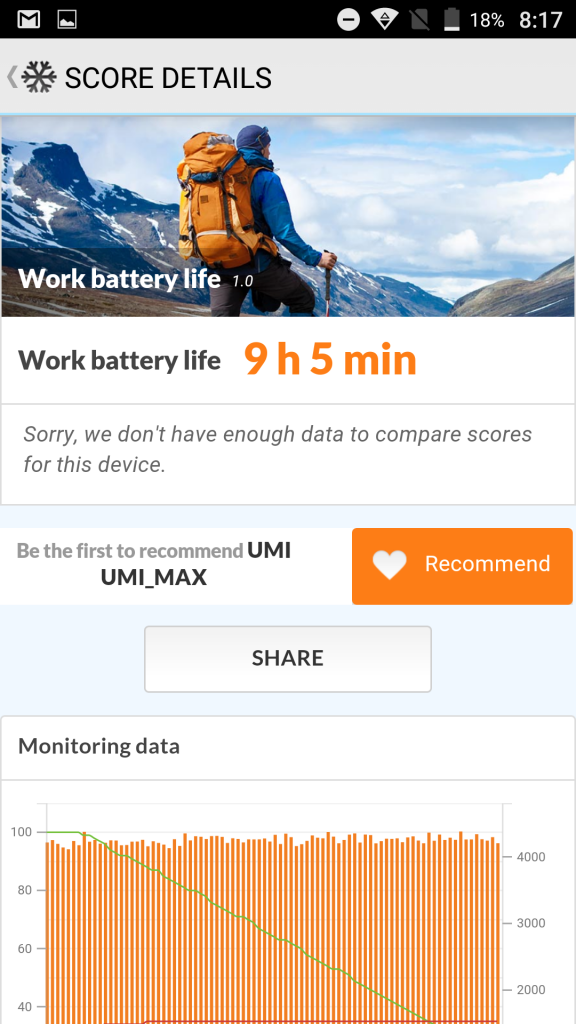 Settings for the battery include Standby Intelligent Power Saving, Doze and a special Battery Saving Mode, with profiles, like Intelligent, Marathon, Sleep and My Mode. The latter can be customized, with a gray UI, Easy Mode, sleep and brightness settings, GPS, vibration options and overall I have to say it’s a good battery, that justifies the weight of the device.

Now let’s discuss the acoustics. The device comes with HiFi+ audio and promises clear vocals, deep bass, BES Atmos and Smart PA tech. It doesn’t have bundled headphones and only the right grille at the bottom hides a speaker. Interestingly it’s impossible to muffle the lower area and cover up the sound somehow, no matter what you do. 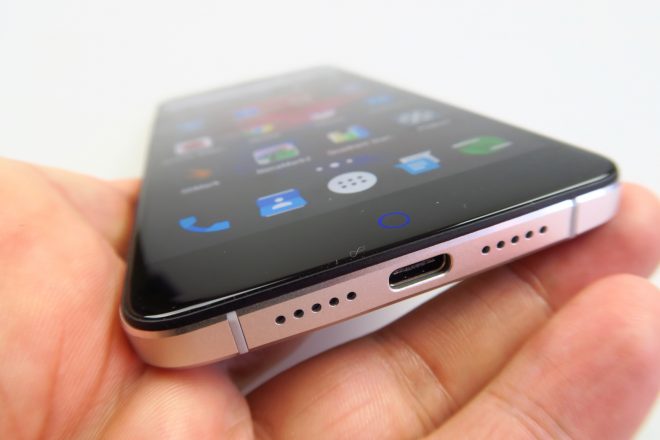 The music player preinstalled here comes with a stock approach and a stock EQ. It brings options related to music genres, 5 custom channels, bass boost, surround and reverb. It all feels louder with the EQ off. The acoustic experience is loud and clear, the guitar is good and there’s also a slight distortion at max volume. The bass was rather OK and voice was nicely rendered.

We did a decibelmeter test and achieved 80 dBA, which is a modest result and actually feels louder with regular use. It surpasses the LG V10 and Xperia Z3, plus scores below the Huawei P9 Lite. Settings include a Sound Enhancement section, with BES Audio Enhance, BES Loudness, BES Surround and overall I’d say acoustics are OK, but the volume could be higher. 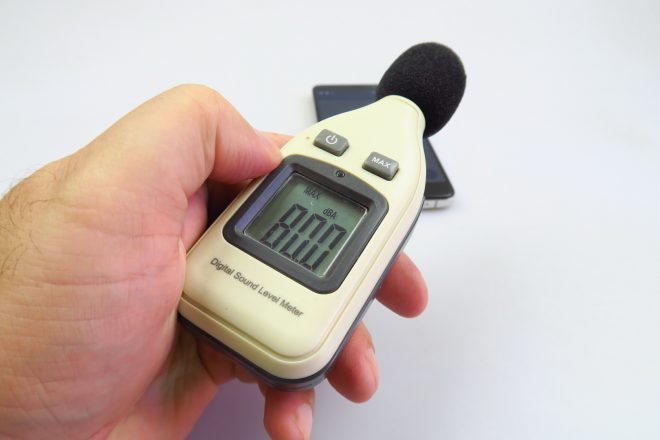 There’s also FM radio, in case you’re wondering. This device comes with a Panasonic main camera with a 13 MP resolution and a front 5 MP shooter. On paper we are promised zero shutter lag, 0.5 second launch and 0.3 second focus. There’s also a dual tone flash at the back. The camera app starts up slow and offers slow zoom, slow focus and moderate speed of picture taking. 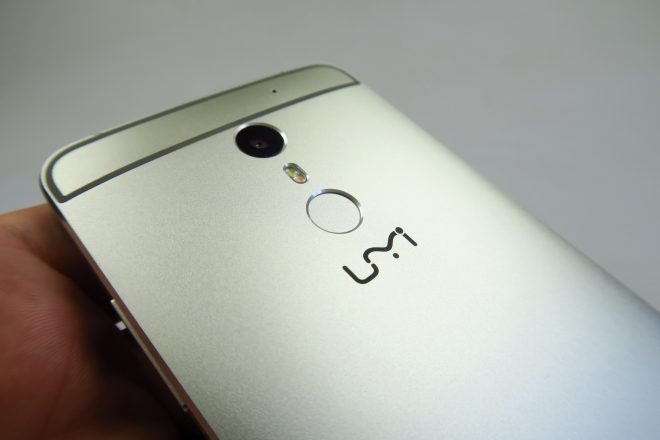 The gallery of day time shots include captures taken on a very sunny day with 33+ degrees Celsius in September. There’s a slight sepia hue on top of pictures, one that we didn’t apply, but rather the camera misreading the scenery. Details are OK in both landscape and closeups, but some shots were seriously burnt. Picture in Picture is a gimmick and colors were OK-ish in some shots taken in the shadow.

Closeups of the toys in the park were nice and clarity was also good. HDR was washed out and zoom in quality was excellent, even with the max level on. Selfies were unimpressive, ratehr blurry and washed out. There’s no gloss here, you won’t see that typical “shine” of quality cameras, that we get on a Samsung or iPhone model. 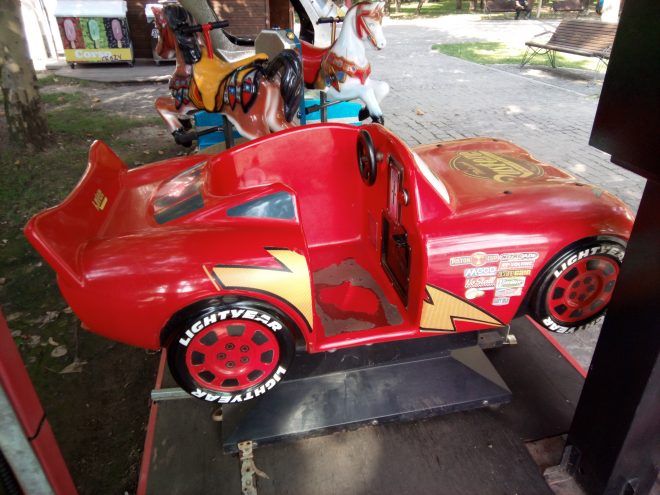 Undersaturation also happens and the best thing about the main camera remain the very good closeups. Lighting and details were OK, but tree leaves get a bit fuzzy in the distance. Panorama has a modest resolution of, 6336 x 896 pixels, but clarity was OK. Too bad it was rather curved… Looking back at the captures taken with the UMi Touch, I can’t help but feel that that phone was slightly better and so was the Vernee Thor.

Low light capture brought us a very good flash, grainy images, OK texture for that wall, big halos and somehow there’s a violet hue appearing out of nowhere. There’s also a bit of blur and overall, it doesn’t quite impress us. Videos were shot in 3GPP format, in Full HD, at 30 FPS and 17 Mbps. I was rather poor, covered with that “sepia”, shaky, but the microphone was OK. 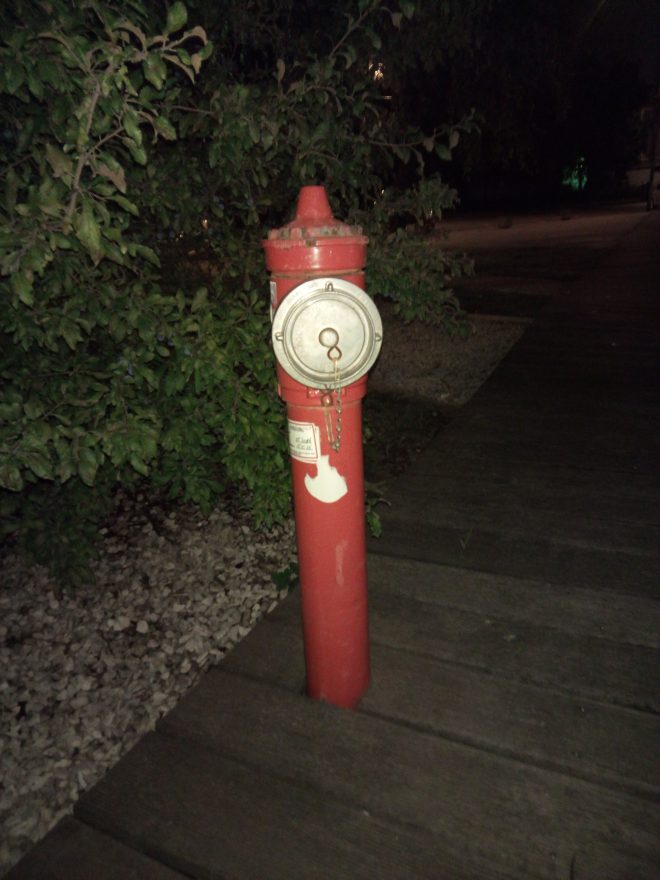 There’s some detail loss when zooming in and the videos were blurry, burnt and suffered from some refocusing. Strange exposure changes also happened and the wind couldn’t be faced properly by the mic. Even for the price, I expected a bit more. Low light capture is a total letdown, with 7 FPS and 2 Mbps, basically a video moving in frames, sort of like a glorified GIF.

You can forget about filming and only be content with closeups here. As far as the web browser goes, it’s rather slow and has poor benchmarks, so using Chrome is a better idea. The virtual keyboard is stock here and now let’s move on to connectivity. This device has an USB Type C port, hybrid dual SIM Tray (microSD and micro SIM) and both SIMs are 4G compatible.

4G LTE is of the FDD kind and there’s also WiFi a/b/g/n support. Bluetooth 4.1, GPS and OTG are supported here and there’s no NFC or WiFi Direct. Turbo Download is a feature provided by UMi, letting you use both 4G and WiFi at the same time for faster downloads. Calls were loud and clear, there was good noise cancelling and good signal. We also did a Speedtest analysis, achieving 76 Mbps in download via WiFi and 21 Mpbs in upload, which is not bad. 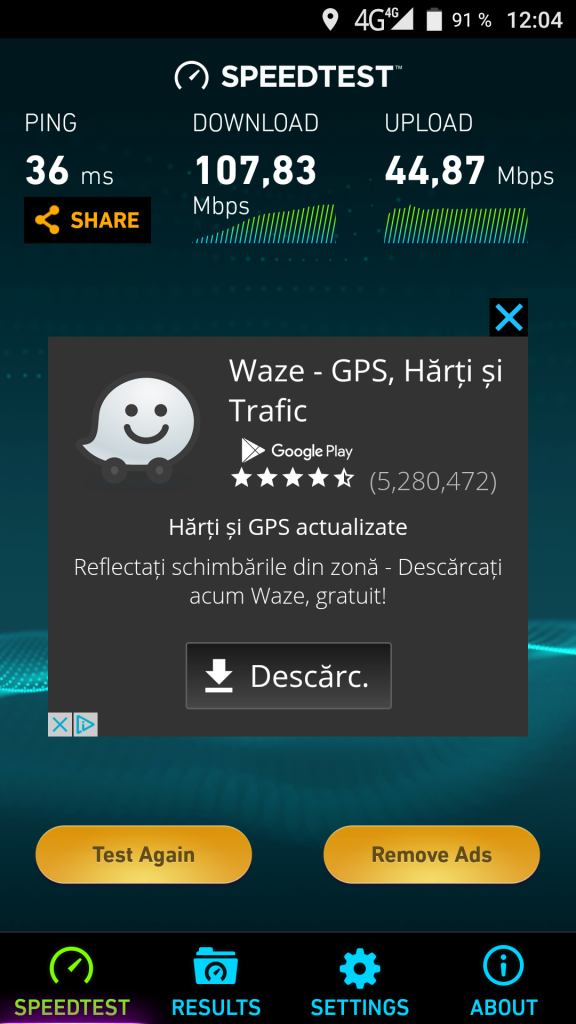 The 4G test revealed a result of 107 Mbps in download and 44 Mpbs in upload, excellent results. As far as the OS, UI and apps are concerned, the UMi Max comes with Android 6.0 Marshmallow, without too many tweaks, luckily. Icons and widgets are stock and the dropdown area still includes notifications and Quick Settings. Multitasking involves a carousel and the virtual buttons can be hidden, in case you want more screen estate.

Settings include a Harlequinn LED Notification option, where you can set the colors of the breathing light, for missed notifications, charging, low battery and more. The fingerprint scanner uses a 14 step setup and has a medium level speed of unlocking, plus a vibration effect before the actual unlock. There’s also a side button used to access apps and features, basically a customizable physical shortcut button. 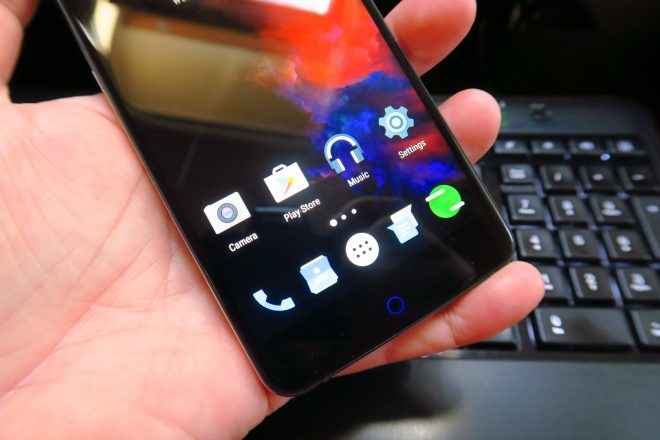 You can also tweak the virtual buttons at the bottom of the screen and when it comes to the preinstalled apps list, there’s 25 of them which is great and there’s no useless stuff here. All are stocck apps, including Maps, File Manager, Calendar and the best thing about it is the arrival of Android Nougat in December. And now it’s time for the verdict.

This remains a great midranger considering the price tag and a device with a very nice LED upfront. It’s solid enough for games, Facebook and long usage in media playback, but also very heavy. It could be used for a nature retreat, Pokemon GO long sessions and media playing. The camera should be better and maybe it’ll get some fixes with the Nougat update.

Otherwise it’s a pretty solid phablet, at the following prices: