We hope AdMob is going to supply us all with its cool statistics even after the Google buyout thing is done, but right now we’ve managed to have a look at a new bunch of figures from the mobile advertising company. They show the evolution of Android handsets and iPhones both in the US and internationally. 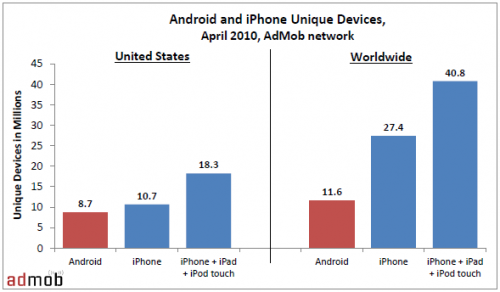 At this moment Google claims it’s activating 100,000 Android phones a day, as it starts to catch up with Apple’s iPhone. The latter sold an impressive amount of 85 million units (iPod touch included0 over the past 3 years. There’s a geographical difference in demand, with 75% of Android usage being based in the US, while 49% of the iPhone OS devices are in the same region.

These numbers refer strictly to devices that display the ads from the AdMob network, so they might be a bit different overall. As far as US sales are concerned, 10.7 million iPhones have been sold in the country versus 8.7 million Android handsets. Internationally, the iPhone reigns, with 27.4 million units versus Android’s 11.6 million.

We guess that the release of Froyo and a couple of pretty hot new smartphones will change the game for Android, but there’s also a new iPhone coming…