As Google I/O and the debut of Android 2.2 approaches, we’ve just stumbled upon the very first screenshot of the OS also known as Froyo. Published on Twitter, courtesy of user @pixeladdikt, the image was captured from a video posted on Adobe employee Ryan Stewart’s blog. 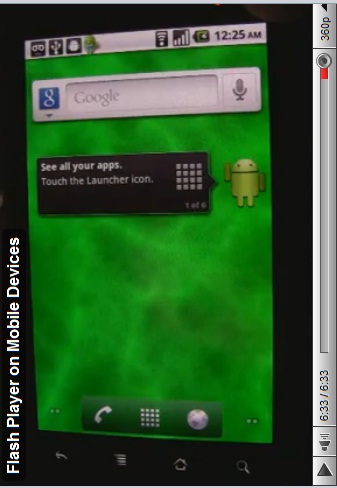 Said video was meant to showcase Android’s Flash 10.1 functions and it all seemed to be running neatly, as shown in the vid. This tiny glimpse into the future of Android shows an updated launcher on Froyo, allowing you to launch an app list, as well as a phone dialer or the browser on the device.

Also, if you have a look at the search bar, you’ll find that under the Google icon there’s a small arrow, that might give you access to more search engines or maybe allow you to select which parts of the handset to search. Also, there’s the little green robot (Android) on screen, ready for a tutorial sessions, useful for those not familiar with the OS.

What do you say? Does Android 2.2 live up to your expectations?