A recent study performed by NPD and based on 150,000 responses found that Android is outselling the iPhone in the States for the first time. In Q1 2010, Google handsets like Moto Droid and HTC Droid Eris helped Android reach 28% of the market, while Apple’s handset only got to 21%. 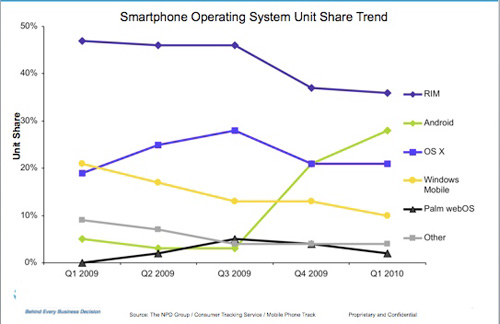 BlackBerries are still on top, with 36%, but still they lost 6% as Android climbed. Verizon is the one to praise for this increase of market share, thanks to its successful Droid line, plus the Buy One Get One promotion. Meanwhile, AT&T is still the leading carrier, with 32% of all US smartphone sales, while Verizon is immediately behind with 30%.