FCC has just approved the uber-smartphone HTC EVO 4G and already Sprint employees are training for the big launch event. As far as official documents are concerned, they mention that this is a WiMAX and CDMA device, with support for Sprint’s bands. 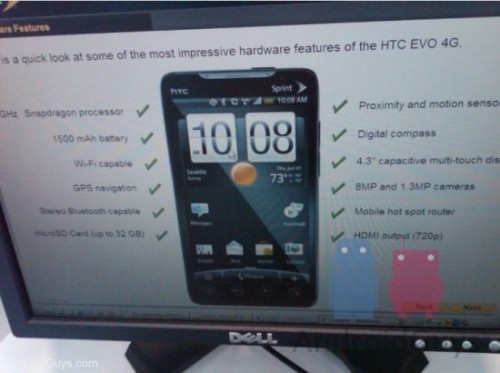 Codenamed PC36100, HTC EVO 4G will arrive with Sprint’s preinstalled apps, among which there’s NASCAR, Sprint Navigation and many more. FM radio is also on the device, although we don’t know if it’s supported thanks to a kickstand working as an antenna or a regular antenna.

The volume rocker on the phone will be used as a navigation button while in menus, an interesting feature for people looking for optical trackpads and trackballs. As far as the specs are concerned, HTC EVO 4G features a 1500 mAh battery, a 4.3 inch multitouch capacitive touchscreen, WiFi, GPS, a microSD card slot, digital compass and an 8 megapixel camera.