A couple of lucky folks in China managed to score a Lenovo LePhone handset back in April and now they’ve started publishing details about the device. The guys of Sooyuu have reviewed the phone, just ahead of the May launch. Apparently, some changes were made to the unit shown by Lenovo back at CES 2010. 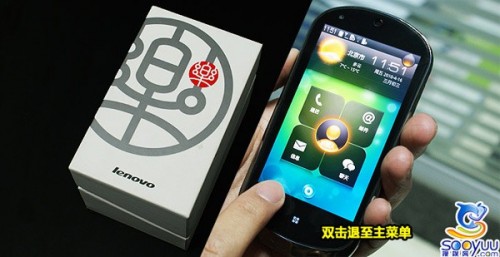 We’ve found out that the initial 3.7 inch LCD display was replaced with an AMOLED screen and just like Palm Pre, the LePhone features a gesture area below the screen. The device is bundled with a leather case, a noise-isolation handsfree kit (without music and volume control) and a magnetic dock adapter.

The review of the Sooyuu site mentions that the customized version of Android running on the Lenovo phone works smoothly and that social networking features are great, plus there’s a neat music store, video apps and a great Chinese turn-by-turn navigation suite. The only drawback on the LePhone is its 3.2 megapixel camera with mediocre quality (it lacks flash and autofocus).