We’ve detailed Froyo a couple of times on this site, with the whole Google I/O craziness and all, but it seems two essential aspects escaped us. For one, Android 2.2 will add over-the-air app installation to its software and also, we’ve learned that iTunes streaming will be supported on the platform. 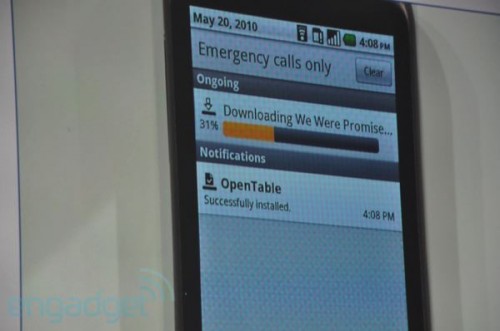 OTA installation is extremely simple: if you’re browsing to an app on your desktop PC, you can push it to your handset and install with a single click. All of this is done over the air and Google also demoed a similar method for music purchases on Android Marketplace. Deeper push integration, anyone?

The other thing that we’ve found out is that Google bought a company named Simplify Media, the makers of a desktop software allowing users to stream music from iTunes to their phones. There was even a demo involved, which was quite slick: you open the app and push all the music instantly to the handset.