Google has recently demoed a bunch of new features and services associated to its search engine, at the Computer History Museum. Among the showcased features there was also a real time search function, allowing the user conducting a search to see live updates from people on Twitter, FriendFeed and other such similar services. 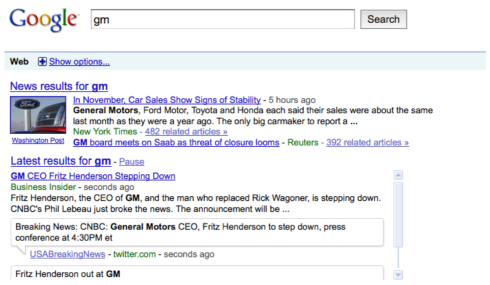 If relevant, the Tweets and social networking updates will be shown among the results. This real time search feature allows the user to come across breaking news, via tweets, blogs and other web content. A filter of results is also available, if you only want to see microblog updates for instance.

The iPhone and Android devices also support this feature and you have to know that the Google Search includes “hot topics” in Google Trends to show the most popular topics that are being published in real time. The search engine giant also announced Goggles and demoed the service, based on visual recognition and display of search results based on an object’s visual signature.

[via google blog and techcrunch]