The folks of iFixit are at it again, dissecting the iPad 3G and finding out that its LCD frame is used as a giant 3G antenna, to get better reception. We would have thought that the aluminum unibody casing on the device blocked AT&T’s signal, but the problem has been solved, apparently. 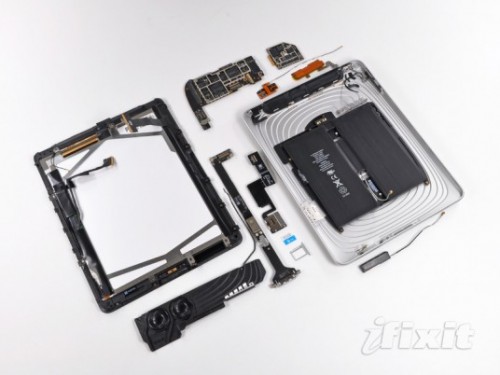 The black plastic insert close to the top of the tablet also plays a part in the quality of the reception, allowing radio signals to pass with ease. A bonus of the 3G iPad is also the presence of a GPS receiver, one that was not present on the WiFi version of the Apple tablet. Also, iFixit’s teardown revealed that this GPS chipset is superior to the one on the iPhone 3GS.

Maybe you’re wondering how Apple managed to squeeze extra hardware inside the same space as the one of the WiFi iPad… For starters, the radio antenna is placed under the black plastic insert of the tablet, then the LCD frame is also used as an antenna and the GPS chipset somehow found room, too.