The folks of displaymate.com have recently made a scientific analysis, comparing the Apple iPhone LCD to the OLED display on the Nexus One. The iPhone 3GS’ screen is not perfect, but it seems that it’s better than the one on the Google Nexus One. 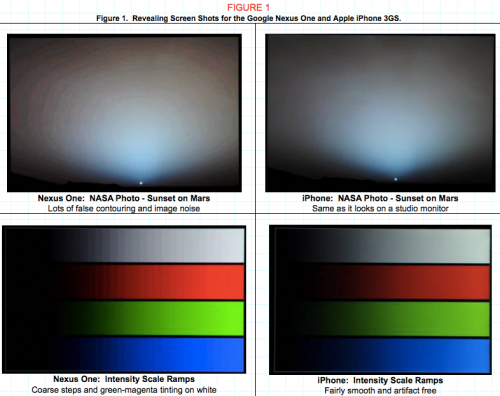 The analysts claim that the HTC Google Phone might seem to provide eye candy, but it suffers from noise and lack of accuracy. This screen supports a 800 x 480 resolution, higher than the iPhone’s 480 x 320. Nexus One’s display is made by Samsung and it uses a PenTile pixel arrangement, less sharper than the LCD equivalent.

Moving on to the iPhone, we learn that its screen supports 18 bit color and it can even emulate 24 bit color with dithering. Nexus One only uses 16 bit color, allowing 32 possible intensity levels for red and blue and 64 for green. Another flaw is that the factory Calibration and quality control are very poor.