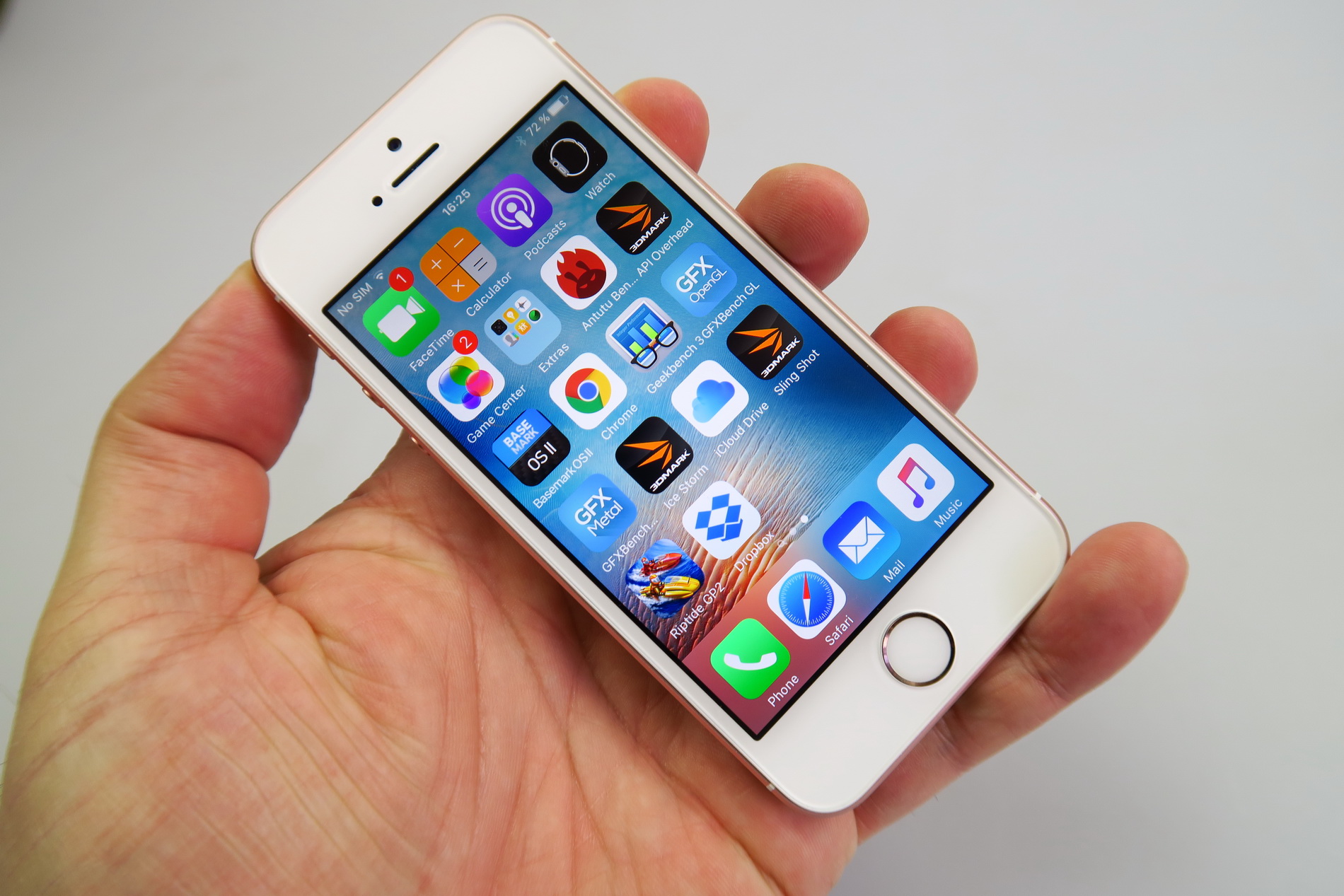 Only Apple is able to generate a huge amount of hype by launching a 4 inch phone just when people got used to the fact that a 5.5 inch phone isn’t considered a phablet anymore, but rather “just a phone”. Anyway, they did that in March, when they debuted the iPhone SE and below you can check out its review. We’re dealing with a 4 inch handset, that mimics the design of the iPhone 5s and it’s priced at $399. 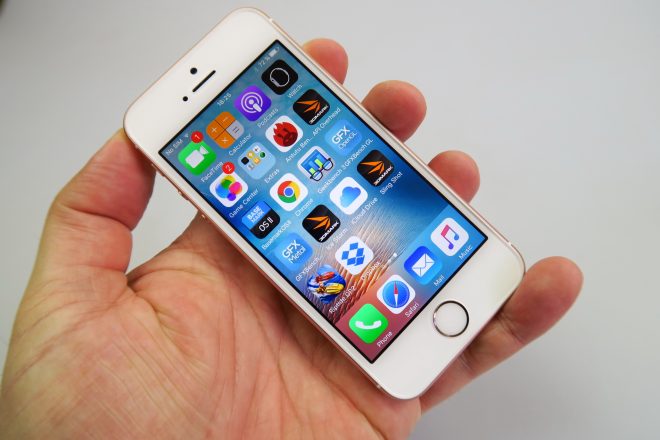 That’s the 16 GB version with the lower price and the 64 GB model goes for $499. As we mentioned, the design is virtually identical to the one of the iPhone 5s and the phone comes in silver, gold, space gray and rose gold. iPhone SE measures 7.6 mm in thickness, weighs 113 grams, while the 5s measured 7.6 mm in thickness and weighed 112 grams. It has the same width and length and it’s a 4 incher that’s comfy and offers a good grip.

This device provides a solid aluminum unibody design, but its rectangular edges aren’t as comfy as the more rounded ones from the iPhone 6s and iPhone 6. This light and compact smartphone feels familiar, like going back to an old friend or schoolmate. It provides comfy buttons and it has glass or ceramic at the top and bottom of the back. One hand usage is superb and this is a premium and comfy product, overall. 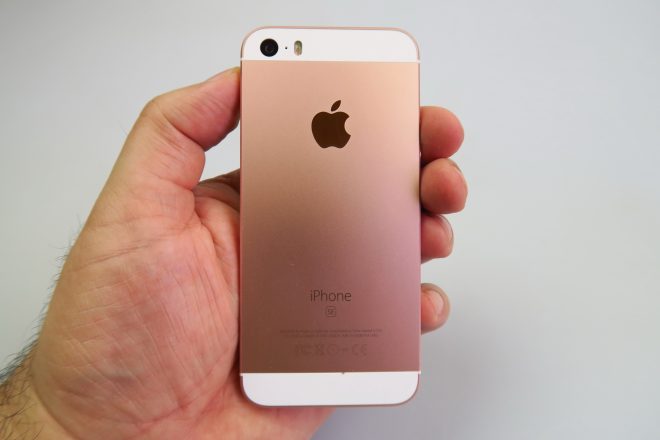 On the hardware side, there’s a 4 inch IPS LCD screen in the mix, with LED backlight and a 640 x 1136 pixel resolution. That’s the same diagonal and resolution as both the iPhone 5s and iPhone 5. The display provides an 800:1 contrast ratio, at least on paper and it comes with big bezels, for current standards. The screen has oleophobic coating and adopts the full sRGB standard.

The experience we had with this screen involved good brightness, very well calibrated colors and wide view angles. We also had good contrast, even in full sunlight, but there was no 3D Touch, in case you’re wondering. Pixels are of the RGB Stripes variety and when we used the luxmeter to measure brightness, we found something odd: the brightness was not uniform, since the upper portion of the display was yellow-ish and reached 266 LUX, while the mid and lower section got to 479 LUX, which is a very good result. 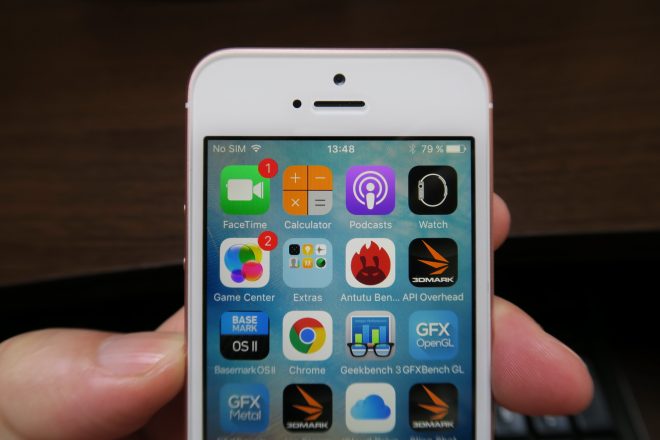 Taking this into account, opting for OLED for future models seems a sound idea. In the meantime, the 479 LUX units mean we surpassed the OnePlus 2, Lenovo Vibe X3, but we’re below the Huawei P9. Settings for this screen include brightness, text size, bold text and the famous Night Shift, that came with iOS 9. It can be set to Scheduled, Manually Till Tomorrow and also has a color temperature slider (with warmer and cooler options).

Night Shift basically cancels the cold colors and especially blue hues of the screen, that are said to damage your sleeping patterns. So, overall the screen is good, but not on par with the one of the iPhone 6. Back to the hardware, the iPhone SE provides a dual core Apple A9 processor, with Twister cores clocked at 1.84 GHz, a PowerVR GT7600 GPU and 2 GB of LPDDR4 RAM. 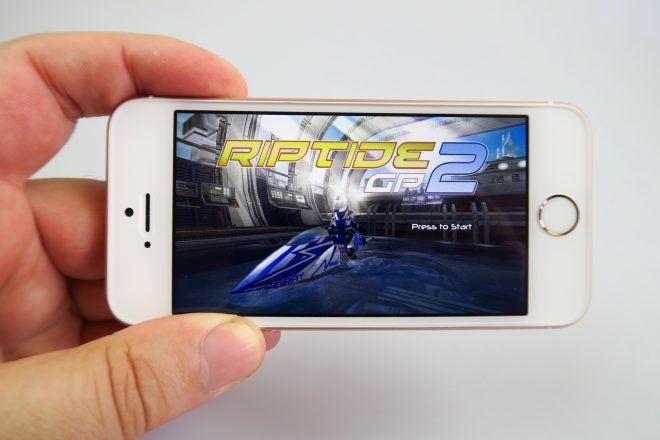 That’s the same CPU, GPU and RAM combo as the iPhone 6S, by the way. Storage is available with 16 or 64 GB versions and there’s obviously no lag, since we have a fluid UI and any game runs perfectly, Riptide GP2 included. We also did benchmarks, worry not and they were simply great. Actually better than great! For example in 3DMark we were very close to scoring first place, in our all time top 10.

In AnTuTu we scored fourth and in GFX we scored first place in two of the sub tests and all of these were achieved also taking into account the Samsung Galaxy S7 and Xiaomi Mi 5 for example, known for their power. Meanwhile, GeekBench 3 brought a first spot score for the single core test. The performance is on par with the iPhone 6S Plus, so that’s a big compliment for a small phone. 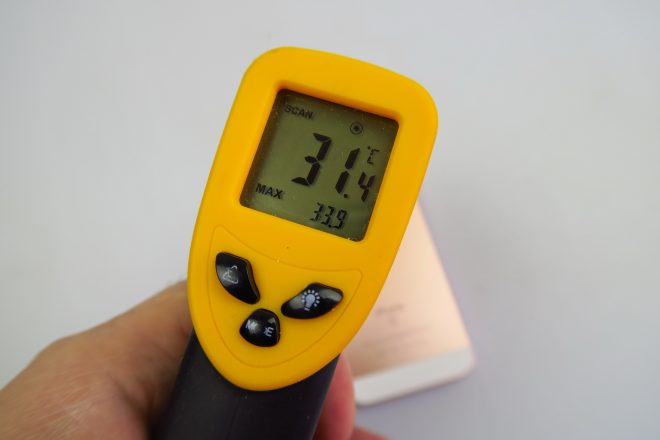 We also tested the temperature of the device, after 15 minutes of playing the game Riptide GP2 and got to 33.9 degrees Celsius, so there’s no overheating here. Then it was time to tune in to some music. Only right grille is associated to a speaker, as you probably know already. We’ve got Apple Music to play with, with the sub sections My Music, For You, New, Radio and Connect.

The experience was crisp, clear, we had good volume and a good bass, as far as the speaker goes. There’s also a nice voice in the mix and good high notes, plus no distortion. In the Settings area we could find the equalizer, with Genre options, Bass Boost and Treble Boost included, plus a volume limit and a Sound Check feature. 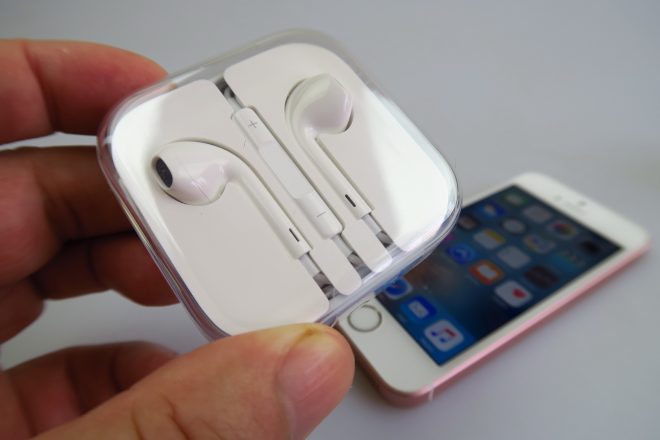 The headphones included here are the EarPods, that are loud and offer a great acoustic experience, with powerful bass and a general pleasant sound. Still, the design is unchanged for many years now. The decibelmeter test revealed a speaker power of 82.9 dBA, which is good, beating the Huawei P8 and OnePlus 2, plus the iPhone 6S and its 81.7 dBA. 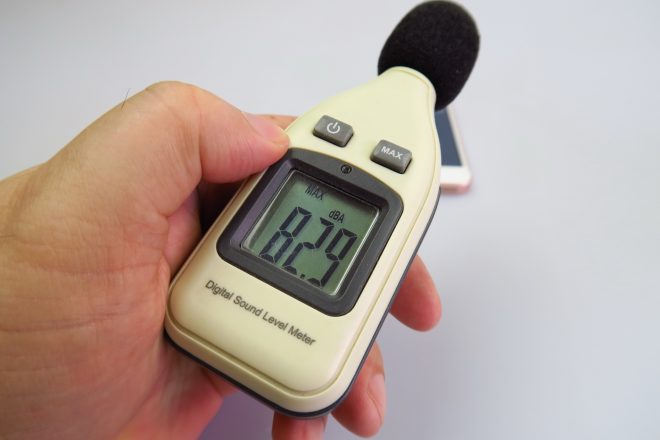 Time for the camera talk! iPhone SE opts for a 12 megapixel iSight shooter with 1.22 micron pixels (Focus Pixels), true tone flash (dual tone), F/2.2 aperture, 5 element lens and a hybrid IR filter. We also get 4K video capture and upfront a 1.2 MP cam borrowed from the iPhone 5s, with the screen lighting up for the “Retina Flash”.

The camera app starts up very fast, but I found the focus not to be that fast. The zoom is fluid and the capture is basically instant, typical for an iPhone. Exposure change also happens very fast, when you need it. Live Photos are available, even though we lack 3D Touch to trigger them and we just see them playing the gallery. 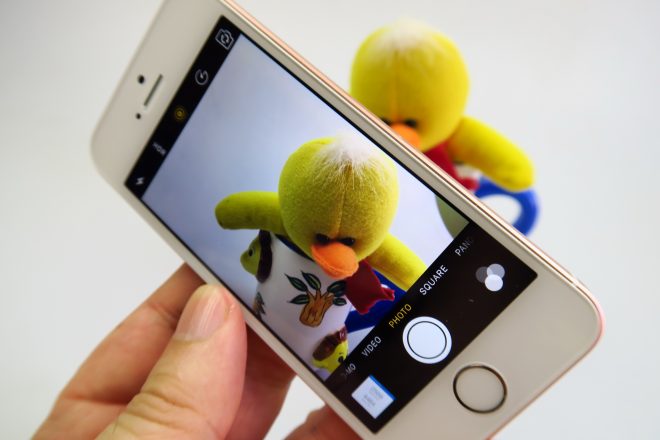 The usual options like flash, timer, HDR, Effects, Panorama and square are included here. Slow Motion is available as a HD 240 FPS capture or Full HD 120 FPS capture. You can film in full HD at either 30 or 60 FPS. Getting to the actual day time shots, we did photo capture on a sunny April day and registered good colors, a crisp image and a nice set of closeups.

Texture looked great and the flower closeups were amazing, plus the focus was rather nice. Selfies also felt OK, being very natural and offering a nice skin color and hair texture. Panorama was superb and had a generous resolution of 16.382 x 3628 pixels. When we zoomed in, we did lose some details, while the HDR was simply great, lighting all the extra dark areas and darkening the ones too bright. 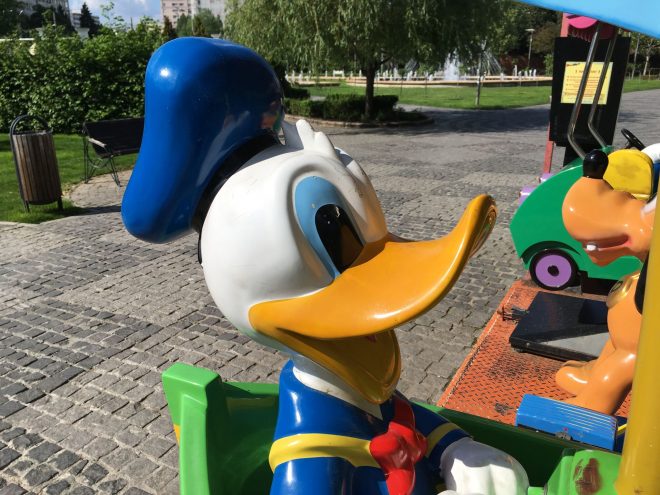 Landscape shots had a lot of detail, even at 12 MP and a zoom in on the PC was enough to have a glimpse at all of them. As usual for Apple for the past 3 or 4 years, in spite of taking over 100 pictures, not even one of them can be considered a total failure, blurred or moved, a trademark of quality. We also did some low light camera tests, with an OK brightness and colors at night, plus light halos that aren’t that big.

There’s no blur, but there are some reflections we weren’t fond of. The closeups looked nice with the flash on (great flash by the way) and the Retina Flash did wonders during the night time selfies. Indoor shots were also pretty good, but the colors could be a bit more realistic. Drawing a line ont his whole chapter, I’d say that the iPhone SE camera is below the quality of the Huawei P9 for example, or the Nexus 6P for example, but not by that much. 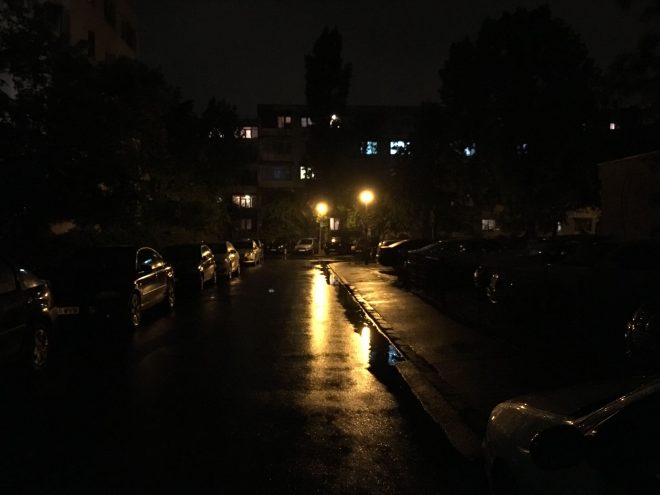 Obviously, we’re on the same page with the iPhone 6S,since the camera is the very same one. Low light capture is clearly below the LG Nexus 5X, just so you know. In spite of all those, the clarity, colors, closeups and selfies are great. Video was shot in MOV format, in Full HD at 30 or 60 FPS, or in 4K at 30 FPS. We had a great exposure change, a fantastic microphone and nice focus and clarity.

The 4K clip reached a bitrate of 50 Mbps and provided great colors, good brightness and focus. When zooming in, the details loss wasn’t very serious, so that’s nice. Digital stabilization was only so-so, not exactly impressive. Video capture in low light conditions was a bit on the dark side, but the colors were OK and in spite of all the tests we did, we didn’t lose focus once.

The microphone on board was once again excellent and the overall feeling was that the quality of the video capture was above the Lenovo Vibe X3 and the midrange Huawei models. Getting into other matters, the Safari web browser was uber fast and had huge scores in benchmarks like Sunspider and Browsermark. On the connectivity front Apple came well prepared, with the likes of LTE, VoLTE, HD Voice, WiFi a/b/g/n/ac, Bluetooth 4.2, NFC, GPS, Glonass, Lightning and Airplay.

The calls were loud and clear and I feel I can’t praise the microphone enough… I actually recorded music and a podcast using it and I was very happy with the quality. Speedtest wielded 26 Mbps in download during my WiFi test and 20 Mbps in upload. The battery is a 1624 mAh unit here, an increase from the 1560 mAh of the iPhone 5s. 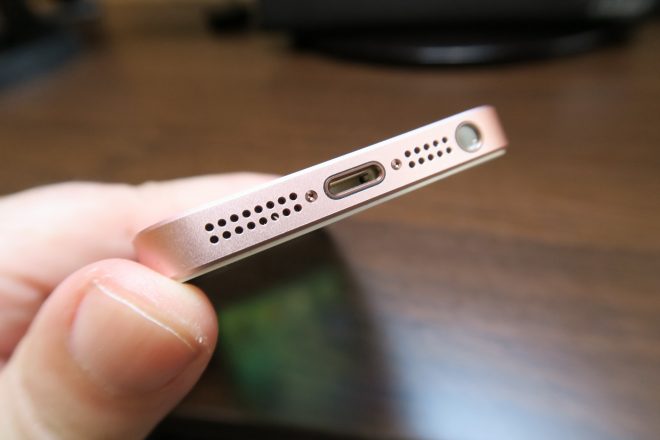 At least it charges faster than the iPhone 6S (2 hours and 35 minutes). Settings for the battery include Low Power Mode, that reduces visual effects, background app refresh and auto downloads. This is a great battery, so there are few things to object about it. When it comes to OS, UI and apps, the iPhone SE brings iOS 9.3, actually iOS 9.3.1 with the latest bug fix and there’s no 3D Touch here, in case you want to know. 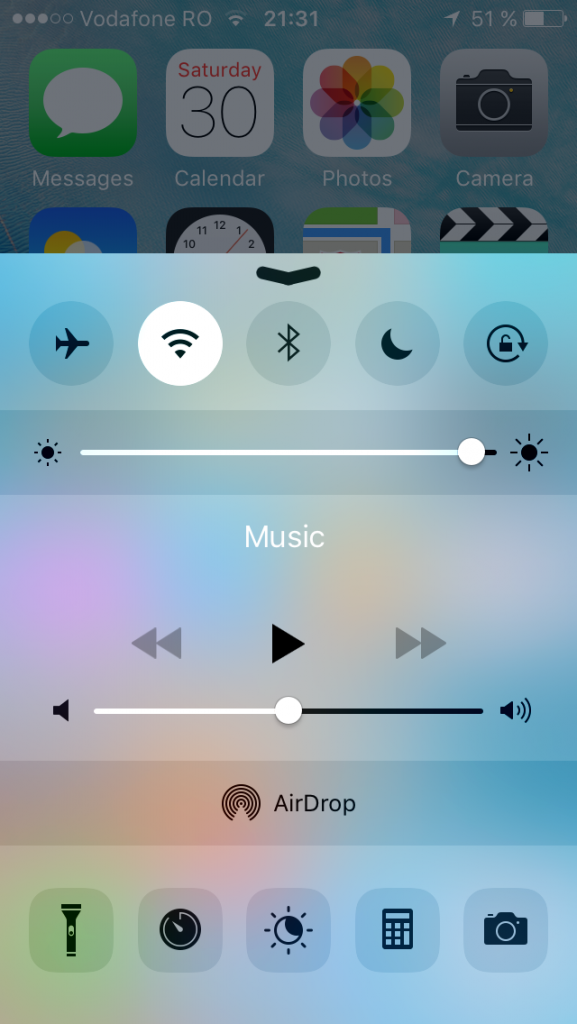 There’s Night Shift here, formatting in the Notes app, plus a ruler, more complex drawing pens and bullets, plus colors. The dropdown bit still holds the Today and widgets, plus the notifications panel. The Control Center is triggered with a swipe up and offers access to Connectivity toggles, media playback shortcuts, brightness slider, AirDrop, Torch, Camera, Calculator, Night Shift.

Multitasking is offered as a horizontal 3D carousel and you swipe up to close apps. Spotlight does math now, conversions too and shows the weather and football scores. Siri can search pictures and videos based on date and place, so that’s great. The fingerprint scanner has a long setup, but Touch ID unlocks the device pretty fast. 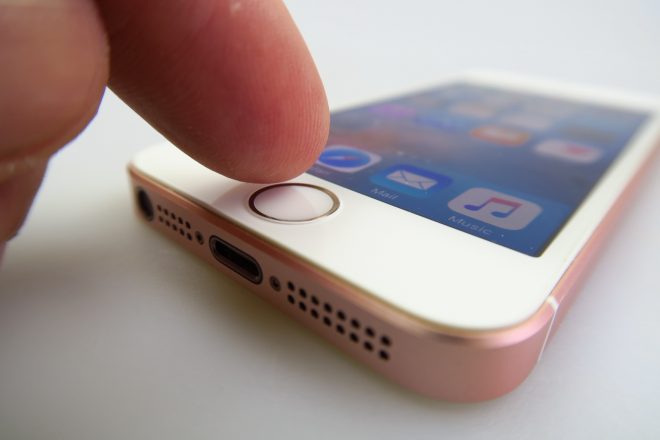 It also lets you pay for stuff in iTunes or the App Sore. We also showed you what the Mail app is all about, with its very cool Markup feature for photo attachments. We counted the preinstalled apps and got to 28 of them, so there’s no bloatware. Now it’s time for the verdict!

Here are the Pros

The iPhone SE has the huge advantage of not having any competition in the sub 5 inch segment, maybe aside from the Xperia Z5 Compact, but even that seems like a big phone compared to this iPhone. It’s basically alone in its own niche and performs much better than all the 4 inch phones you can think of. For anyone who had an iPhone before the times of the iPhone 6 it’s basically a return to a familiar gadget and format.

It lacks major flaws, has a pretty good price and is simply the best small phone one can get in 2016. Its updated price is here.