Blogger Alex Brie recently reported on his website that 40 out of the 50 top iPhone apps in the Books category were created by Vietnamese developer “Thuat Nguyen”. This looks rather suspicious and a hack of the App Store rankings is suspected, as well as some Apple accounts being hacked. 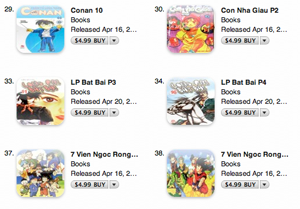 Twitter complaints followed, as well as a MacRumors forum thread detailing the issue and mentioning that a bunch of iTunes users have had their accounts hacked and used to buy apps worth hundreds of dollars. The focus of the hackers were, guess what?… the Vietnamese book apps that reached the top of the rankings recently.

Some folks resorted to cancelling their credit card, till the issue gets solved, while other promised not to use debit cards with iTunes ever again. The thing is that Brie’s post on the suspicious Vietnamese book apps made users come forward, so the hacking may be more spread than we think.