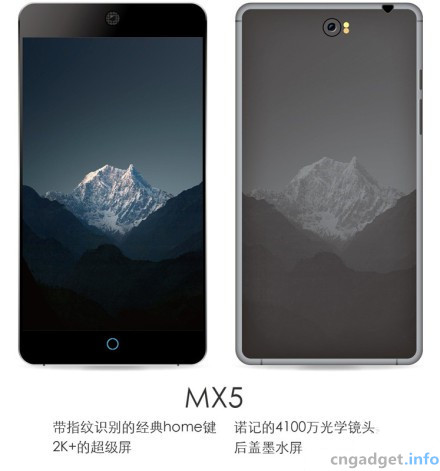 The specs of the Meizu MX5 have leaked and they seem a bit overkill to me… Apparently, the future flagship from Meizu is expected to have a dual display, Snapdragon 810 processor and an incredibly high resolution for the main camera.

Android developer Deelie is the one posting the info on the web, via his microblog. He also posted what he claims to be a leaked photo of the Meizu MX5. While these specs make sense for a future Lumia Pureview phone, they’re surprising for a Meizu. The handset has a 2K display, a Home button with a fingerprint reader and the extra screen is an E Ink one, placed at the back.

Interestingly, Meizu has yet to confirm or deny the statements. The Meizu MX4 Pro has just been launched, following the September debut of the Meizu MX4, so the MX5 is clearly a long way from its debut. In the meantime, we’re more likely to see a Mini or Lite version of the MX4, than the MX5. Still, once can dream and hope, right?