We’re still in Barcelona, bringing you top notch technology updates from editor Zsolt (also reporting for Mobilissimo). Well, it’s LG’s turn to amaze us, through the Optimus 3D smartphone. This is the very first 3D portable device we’ve ever used so we’re kind of nervous. One thing to mention before we start: strangely enough, there’s some eye strain associated with the 3D viewing… Let’s hope it’s just a subjective matter and not a general issue. 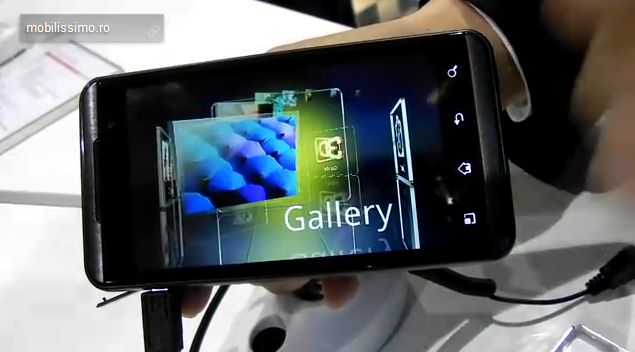 Well, I have to say that the device looks brilliant and so do the 3D graphics. You can switch to and from 2D at any time and we’re very impressed with video playback and the photo gallery, that shows the pics in a circular system. We are also shown two games, Let’s Golf 2 (that caused a bit of eye strain) and Gulliver’s Travels, a very interesting title, that we’d like to play some more, because of its unique interface.

The 3D 5 megapixel cameras are also shown in action, at the back of the device, able to capture anything you like and display it in 3D on your screen. LG Optimus 3D comes with a 4.3 inch display and it manages to cram all that 3D goodness into a 168 gram package. 8GB and 512MB of RAM, plus a  dual core 1GHz CPU complete the package.