Verizon seems to have a very appealing future lineup, made mostly of 4G LTE models, like the Pantech Breakout we’ve just learned about. This model is headed to the Big Red and it has as selling point the latest gen of connectivity, as option. Also, the spec sheet for the handset has leaked online recently and it’s available after the break. 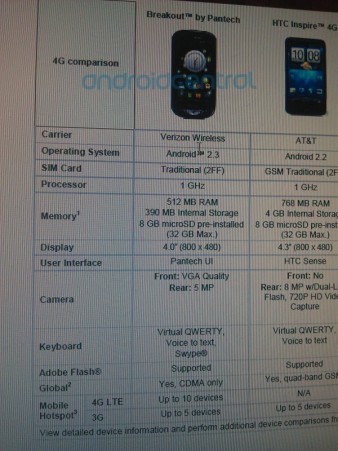 Pantech Breakout comes with a 1GHz CPU, 512MB of RAM and an internal storage of 390MB, that doesn’t impress anyone, but at least you get microSD instead and an 8GB card preinstalled. A 4 inch 480 x 800 pixel touchscreen, 5MP rear camera and secondary VGA front cam are also available. This model runs Android 2.3 Gingerbread.

Truly nothing groundbreaking here… except for maybe the cost of the device, that’s not known yet, although it’ll have to be appealing, to separate this model from similar LTE-based products. Amazon has a pretty hot offer right now with THC Thunderbolt, LG Revolution and Samsung Droid Charge, but is the price right for you ?