Sony will have a busy year in 2012, with tons of new products from the handset market awaiting release. Among them there’s a familiar name or two, like the Sony Pepper, or the Tapioca, plus the long time rumored Nypon. Well, turns out that the entire roadmap for Sony smartphones this year leaked, complete with launch dates and prices. 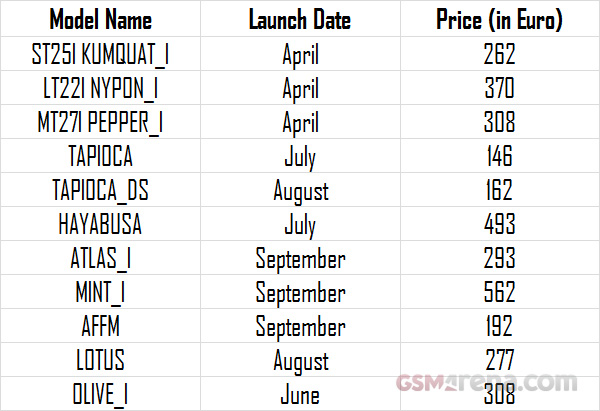 It’s only known that these models run Android and all the other details are mysteries… The only names from this list I’ve heard before are Pepper, Tapioca, Nypon and Kumquat. I’m particularly interested in the Mint model, that will come in September with a price tag of 562 euros. That’s got to be a very potent Xperia smartphone, maybe one with a quad core CPU. It could also be a “cheap” luxury phone, but who knows really? The handsets below 300 euros or even below 200 are probably related to the Xperia mini series, if you ask me.

These are mere codenames, that will be changed till the phones hit the market, so don’t make plans just yet. I expect that at least half of these phones will be present next month at Mobile World Congress 2012, taking place in Barcelona and maybe we’ll get some decent demos out of that. Anyone up for a new Xperia Play phone?