Apple’s main man, Steve Jobs avoided talking about the iPhone 4 antenna issue fix till now, but he must be tired with all the e-mails he’s been receiving, as he started answering them with arrogant one-liners. For starters he recommended the complaining users to hold the iPhone 4 in a different way and now he’s telling us to “stay tuned”. 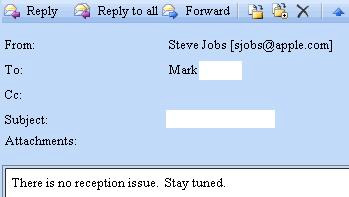 Apparently, we’ll be seeing a firmware-based solution for the problem, soon enough, as Jobs mentioned that “there’s no reception issue”. This mystery claim might mean that it’s a software problem after all, solved by the next iPhone firmware. Experts say that Apple could fix the bug by improving the response time of the baseband and switch to its best available signal.