Android Community has an exclusive user review of the T-Mobile G1, one of the most talked about handsets of the last month. Forum member Kaziko takes a tour of the first device that runs Google Android and provides us with a Q&A session plus a very useful pros and cons list. Remember, we’ll see the G1 hitting the stores on October 22nd. 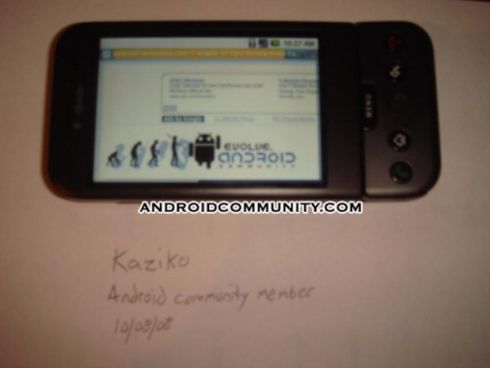 T-Mobile G1 is very similar to the SideKick, as mentioned before, so it will be great for the folks who already own such a handset to get this sort of “upgrade”. The first Android smartphone has great speakers and audio quality, specially when compared to other HTC devices. G1 supports IM clients like Google Talk, AIM, ICQ and MSN, becoming the perfect portable device for texting fans.

Rest assured that this is not a perfect handset, as it has quite a lag when handling apps, which tend to “stutter” according to Kaziko, so you’ll have to restart the phone at some point in order for it to run smoothly. On the “pros” side we find that the slide out keyboard is great comparing to other top handsets, while the Android Market can easily rival iPhone’s App Store.

Passing to the “cons”, the G1 has a memory leak that requires it to be restarted in order to work, plus the battery charger makes the bottom side of the phone very hot and there’s no virtual QWERTY keyboard to show on the screen. Add a limited video playback to that and no folder system (like on other HTC devices) and you’ll see that not everything is sunshine in Android’s land…