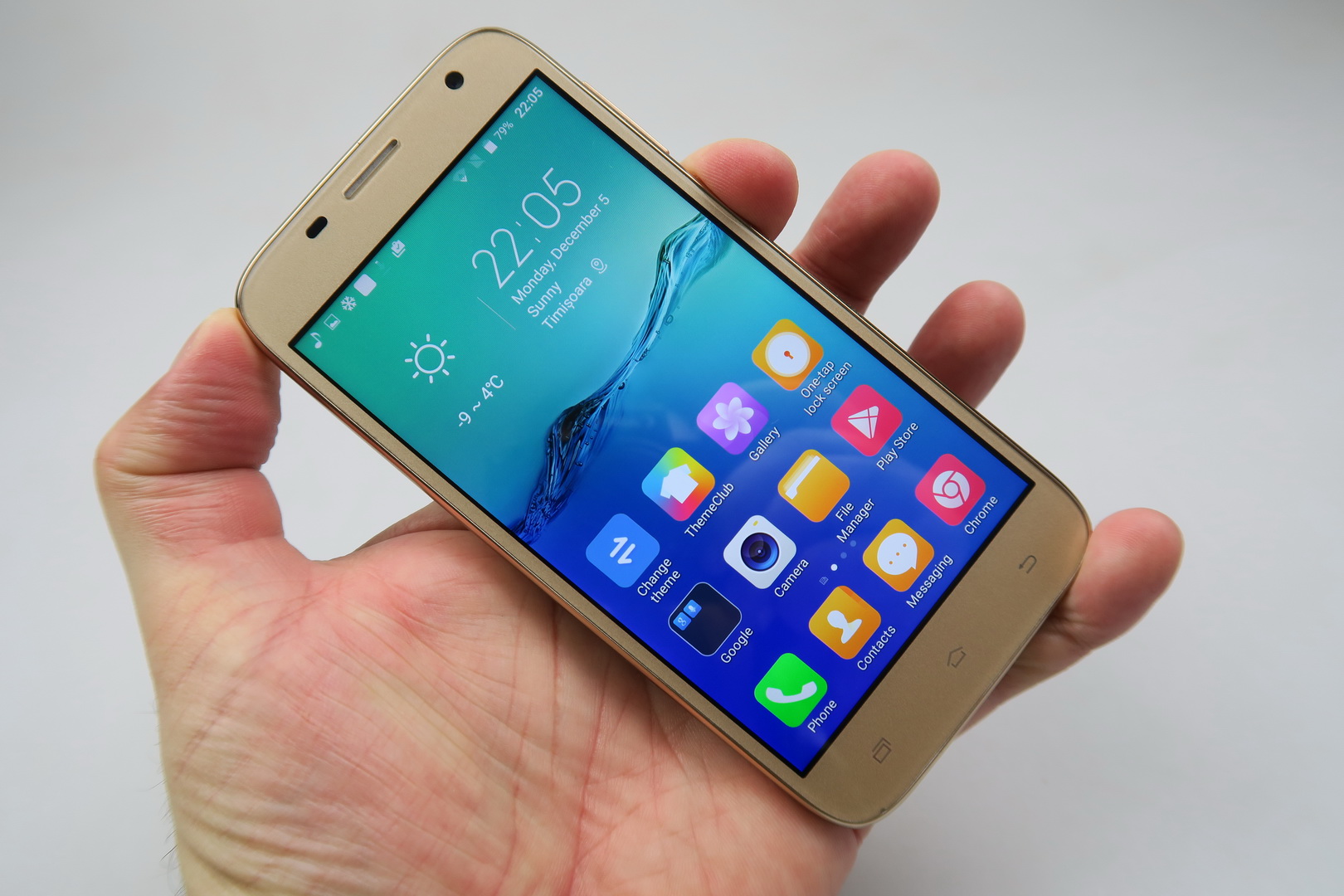 It’s not every day that we test a sub $100 phone, so we’re very interested to see how such a device is doing. Case in point today the Uhans A101s, that gets reviewed below. This is a 5 incher, that we tested in the 3G Version, priced at $67, but there’s also a version out there with 4G, at $65. We’re dealing with a quad core low midranger, almost an entry level handset. 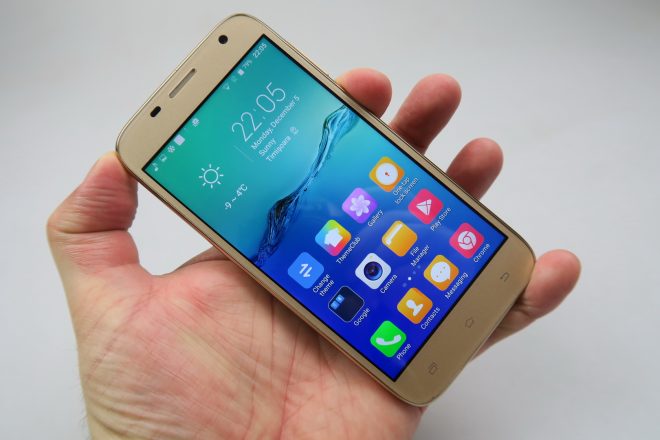 The 3G unit is available in gray, golden or pink, while the 4G one comes in black or white. I can imagine the Uhans A101s being a Galaxy J5 rival or Galaxy J3 rather. The design involves a 2.5D glass panel and a polycarbonate body, with an incredibly frustrating to remove back cover. The phone is a 5 incher, with a 9.5 mm thick body and a 118 gram weight.

Meanwhile, the Galaxy J3 (2016) measures 7.9 mm in thickness and weighs 138 grams, so this device is quite lighter but also thicker. Uhans A101s is also 5 grams heavier than the iPhone SE, so that’s also a compliment. It’s got OK grip and build and solid one hand usage. The frame does have some metal to make the machine sturdy, at least. Some nice curves can be spotted here and otherwise this is a generic device, as far as looks go. 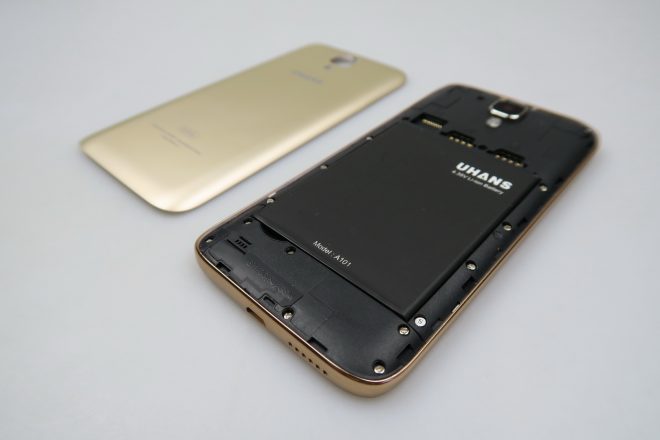 I should also mention there’s a removable battery and below the cover there are two SIM slots and microSD card slot. Moving on to the display, we get a 5 inch IPS LCD panel here with a 1280 x 720 pixel resolution. There’s a 2.5D panel, big bezels and the video player of choice comes with Pop Up Play functionality. The viewing experience involves OK brightness, a so-so contrast, washed out colors and wide view angles. There’s very much white hue in this screen and the pixels have an RGB Stripes setup.

The luxmeter test revealed a value of 350 LUX, which is good enough for the price. It’s the equal of the LG AKA and surpasses the LG G3 and Huawei Honor 7, but scores below the Huawei Nova and Lenovo K6. Settings include the likes of Miravision, with Picture Modes like Standard, Vivid and User Mode. User Mode offers options like Contrast, Saturation, Brightness, Sharpness, Color Temperature, Dynamic Contrast and Brightness Level. 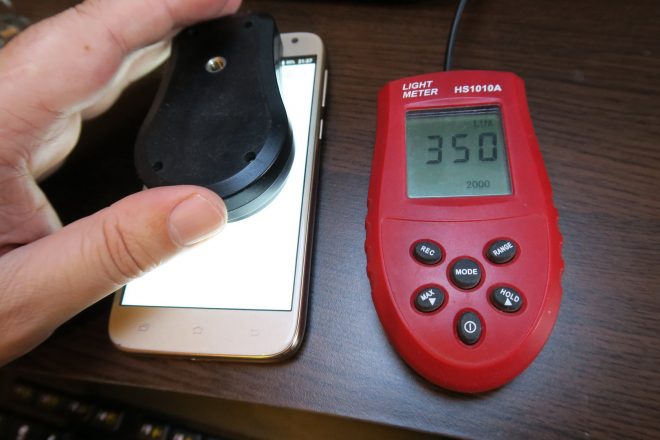 There’s Adaptive Brightness too, font size and overall this is a good screen, especially for the price. Moving on to other hardware, there’s a quad core MediaTek MT6580 processor here, clocked at 1.3 GHz. It’s a 32 bit unit, with ARM Cortex A53 cores, Mali 400 GPU and 2 GB of RAM. Then we get 16 GB of storage, a microSD card slot and in general we didn’t meet with any lag, but apps did take a lot of time to start up.

Games like Riptide GP Renegade run decently, but a trace and hint of lag was present, though. We also performed some benchmarks and in Quadrant we surpassed the Huawei Honor 4X, but also scored below the old, oh so old HTC One Mini. In AnTuTU 6 we were on par with the ASUS ZenFone Max and below the iHunt Freedom. At least we beat the Orange Dive 71. 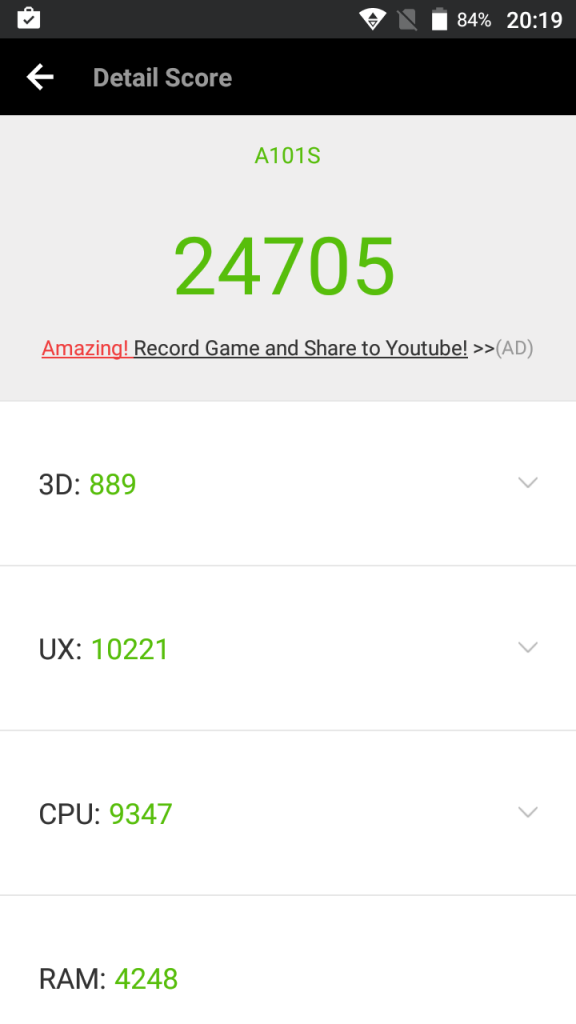 In 3DMark Ice Storm Unlimited we were among the bottom 13 models, so the graphical abilities aren’t very mint here. It’s no race horse, that’s for sure. We also did a temperature test and achieved 35.7 degrees Celsius after running GFXBench and 41.9 degrees after running Riptide GP Renegade, so there’s a bit of overheating here. Time to see how the battery does!

We get a Li-Ion 2450 mAh battery and 5V/1A charge support. The video playback time achieved is a mere 4 hours and 19 minutes, which is very poor, no matter how much you paid for the handset. It’s placed on the 135th spot from all the smartphones I’ve ever tested, which is of course a letdown. We went past the LG G Flex 2 and iHunt Freedom, but also scored below the Mstar S700 and Uhans S1.

In PCMark we got to 5 hours and 15 minutes, which is almost OK at this level, especially since we beat the LeTV 1S and Huawei P8 Lite, but scored below the Coolpad Modena and Xperia E4. Charging is done in 2 hours and 23 minutes, which is pretty long, but at least superior to the HTC One M8. Settings for the battery are the typical Standby Intelligent Power Saving, Battery Saver, Doze and overall I’d say this battery is mediocre truly.

Now we move on to acoustics, where we get a speaker at the bottom. The music player features a custom UI, but also a stock EQ, with genre presets. There are 5 custom channels here, bass boost, surround sound, preset reverb and sleep mode. We didn’t get any headphones for this model, so we only tested the speaker. The listening experience involved loud volume, but also a broken sound and that feeling that an old radio gives. 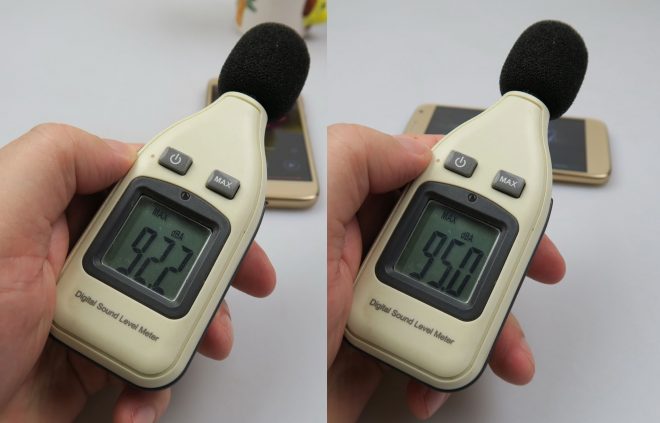 The lack of bass is also a problem, but we also didn’t get any distortion luckily. There’s also no big muffle and the high notes are well rendered. The decibelmeter test we did revealed a value of 92.2 dBA at the front and back when using the standard test audio sample. Meanwhile, when gaming we reached 95 dBA, which is a very high value.

It’s actually a top 3 value and we scored below the BlackBerry Passport and above the Galaxy S6, iPhone 7 and other high end units. Settings include Sound Enhance, BES Audio Enhance and BES Loudness, as well as BES Surround. The audio is good overall and that broken sound is slightly fixed via the EQ. Now it’s time to address the cameras! 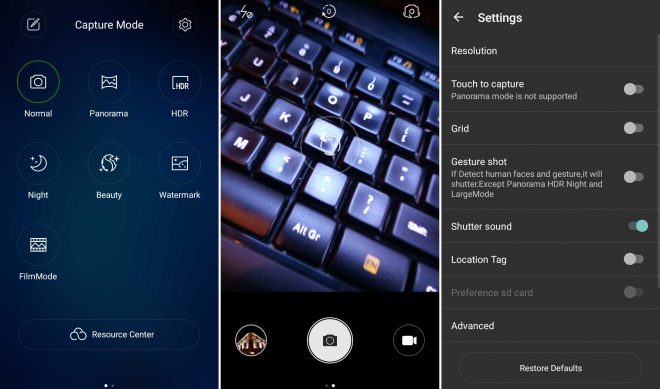 There’s no exposure, ISO, white balance or shutter options here, so only the basic package. The gallery of shots we’ve taken with this phone was done in early December 2016 and the pictures are washed out, there’s also background blur and the closeups were rather OK, though. There’s not a lot of details available, but the brightness was pretty reasonable. 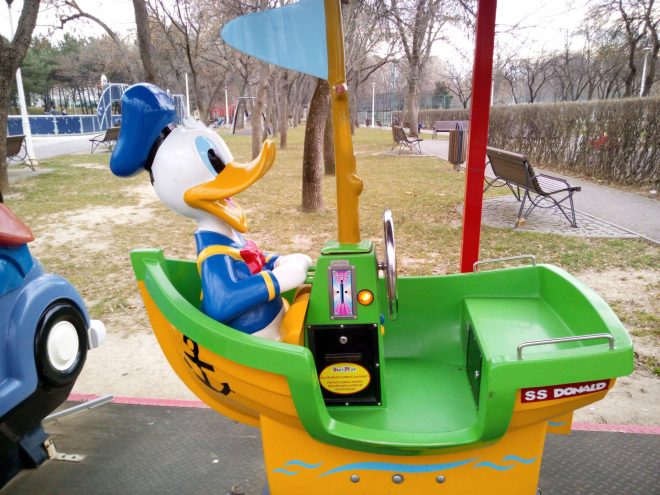 Panorama was modest, with a resolution of 560 x 5632 pixels and it was rather clear. In general I felt that the pictures had a good color calibration, particularly the ones taken in full light. Texture of objects was well captured and when the focus is proper, there’s no blur. Focusing on closeups was pretty K and the HDR was able to correct the strange green hue of grass.

Landscape shots had poor details, as expected. You can totally forget about selfies, that are quite blurry and foggy. Zooming into those ducks was good and one thing you should never do with this Uhans is take moving shots. In the end the camera is not memorable, even though it takes some good shots here and there. It reminded me of the first gen Moto G, although that’s not much of a compliment, since it’s an old and modestly specced device. 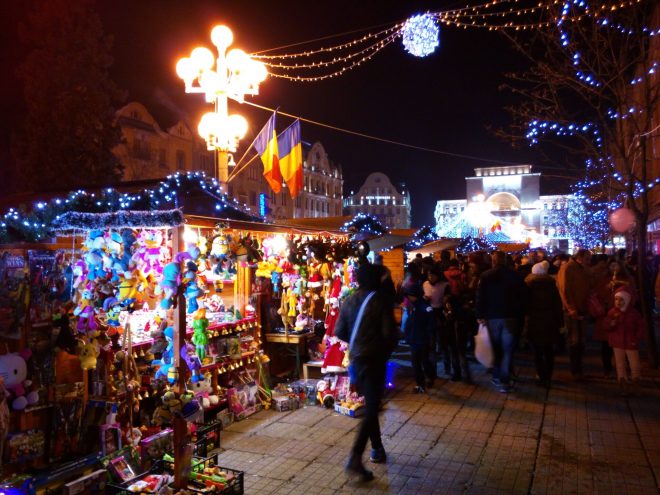 Low light pictures were very blurry and foggy, but had OK-ish colors. The flash has little power and also has little effect on the pics. Street light halos were big and there was a bit of ghosting going on every now and then. The brightness was decent, but in the end night time pictures are nothing to write home about. Then we get to filming, in 3GPP, Full HD resolution and 30 FPS.

The bitrate was a pretty good 24 Mbps. There was a lot of refocusing, flicker and once again we had well calibrated colors, possibly the most constant attribute of the camera. Exposure wasn’t bad, the clarity was reasonable for the price and too bad for the refocus, otherwise it’s a passable experience. The microphone is also rather weak and zoom quality was poor, so in the end nothing truly special, but also nothing fundamentally wrong.

Low light video shooting was done at 16 FPS, 18 Mbps, with a violet hue and shaky camera, but also OK clarity and big street light halos. Focus loss was also a problem… again. I find that this camera should be better, especially for my expectations and even for a sub $100 price. Moving away from the camera, we tested the web browser, in this case Chrome, that has a so-so loading speed, also confirmed by its benchmarks.

We also tested the virtual keyboard, a stock one in this case and proceeded to analyze the connectivity. This is a dual SIM phone with dual standby, using micro SIM card slots. There’s a microUSB port on board, 3G connectivity tops, WiFi 802.11 b/g/n, Bluetooth 4.0, GPS and the calls have OK clarity, mid level volume and OK signal. There’s a not so good noise cancelling and the SpeedTest we did revealed a download speed of 8.3 Mbps via 3G and 4.4 Mbps in upload speed. The WiFi testing revealed a value of 47 Mbps in download and 25 Mbps in upload, which are just OK results, no record being set here. 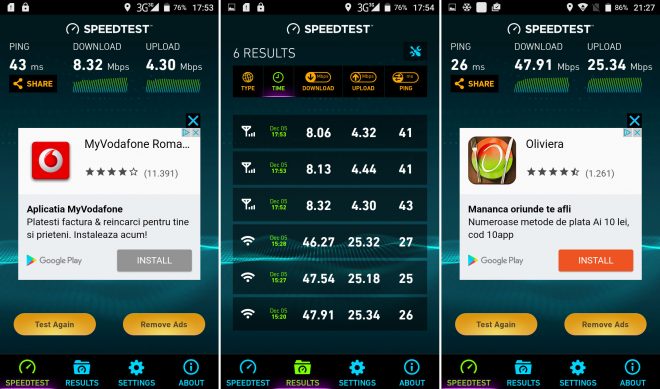 Time to discuss the software! It’s Android 6.0 Marshmallow with a custom UI, with childish icons, minimal and basic colors. The dropdown portion includes notifications and quick settings, including an option to record the screen. Keeping the homescreen pressed reveals the plugin area, which are basically widgets, plus themes (with a store) and exclusive space, that’s basically a big widget. 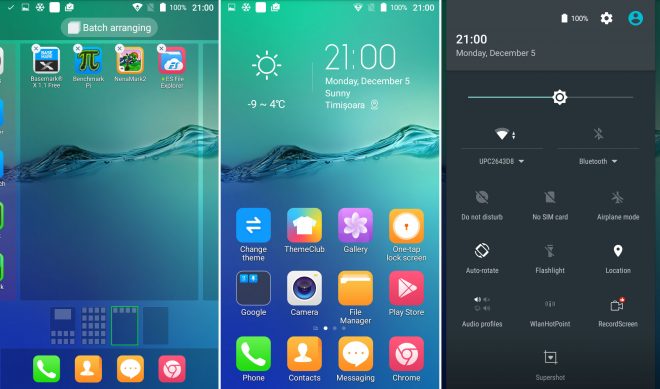 We can tweak the wallpaper, a function called Magic Finger (basically a cursor), transitions, icon arrangements, layout, icons and gestures. One of the homescreen features search windows using services like Yahoo, Amazon, Google and Facebook. Setting have a Smart Settings feature with gestures included and the preinstalled apps list has 29 names, which is not exactly huge, so that’s OK.

Among the apps we find a Theme Club, Security Center and the apps get uninstalled like on iOS, by pressing an X on them. Lots of uninstallable apps are here, so that’s a plus. I regret the lack of a fingerprint scanner, which should be present on a modern phone. And now let’s see the verdict! 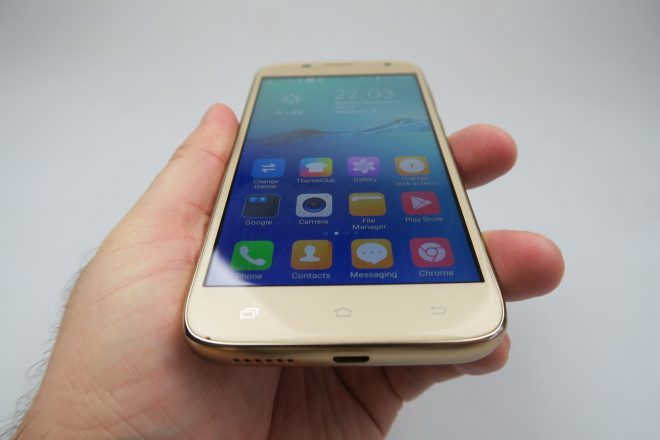 Uhans A101s is a mediocre phone in most areas, minus the acoustics and volume, where it excels. There are too many compromises made in order to reach such a low price. We get only 3G, a modest camera, reasonable performance and a mixed battery, with too little video playback time. Honestly I’d save the $67, add another $30 and score a 4 GB RAM phone with a better camera.

Those with $60 or more to spare should maybe get the 4G version of this phone, if they really want it, the Uhans A101. And here’s where you can buy the device: