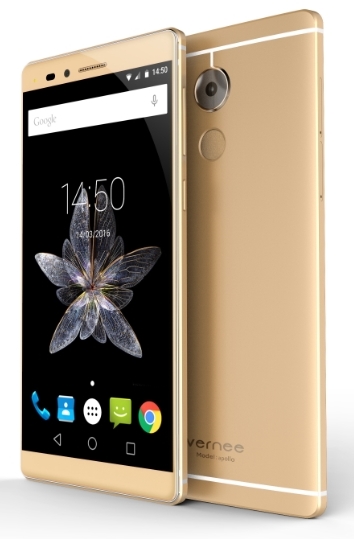 We already stepped into 2016 for 3 months now, and it seems that we have a great year when it comes to smartphone devices. Vivo Xplay 5 is one of these devices just launched, smartphone that comes with a whooping 6 GB of RAM memory along side other high-end specs. As expected, there’s some other Chinese brands that are currently working on similar phones at the moment.

Today we get to know about a new Chinese company called Vernee, producer that will enter on the smartphone market starting late April – moment when its first device called Apollo, will be available for buying. As you could guess already, we’re dealing with a phone that brings 6 GB RAM memory as well.

Next we have a deca-core MediaTek Helio X20 processor here, a 5.5-inch Quad HD display (2560 x 1440 pixels), and 128 GB space of internal storage that probably can be expanded later using a microSD. There’s a 21-megapixel rear camera with Sony IMX230 sensor and a 8-megapixel front-facing camera that sounds interesting for selfie captures.

We’ll get an USB Type-C and the 3D Touch technology that is starting to pop up on more Android smartphones lately. As you might tell from the picture above, this phone arrives in a metallic body, phone with a design that resembles a lot to the Huawei Mate 8.

This isn’t a bad thing overall, and if the price will be as great as the specs, then Vernee Apollo might conquer the Chinese market in the following months.