How about an iPhone for Goliat? How about turning the famous Apple handset into a huge coffee tablet like the Microsoft Surface? And how about getting it pictured in the following images? This is the creation of Benjamin Bachmeier, who though it would be nice to have a 40 inch iHandset in the living room…. 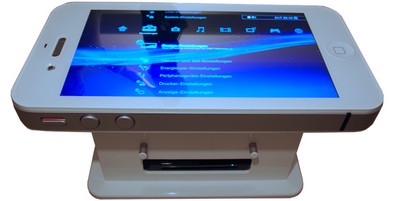 This device can be used as PC, iPad, television set and mobile phone, all of them pretty cool things to do with a single gadget. As far as hardware details go, you get 4GB of DDR2 memory, 500GB of HDD, a 5.7 megapixel camera with 720p video recording and Win 7 and Mac compatibility There’s also a gigantic Home button installed and a HD Toshiba LED for display. 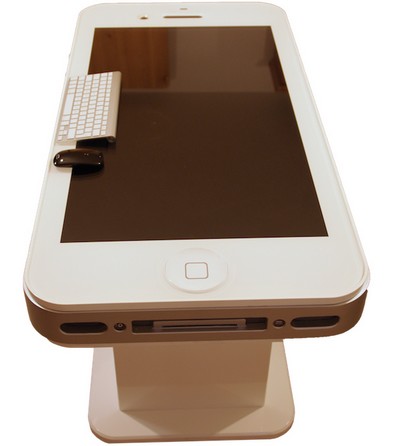 The sound is enabled through a 4.1 channel system and there’s even a DVD player in the mix, for all of you who haven’t gone Blu-ray yet. The brain of this gizmo is a 2GHz processor and the specs list is complete by SATA/Ethernet and all the normal PC ports one can dream of. The name of this product is iTableous and I doubt that Benjamin Bachmeier will want to sell this piece of work, although for a good price anything can happen….

There’s even a dock connector at the bottom… that’s how detailed the device is! More details in this vid: