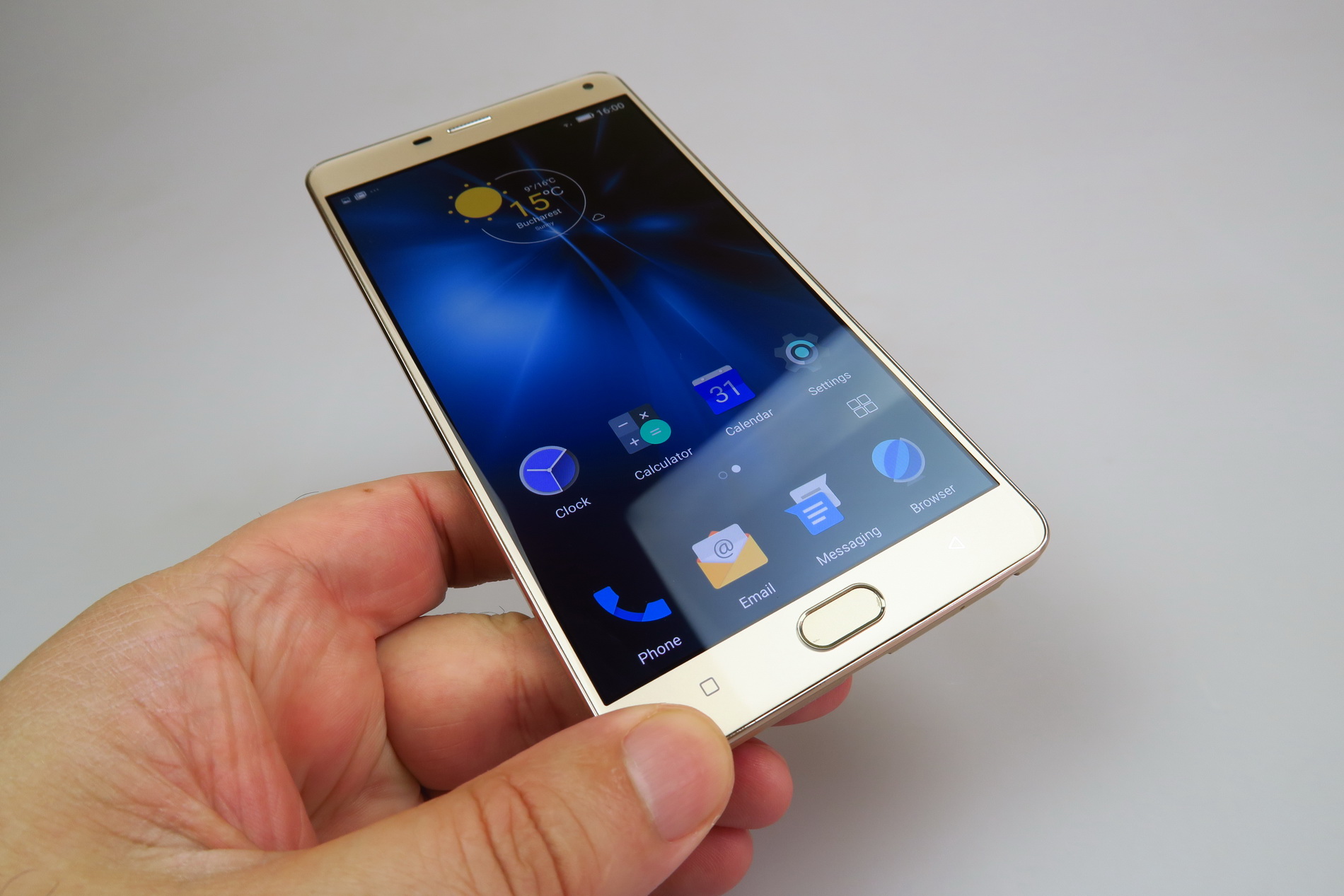 We tested the full trio of Allview P8 Energy models, that includes the P8 Energy, P8 Energy Mini and now the P8 Energy Pro. They’re East European, locally integrated versions of the Gionee Marathon 5 models and the one detailed below is the Marathon M5 Plus. The device debuted in December 2015 and it’s priced at around $400. 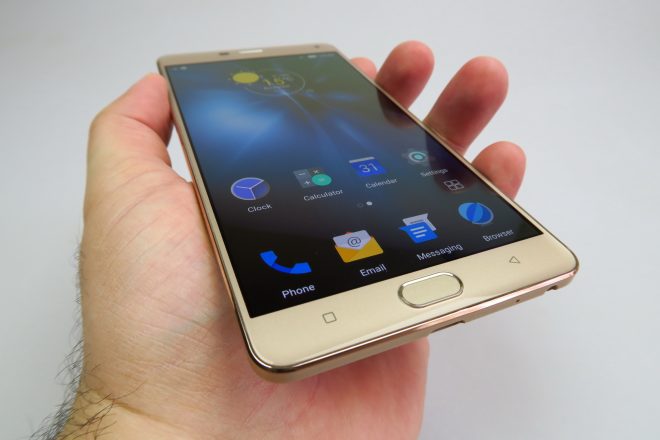 The Allview version of the phone was showcased at MWC 2016 and in Romania it’s offered with a local VR headset known as Visual VR. The design involves a metal frame, plastic back, 2.5D glass panel upfront with a 6 inch diagonal. Available in gold or silver, the smartphone measures 8.4 mm in thickness, which is not bad for a 6 incher, especially for such a big battery inside.

The weight is 209.8 grams, which is actually lighter than the P8 Energy and its 212 grams. There’s a top and bottom plastic window on this model and the center of the back also feels like plastic, although it should be made of metal. Allview P8 Energy Pro/Gionee Marathon M5 Plus has a sturdy frame, rounded back and corners and overall a nicer design than the P8 Energy. 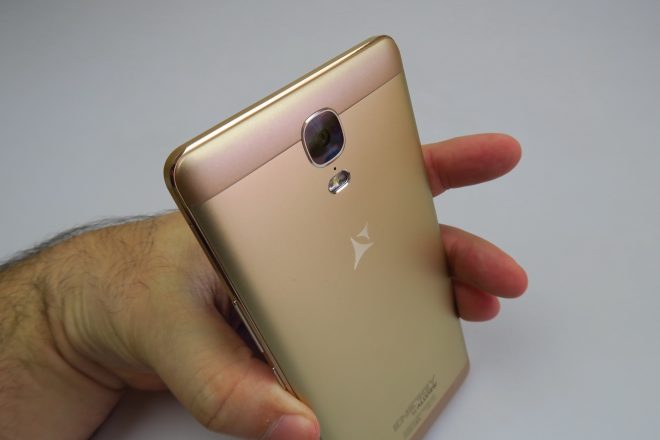 Grip is good and surprisingly the device doesn’t feel very heavy. It’s a comfy and elegant model, with good feedback from its buttons. The display included here is a 6 inch On Cell Touch unit with Full HD resolution, an AMOLED panel and Gorilla Glass 3 protection. 367 ppi density is here and we get a 2.5D panel. The video player we used had DTS acoustics and a Pop Up Play feature.

The visual experience brought us very vivid colors, good brightness, wide view angles and deep blacks. Pixels are of the Pentile Matrix variety and then we used the luxmeter to measure the screen brightness and got up to 535 LUX, which is great. It beats the P8’s 471 LUX, P8 Energy Mini’s 274 LUX, as well as the Nexus 6P and Huawei P9. I also noticed there’s a 60 LUX difference between the top and bottom of the screen. 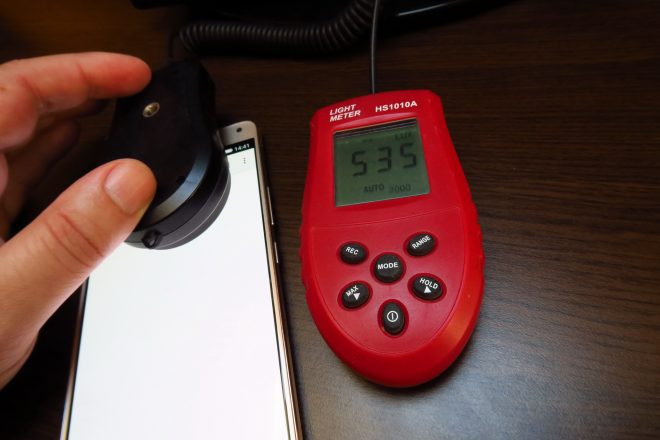 Settings for the screen involve brightness, adaptive brightness, economical backlight, font, LCD Effect (neutral, cool color, warm color) and skylight. Overall it’s a good screen and I don’t have many objections. As far as hardware goes, the smartphone packs an octa core CPU, the MediaTek MT753, clocked at 1.3 GHz. There’s also the Mali T720 GPU in the mix, 3 GB of RAM and 64 GB of storage.

The handset has a microSD card slot, with support for up to 128 GB and we actually measured the performance of the device and found it has no lag, comes with a fluid UI and the apps start up fast. It runs games OK, without any trace of problem. In benchmarks we were close to the Galaxy S5 in Quadrant and near the HTC One A9, while in AnTuTu 6 we beat the Galaxy A3 and Galaxy A7 (2016), which is not bad at all. 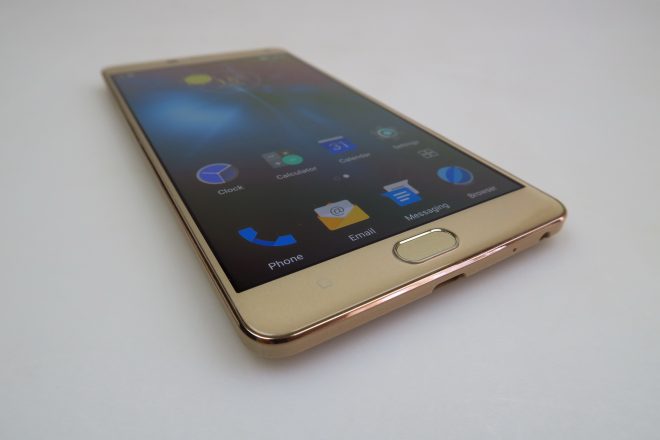 In GeekBench 3, in the multi core test we were on the level of the HTC One M8. The 3D scores in the likes of GFXBench were kind of low. We also did temperature tests and scored 35.3 degrees Celsius after playing the game Riptide GP2 for 15 minutes and got to 33.5 degrees after running the benchmark GFXBench, so there’s no overheating. 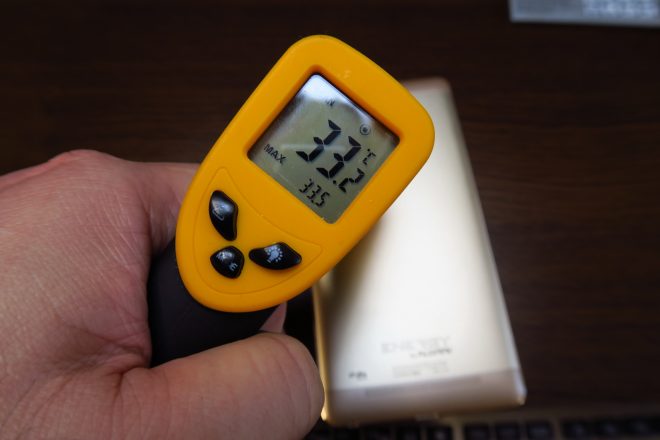 Moving on to acoustics, there’s DTS sound tech and we can use a player called Music and there’s also Google Play Music. The app offers the option called “Volume Strengthen”, for an extra boost and there’s also a custom equalizer for headphones, with genre settings and 5 custom channels. The listening experience involved a loud sound, good clarity and especially a good guitar. 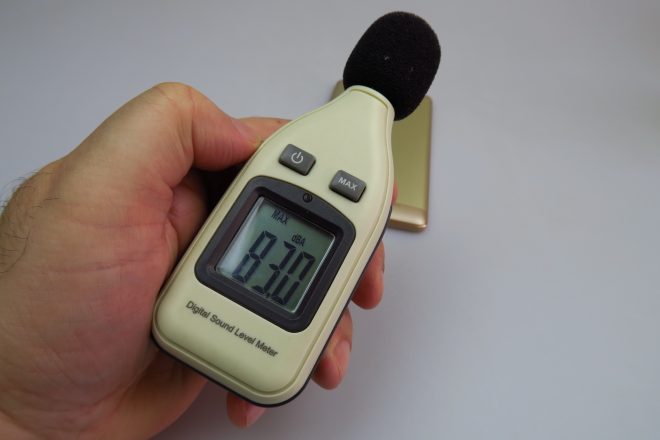 There’s no distortion, but I felt that the speaker needed more bass. It’s also muffled on a flat surface, but only a bit. We used a decibelmeter to test the speaker and got up to 80.7 dBA at the front and 83 dBA at the back, which is OK. It’s still below the Allview P8 Energy Mini, with its 83.6 dBA. It’s still a bit over Allview P8 Energy’s 82.6 dBA.

Headphones bundled with the phone are comfy, offer good isolation, they’re loud, but I’ve heard louder. The wire tends to tangle and we’ve got a one button remote. Now let’s discuss the camera! 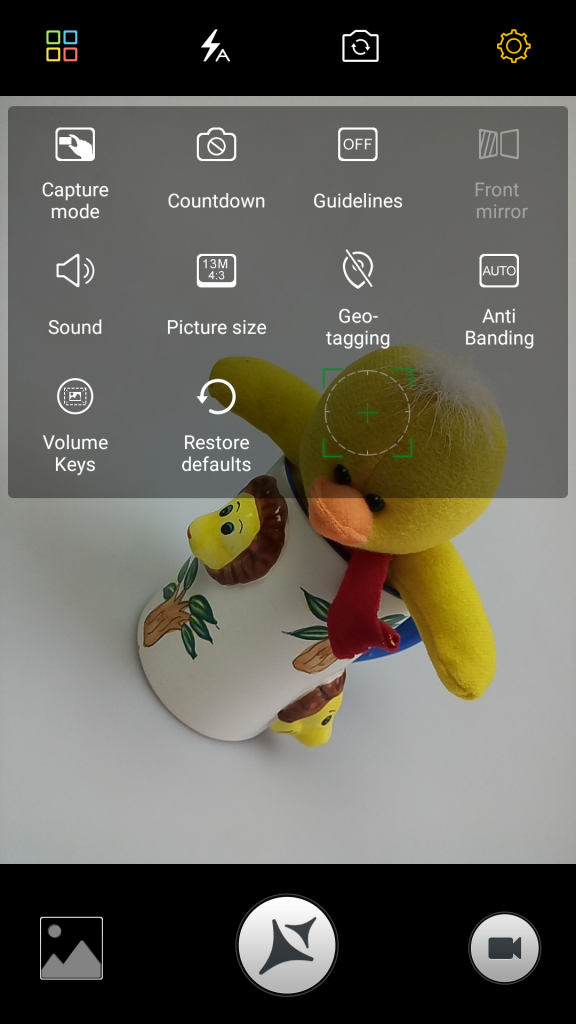 We’re dealing with a 13 megapixel main cam, with big LED flash, F/2.0 aperture, PDAF, 5 lenses and sapphire protection. The front camera has a 5 MP resolution. The camera app starts up fast, but the focus is slow, while the exposure change felt extreme most of the time. Picture taking speed was so-so and you have to wait a bit till the shot is ready. The 4X zoom is fast. 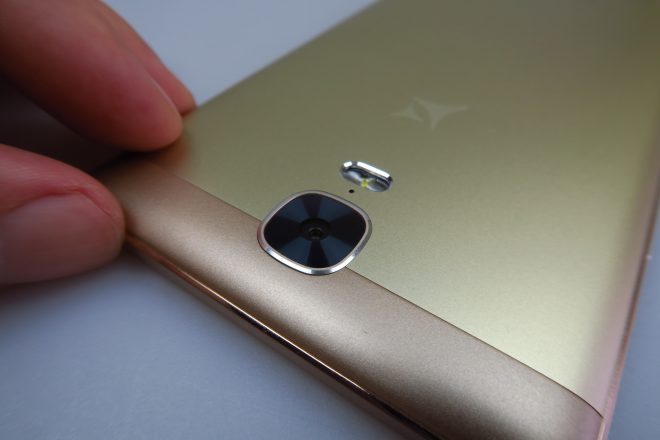 Video capture options include microphone, exposure, anti shake the video capture goes to full HD tops. When it comes to the gallery, we have a set of day time shots, where we noticed that the camera doesn’t focus perfectly, at least indoors. There’s a slight lack of clarity in food closeups, but outdoor the clarity was OK. Selfie is a bit washed out and panorama was underwhelming, with a resolution of 6832 x 1840 pixels.

Exposure was also pretty strange in that case. Closeups and focus play were fine and some of the shots felt a bit too white and overexposed for our taste. Zoom quality was good and colors were pretty well calibrated. Details in landscape shots were no trouble at all and I liked the texture of flowers we sot. It’s pretty much the same experience as the one of the Allview P8 Energy, with some exposure problems. 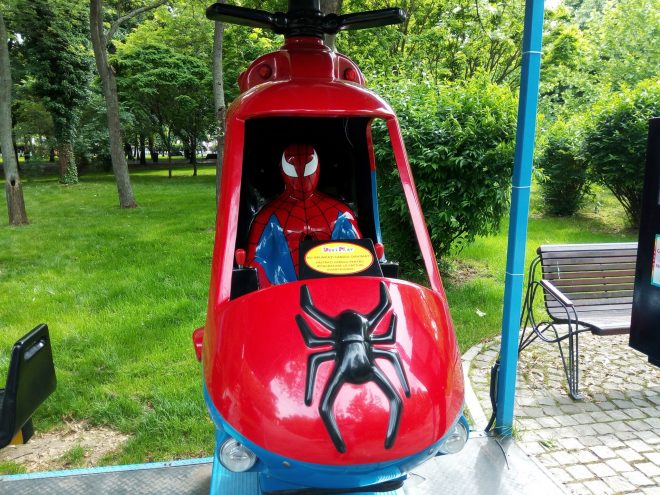 Clarity is on par with the HTC One M8 let’s say, minus the cool features. Super Photo mode offers a huge resolution and a ton of details. Low light photo capture  featured OK colors, with flash and those shots felt like they were taken in two phases: first to shoot and second to arrange brightness. The Night Mode delivered good capture and one thing to remember here is that you really have to be patient to focus before moving the device. 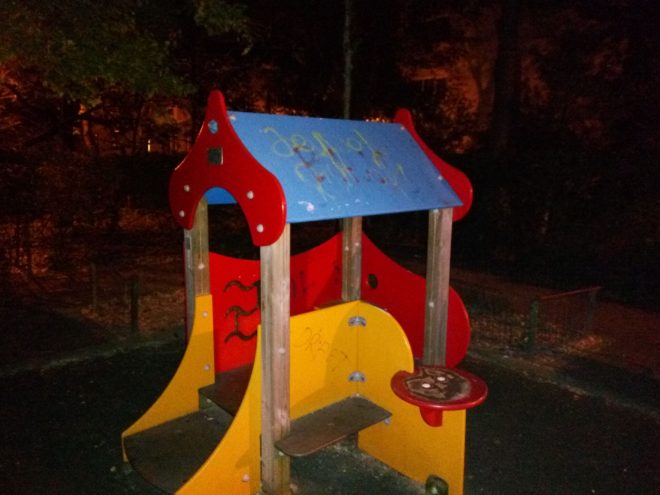 You also have to wait a bit extra till the shot is done. Closeups looked nice and we did have some blurred shots, but it was night in the end, so they were OK. Video capture happened in MP4 format, at 25 FPS and with 14 Mbps bitrate. The resolution was Full HD and night time frame rate dropped to 16 FPS. Digital stabilization was modest, unimpressive and the water shown in video captures felt rendered, rather than realistic. The microphone was OK, faced the wind pretty fine and we had some sudden exposure changes.

When zooming in, the detail loss was major, but at least the colors were OK. It’s an average camera when it comes to filming and at night things go downhill fast, as everything moves in frames. So, totally underwhelming. The web browser on the phone offers a slow page loading experience and the browser benchmarks were also rather underwhelming.

A comfy stock keyboard was also present. As far as connectivity goes, there’s 4G LTE here with FDD and TDD support and going up to 150 Mbps in download speed. This is a dual SIM smartphone, with micro SIM card slots, USB Type C port, Bluetooth 4.0 support and WiFi b/g/n. Allview P8 Energy Pro supports WiFi Direct, USB OTG (cable bundled) and the calls are loud and clear, while the mic is good. 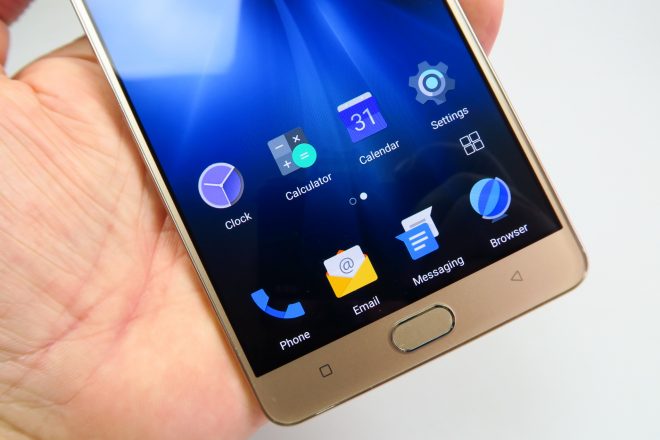 We got good sound isolation, a speed dial feature and black list function. The handset’s core feature is a 5020 mAh Li-Po battery, that on paper provides 2 days of heavy use or 3 days of light use. The bundled charger is a 9V/2A unit and we also promised 1350 minutes of talk time on paper. I should also mention that this phone works as a power bank, juicing up other phones and tablets.

We tested the video playback in a loop and got up to 16 hours and 41 minutes, which is a great result. It’s still below the P8 Energy, ASUS ZenFone Max and Lumia 1520. In PCMark we got a huge 11 hours and 21 minutes, below the ASUS ZenFone Max, P8 Energy and P6 Energy. Charging is done in a hugely impressive 1 hour and 53 minutes, which is fantastic for a battery phone. The other P8 energy units charged in around 3 hours. 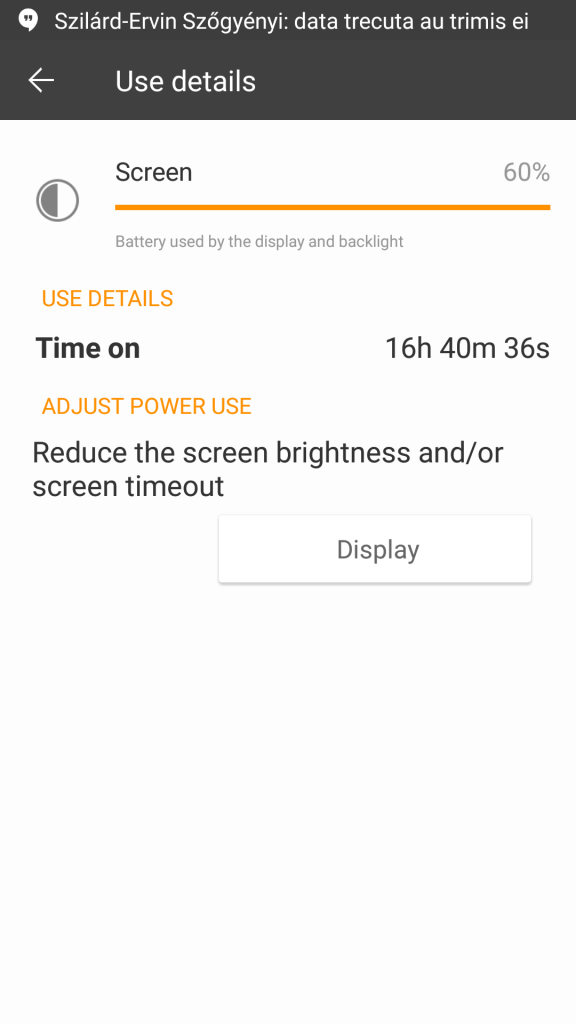 The P8 Energy Pro runs Android 5.1 Lollipop, in pretty much a stock version, with some tweaks. The lockscreen features a series of promo wallpapers, leading to promo pages for Allview products. The homescreen when pressed reveals widgets (3D widgets some of them), apps and effects. Multitasking is done via carousel and the dropdown bit includes notifications. 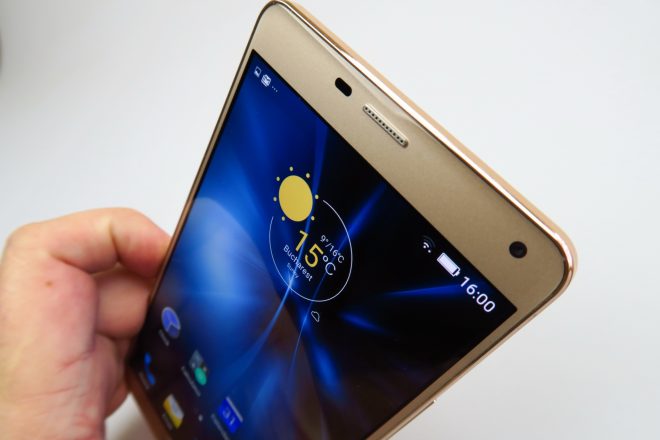 If you swipe up you will trigger the Quick Settings area and shortcuts for functions like Super Screenshots, Torch, Fake Call, Camera and more. There’s also a brightness slider there. Settings involve security, guest mode and fingerprint scanner, that has a slow setup, but unlocks the device pretty fast. Screen pinning is possible and we also get smart gestures, like smart dial, drawing patterns and double tap to wake.

Then there’s Suspend button and LED light, as well. The Gallery app has a trash section and the preinstalled apps list includes 46 names, so that’s on the bloatware side of things. Among the apps we find Bitdefender, Chameleon, Child Mode, Notes and System Manager. And now we’re off to the verdict! 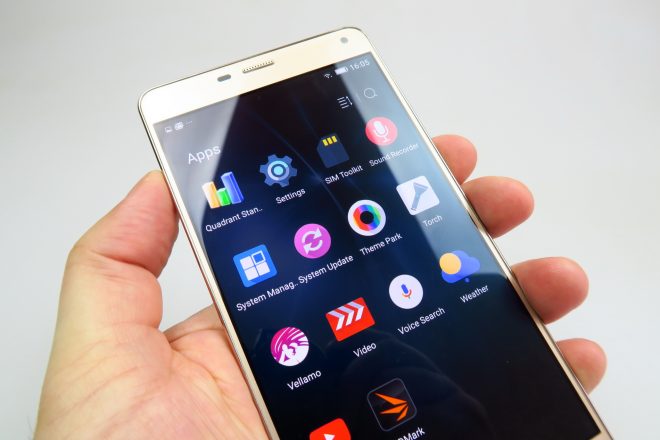 I’d say the Allview P8 Energy Pro/Gionee Marathon M5 Plus is great as a gamer’s phone and a travelling gamer’s phone particularly. It has a great battery, a solid feel and good multimedia abilities. The camera is pretty good, performance is OK and there’s no major flaw here, maybe aside from a few camera quirks.

Still, I feel that the P8 Energy/ Marathon M5 is a bit superior, thanks to the higher achieving battery.