Apple has launched their newest smartphone in the iPhone line-up last year and it was met with equal satisfaction and reluctance from fans all-over the world as what was meant to be the new standard-setter in the mobile industry. According to the latest details it seems that in the end it all went better then expected. 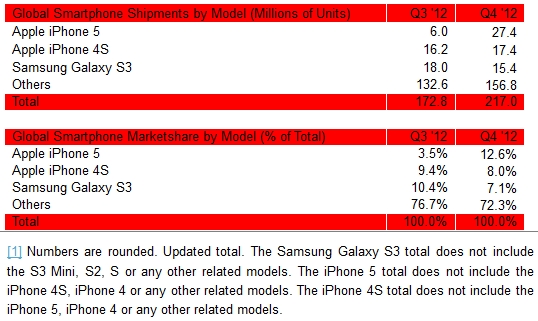 Apple´s iPhone 5 has really broght important changes in terms of hardware specs, as big a leap as that from the iPhone 3G to the 4. The device is very thin and light, while it features an even bigger screen and a very powerful hardware configuration. While in Q3 of last year it seemed that the iPhone 5 would not meed the expediencies in terms of sales, with only about 6 million units sold, thing took a big leap for Apple in the last quarter of 2012.

Strategy Analytics has gathered that Apple has sold over 27.4 million iPhone 5´s till the end of 2012, covering over 12.6 % of the smartphone market share. The iPhone 4S also had a very good result in terms of sales, with over 17.4 million units sold in 2012. Q4 2012 had Apple well in the lead in terms of iPhone sales, as Samsung only managed to sell 15.4 million units of their Galaxy S III flagship smartphone. We look forward to the battle between the upcoming iPhone 5S and the Galaxy S IV.