The iPhone 5 finally gets a detailed analysis from us, after extensive reviewing, in a video that’s half an hour long and finally answers the question: “is the iPhone 5 the phone to buy right now?”. Well, if you’re an iPhone 4S or Galaxy S III owner the answer is no, but let’s see what the device hs for us, when it comes to features, specs and hardware. First of all you should know that this model retails for $199.99 on 2 year AT&T contract in USA and it’s available in black or white. 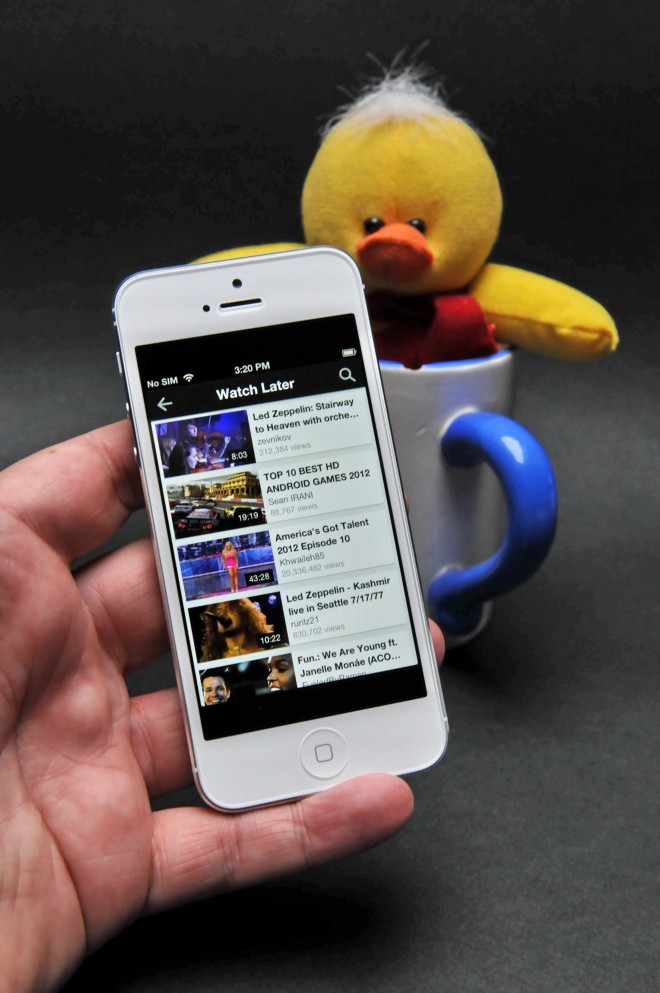 There were some scandals concerning the design of the device, with some scuffing issues of the black version, while the white version was rumored to have some lighting bleeding through the case in the dark. We didn’t have any of those problems, although I’ll tell you that much: the phones gets dirty very easily, so keep it in a case, especially the white version. The iPhone 5 launched in September and we previewed it days after its debut, if you remember.

We’re dealing here with the first non 3.5 inch iPhone, adopting a 4 inch screen and weighing 112 grams. The device feels light as a feather the first time you grab it, unexpectedly light actually. It keeps the basic design lines of the iPhone 4 and 4S, with square edges and all, but this time it’s 20% lighter than the iPhone 4S. It also measures 7.6 mm in thickness compared to the 9.3 mm in waistline that last year’s iPhone had. iPhone 5 is also almost one centimeter longer, in order to accommodate that bigger screen. 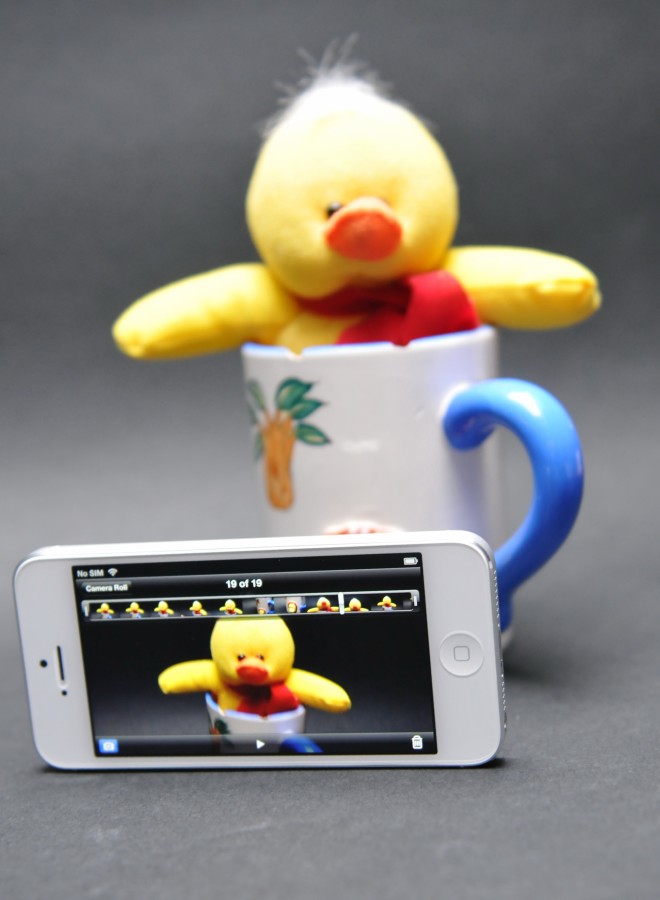 One thing you’ll notice from the start is how easy it is to use the device with a single hand. It simply comes naturally and you’ll even go through the day with a single hand use, which is cool. At the lower side we have the primary changes of design on the phones: the new connector port, Lightning and the audio jack, that has been moved from the top to the bottom. There’s also a bunch of speakers integrated at the bottom as well, while the overall design involves an aluminum case, that’s both resilient and light. It’s also reasonably grippy, although people have complained that it’s very easy to drop the handset.

The facade is all glass and a comfy to use Home button, plus earpiece and front Facetime camera. We’ve got the usual side antennae, with a bit of WiFi death grip at the top, but only a bit. As far as hardware goes, this model relies on a nano SIM card slot, it has a LED backlight IPS TFT 4 inch display with a 640 x 1136 pixel resolution and Gorilla Glass protection. The handset is available in 16 GB, 32 GB and 64 GB versions and packs 1 GB of RAM, LTE, WiFi, Bluetooth 4.0 into the package. 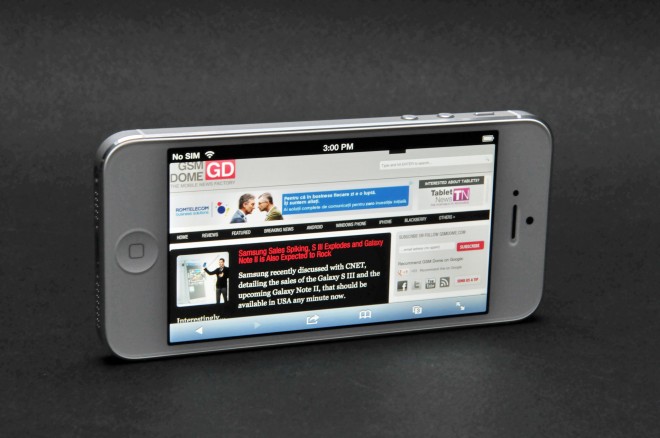 The CPU here is the brand new Apple A6 dual core 1.2 GHz unit, plus a kickass GPU: PowerVR SGX543 MP3 3 core, the one that gave us the time of our lives in NFS Most Wanted. At the back we’ve got an 8 megapixel camera with LED flash, 1080p 30 fps video capture, while upfront there’s a 1.2 megapixel shooter with use for Facetime chat. Other specs include an accelerometer, gyroscope, compass, proximity sensor, GPS, Glonass and a Lithium Polymer battery with 1440 mAh capacity. To get an idea on how good the battery is, imagine we only lost 20% after two hours of taking 200 pictures and videos in the park.

Also 3-4 hours of playing NFS Most Wanted cost us about 60% of the battery life, which is decent. So overall you’ll get a day of use out of the device, maybe even two days if you really manage well your connectivity settings and screen settings. Moving on to the multimedia side, we tested the video first and found the screen to be bright and the 16:9 aspect ratio to really show off the HD playback in a nice way. The screen behaves great in direct sunlight, we’ve got deep blacks and vivid colors, plus great viewing angles. 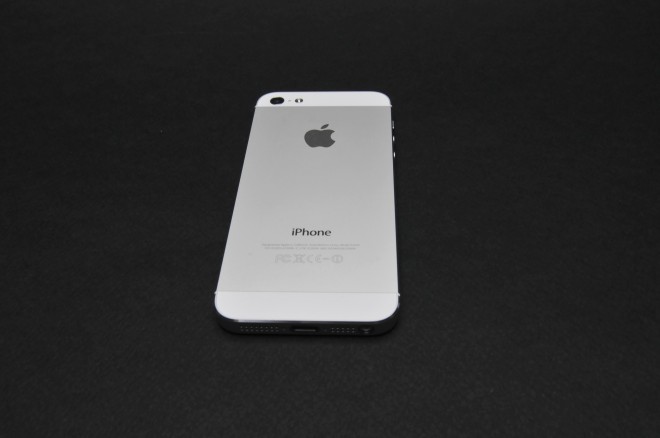 The extra row of icons you get with the new 4 inch screen is also a nice thing. On the audio side, while clarity and quality of the sound are good and so is the bass, I’m not pleased with the fact taht the phone’s back vibrates. With the Earpods on, the experience is fantastic, with brilliant sound isolation and incredible acoustic experience. We’ve also got 3 microphones on the iPhone 5, that will guarantee a kickass calling experience. And now it’s time for the camera, which for me was the best aspect about the iPhone 5.

It simply has excellent autofocus, far superior to the one on the Galaxy S III, for example. The camera is also capable of HDR and does Panoramas with crazy resolutions like 11.000 x 2500 pixels. You can do simultaneous video and photo captures and there’s a video capture below, if you’re curious. This 8 megapixel sensor is a backside illuminated one and it comes with a 6 mm sapphire crystal disc, 5 element lens, F/2.4 and incredible speed. It’s the best camera one can imagine on a smartphone right now.

Moving on to the benchmarks, iPhone 5 scores 89.000 points in Chrome and 194.000 points in Safari, with the latter result being the best you can score on a mobile device right now. In Sunspider 0.9.1 we scored 927 ms on the iPhone and the lower the better, so we beat the Samsung Galaxy S III, that scored 1400 ms and the HTC One S, that scored 1500 ms. In GLBenchmark 2.5 we scored more than LG Optimus G, a landmark for high end Android devices, so once again performance is great. In GeekBench we scored 1642 points, clearly beating the iPhone 4S 633 points, the 759 points of the iPad 2, but also being pretty close to the 1700 points of the Samsung Galaxy S III.

As far as phone calls go, the quality is impecable, volume is great and reception is also brilliant. The Apple Maps is the worst aspect of iOS 6.0, with lots of artifacts when loading, black/white areas, lack of points of interest and an overall disappointing look in 2D mode. In the Flyover 3D mode it actually looks very good, to be honest, especially if the area you’re checking out has been mapped that way. We’ve also got the cool new PassBook app included in iOS 6.0, as well as the new and improved Siri, that’s still a bit inferior to Google Now. 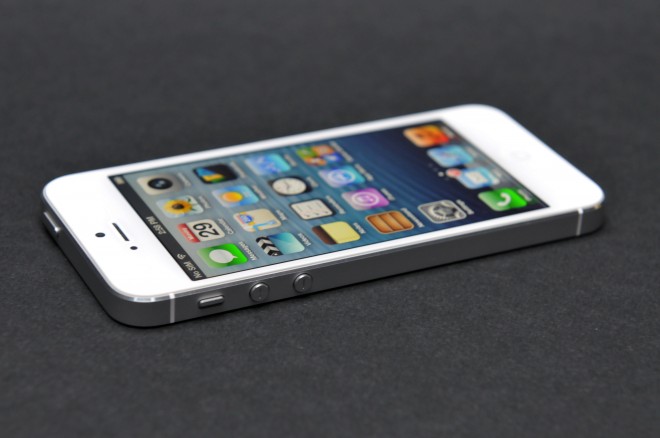 We’ve even installed Google Voice Search for iOS as an alternative and we were hugely impressed by its speed and precision. In the Settings area we find the fresh Do Not Disturb feature, that will chase away the notifications and rings for a while, during a certain time frame of your choice. On the socializing side, Twitter and Facebook are deeply integrated into the OS, from the notification bar to the gallery. Multitasking is done with a double tap of the home button and a side swipe to choose the app you want to enter.

Safar is fast and now offers offline reading, iCloud tab syncing and an overall great experience, especially on the crisp screen. Coming after a period of long use of Android and Windows Phone, I find it almost impossible to operate the iPhone without a Back button. I constantly find myself wondering when the app will close of having to go back to multitasking and close it. Also, while Windows Phone offers live tiles and Android has widgets, iOS sticks to tis colored icons with numbers nearby, the only indication that the app is active… They could improve on this idea… a lot.

Apple Maps supports turn by turn navigation and another new option of the new iOS is the ability to reply to calls with certain predefined messages. Siri now allows you to do commands like “take a picture”, or “post to Facebook” and dictate the message. Overall, the experience is fast and fluid and you won’t find yourselves lost in the interface or use of the iPhone, not once. Now let’s see the pros and cons of the iPhone 5:

Here’s what the pros are:

And the cons of the device: