Although the Samsung Ativ Odyssey Windows Phone 8 handset was officially unveiled last month, we haven’t seen too many pictures of this newcomer, that will arrive via Verizon. Well, that changes now, since the device has been leaked by the usual @evleaks in what seems to be an official photo of the handset. 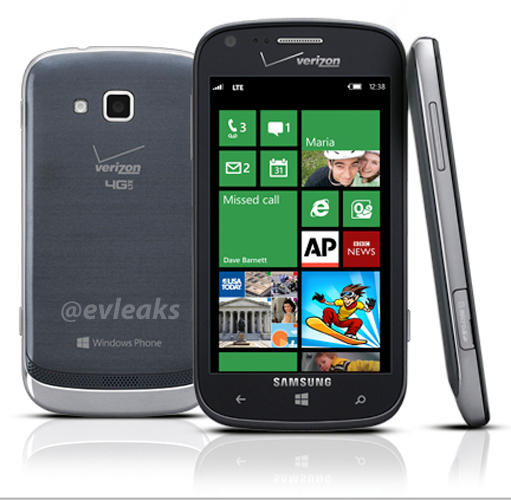 This model is coming to Verizon in December and it will support the carrier’s 4G network. While it’s not yet clear if this is a relative of the Ativ S phone or a modified version, I tend to believe it’s an uglier version of that phone. As you probably know already we’re reviewing the Ativ S right now and we’re pretty pleased with its design. It’s basically a more compact Galaxy S III with a faux metal back and smoother curves, plus a bit of well finished glass on the facade.

Back to the Ativ Odyssey, this model uses a 4.8 inch 720p Super AMOLED screen, a dual core Snapdragon S4 processor with Adreno 225 GPU, 1 GB of RAM and 16 GB of storage. It also has an 8 megapixel camera capable of 1080p video capture and autofocus and obviously it runs Windows Phone 8.