While Microsoft is trying to find the recipe to milk the mobile phone industry better, Apple manages to do so with ease, so it doesn’t come as a surprise that they’ve become the number one tech company in the world. That’s right, Microsoft is no longer number one, as now the Cupertino giant is the world’s biggest tech company. 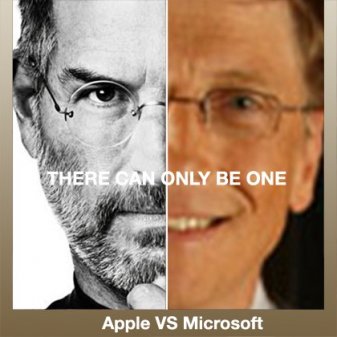 This new position is based on market value, announced on Wednesday, according to Reuters. Apple’s shares grew 2.8% on the Nasdaq, while Microsoft’s shares dropped, leading to this switch of roles. Thus, Apple came in front at the end of the day, with $222 billion market value, compared to Microsoft’s $219 billion.

The reason for this switch is innovation… While Apple is readying a brand new advertising platform, the multitasking-based iPhone OS 4, a new iPhone, a potential streaming service, new MacBooks and possibly a new iPad for next year, Microsoft only gave us Kin One, Two and Windows Phone 7. Is that all they’ve got!? Maybe their cooperation with Nokia will save the day…