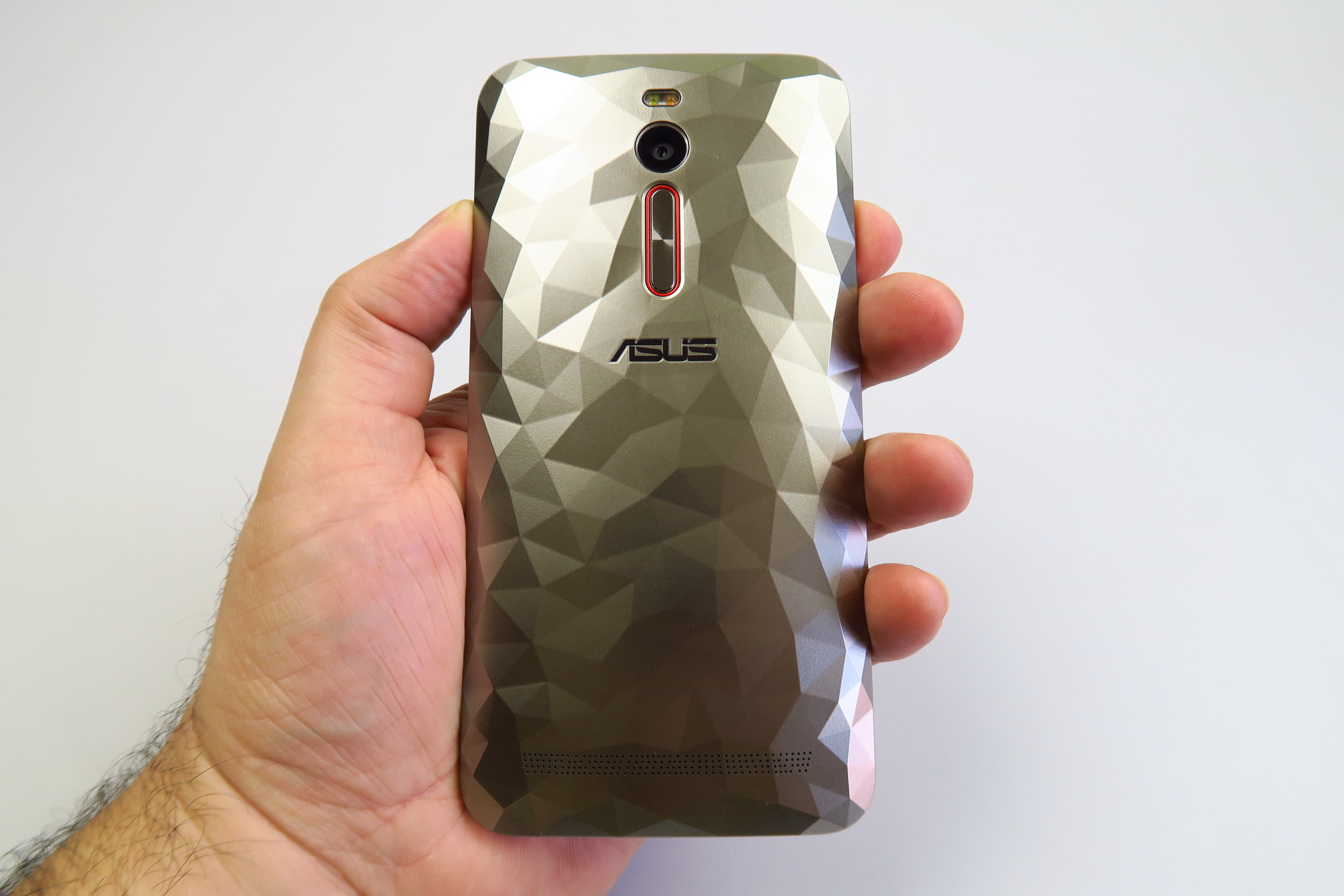 Earlier this Spring we played around with the ASUS ZenFone 2 Deluxe Special Edition, a niche phone meant for gamers and one of the many derived versions of the ASUS ZenFone 2. The device is first a fashion phone and second an ultra high end specced handset. Launched at end of January, it’s priced at $399 in the 128 GB storage version. 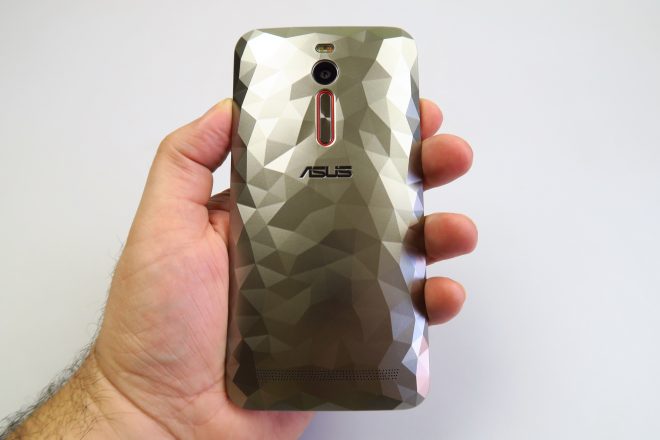 We’re testing the ZE551ML model, that comes with 128 GB of storage, but there’s also one with 256 GB. The design involves either the main cover, dubbed Drift Silver and inspired by crystals or the Carbon Night back, bundled with the phone. That one is inspired by supercars and carbon fiber. Back to the main one, it has a very nice 3D effect and diamond-like back shapes.

There are over 500 polygons included here, guaranteeing an unique look. The handset measures 10.9 mm in thickness and weighs 170 grams, which is the same as the ASUS ZenFone 2 and ZenFone 2 Laser. It’s certainly a big phablet, that’s not easy to use with a single hand, but it does offer good grip and it’s pretty comfy. 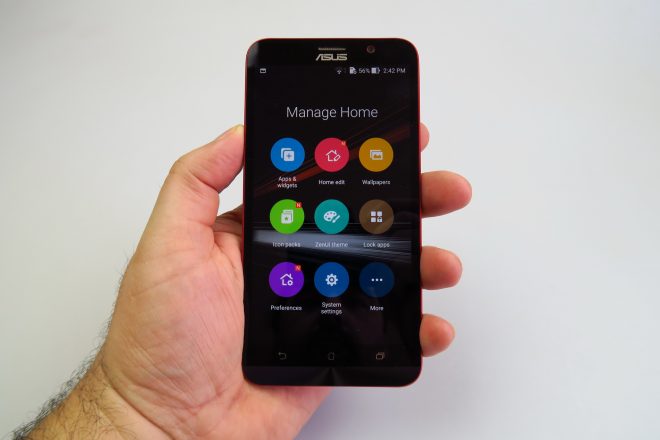 It’s fancy and good looking, but quite massive and the back cover is hard to remove. On the hardware side of things, we start off with the display, a 5.5 inch Full HD IPS LCD panel, with Gorilla Glass 3 protection. This screen has big bezels and there’s no video player here, so we had to resort to the Gallery app for that purpose. The viewing experience involves a weak contrast, mid level brightness and vivid colors, plus wide view angles.

The pixels are of the RGB Stripes variety and the luxmeter showed us a value of 388 LUX, which is OK, but certainly not impressive. At least we surpassed the Sony Xperia Z5 Premium, while at the same time scoring the same as the ASUS ZenFone Zoom. The Settings area brings options like Screen Color Mode, with a color temperature slider and the modes are: Balance, Blue Light Filter, Vivid and Custom. 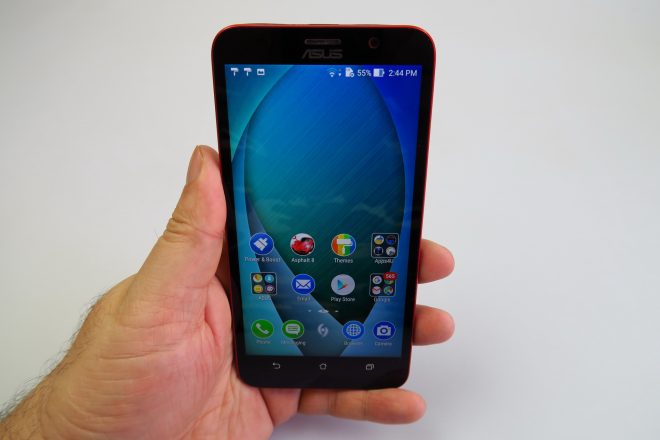 Overall, I’d say the screen is just OK. Going further into hardware territory, the handset comes with an Intel Atom Z3590 processor, a quad core unit clocked at up to 2.5 GHz and there’s also a PowerVR G6430 GPU here. The ASUS ZenFone 2 had a Z3580 CPU, so this is a performance bump. I called this a gaming phone for good reason, so expect hardcore performance, no lag and great UI fluidity.

All the games work like a charm and the device should be future proof for 2 to 3 years. We also get 4 GB of LPDDR3, although it would have been nice to get LPDDR4 to be honest. Then there’s 128 or 256 GB of storage and an extra 128 GB via microSD. In benchmarks we did pretty nicely, with 3DMark only scoring a few hundred points below the Galaxy S6 and S6 Edge. 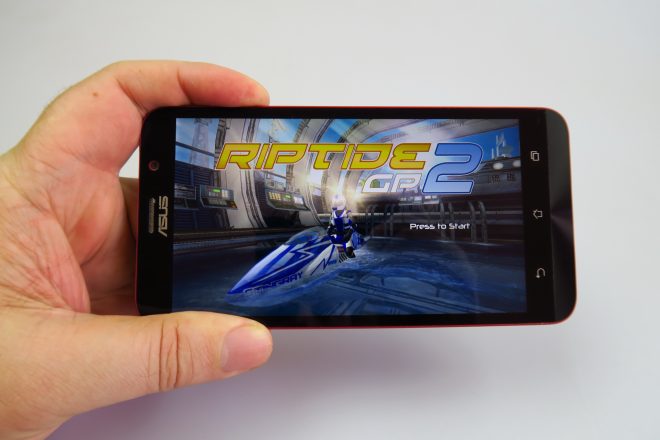 We’re also close to the Snapdragon 808 and Snapdragon 810 devices. In AnTuTu 6.0 we didn’t exactly impress, being miles away from the likes of Huawei Mate 8 for example. This model fits somewhere between the HTC One A9 and Sony Xperia Z5. ASUS also bundled here a package of coins in Asphalt 8, to get you started, so you can enjoy buying a nice ride from the start. 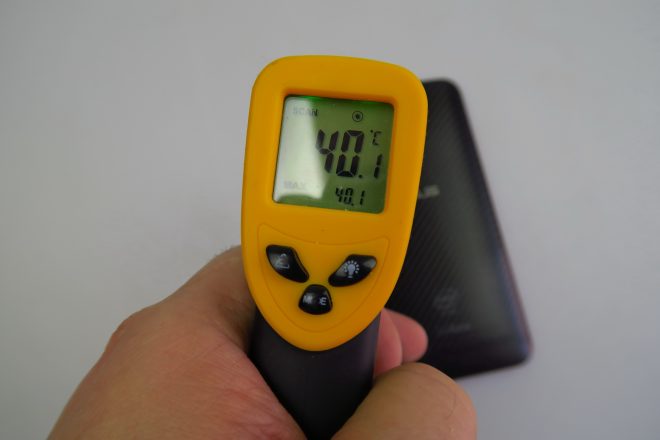 We also did a temperature test, achieving 40.1 degrees Celsius after playing the game Riptide GP2 for 15 minutes and while this is not overheating, it’s certainly a high temperature. Moving on to the audio, we’ve got a back speaker here and back side volume buttons, as well as the Audio Wizard app, with its very own equalizer, that offers music genre options like Smart, Music, Movie, Gaming and Speech. 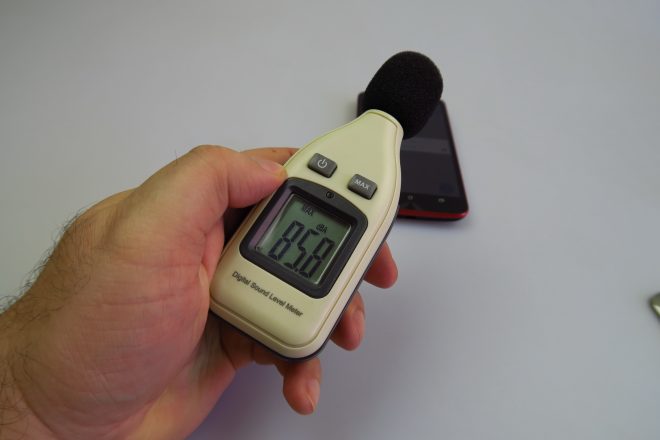 There’s also a stock EQ available taken from Android. The speaker experience was loud and clear, with a good bass, nice percussion and good voice rendering. We also don’t have any muffling and the headphones bundled here are pretty typical for a ZenFone of the past year, being loud, clear and comfy. They also provide good noise isolation.

Then there’s FM radio and we also did a decibelmeter test and achieved 85.8 dBA at the front and 86.2 dBA at the back, both great results, seeing how we surpassed the likes of the Galaxy Note 4 and Galaxy S6 Edge+. Time to talk about the camera! The camera at the back is a 13 megapixel unit, with F/2.0 aperture and it uses a Toshiba sensor, plus a dual tone flash. 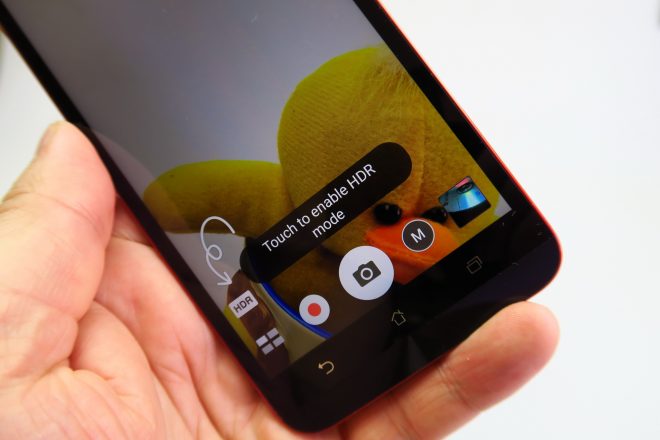 The front cam is a 5 MP unit with F/2.0 aperture as well and an 85 degree angle lens. The camera app starts off slowly, but it brings a ton of options, including the likes of white balance, ISO, exposure and it films in Full HD tops. There’s also digital image stabilization available here and the following capture modes: Manual, Low Light, Super Resolution, Depth of Field, Panorama, Night, GIF and many more.

The Manual mode lets you tweak white balance, exposure, shutter speed and focus. The camera itself has a fluid zoom, fast focus, but takes pics rather slowly. The day time gallery of shots taken with the ASUS ZenFone 2 Deluxe Special Edition includes good colors in the shadow and oversaturated images in the sun. The green of the grass feels artificial and the panorama isn’t exactly impressive, at 9600 x 960 pixels. 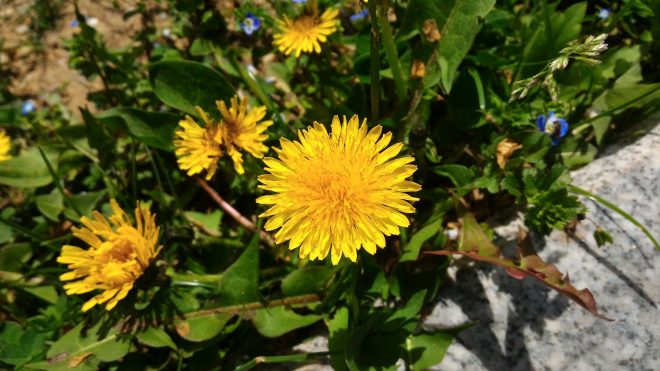 We did score some great closeups and some shots were burnt by the sun, sadly. I’d say the level of detail is midrange here, but not more and I’m particularly talking about landscape shots. Selfies are not very clear and burnt. Once you start zooming into shots, you’ll certainly lose quality, but generally the clarity was nice.

The HDR tends to burn images even more and one good thing that this camera has is focusing up close and getting all the details right in a macro. When everything’s said and done, this camera is superior to the one of the ASUS ZenFone 2, that was a big letdown, but it’s also pretty close to the ASUS ZenFone 2 Laser, although it doesn’t have its killer focus or realistic (and not burnt colors). 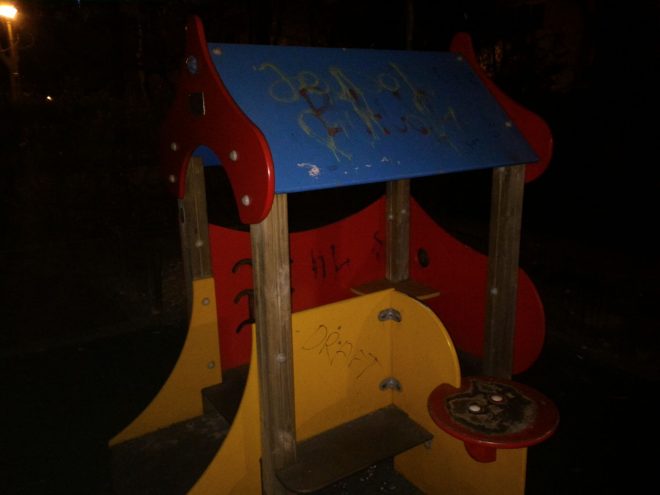 Closesups and textures are at a flagship level on this phone, but not more than those aspects. In low light conditions we got big street light halos, but OK colors and so-so brightness. There’s some blur here and there and the camera handled closeups with flash like a champ. The Night Mode made the captures look quite a bit better in those low light situations.

Video was shot in MP4 format, in Full HD, at 30 FPS and with a good bitrate of 22 Mbps. Sadly, all of it was burnt, oversaturated, shaky and there was focus loss in the distance. Quality simply doesn’t look like Full HD and during the night the image gets stripes al over. I have to say it’s one of the worst video captures I’ve seen on a $300+ phone…

As far as the browser goes, there’s Speed Dial, a Trending section and modest benchmark results for the browsing. The keyboard is comfy and fast and there;s also Swype support. On the connectivity front, ASUS provides LTE Category 4+, with up to 250 Mbps download speeds, as well as WiFi 802.11 a/b/g/n/ac, microUSB with OTG support, Bluetooth 4.0 and GPS, plus Glonass. 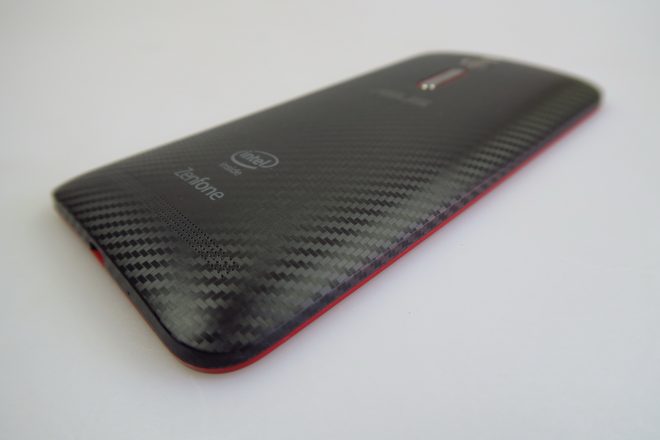 There are dual microSIM card slots on board and we did a WiFi SpeedTest, achieving a pretty solid 27 Mbps in download and 23 Mbps in upload. The dialer offers a Speed Dial and Smart Dial option and the calls brought us an OK signal, nice call quality and loud volume. The battery here is a 3000 mAh Li-Po unit, with BoostMaster technology, that with a 39 minute charge reaches 60% battery life. A 10 minute charge provides 4 hours of 2G talk time. 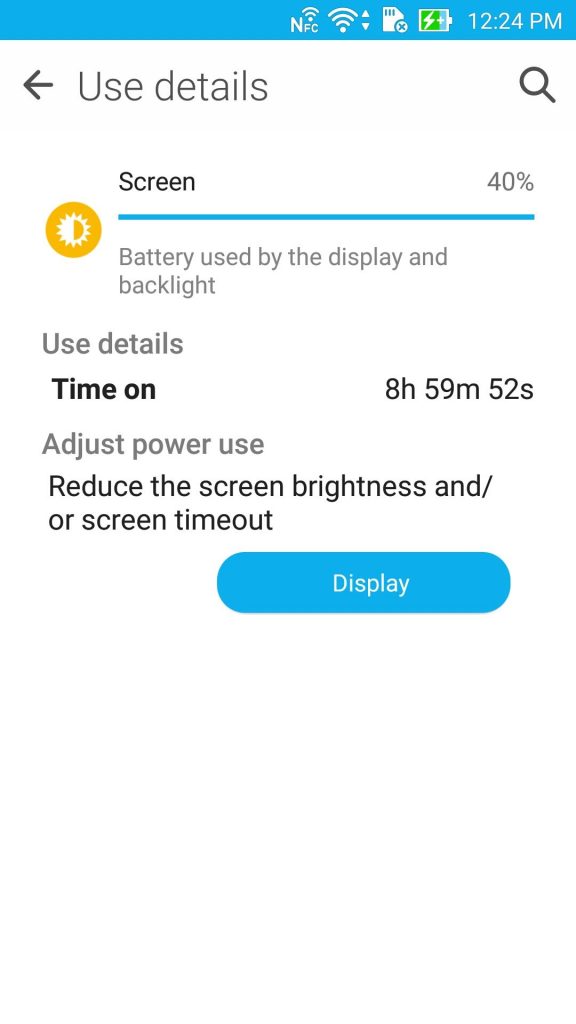 Our video playback test showed that the device achieves 9 hours of playback, which is quite OK, especially since we beat the likes of Huawei Honor 6, LG G4 and Lenovo Phab Plus. In PCMark we scored 5 hours and 36 minutes, which is a tad underwhelming for a gaming phone, since that simulates continuous usage. I’d place this time between the ASUS ZenFone 2 and the ASUS ZenFone Zoom, but below the much more modest LG AKA.

Charging requires 1 hour and 55 minutes, which is just OK. Settings for the battery include Power Save Modes like Performance, Normal, Power Saving, Super Saving and Custom. Some of them let you tweak the brightness, CPU usage and connectivity usage. The battery could have been a tad better for a gaming phone. ASUS ZenFone 2 Deluxe Special Edition runs Android 5.0 Lollipop with custom icons, that offer a red plus black combo. 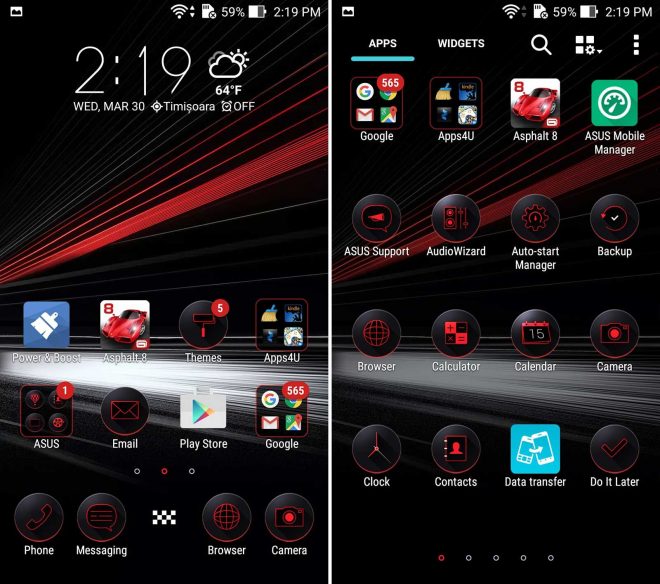 They’re like a racing pattern of sorts and a very minimalistic UI. I for one don’t like this and think it’s an eye sore, but some of you may like it. IT’s a matter of taste. Anyway, the theme can be changed and as far as the rest goes, we deal with the usual bloatware, but luckily we have a ton of storage this time. The Android on board is also kind of old for this day and age.

Multitasking involves a 3D carousel and screen pinning, the dropdown bit has notifications and Quick Settings, including a shortcut for a Power Boost feature. Keep the homescreen pressed and you’ll get a ton of custom options, like good looking widgets, icon size settings, alingment options, colors, fonts, icon packs, themes and a ton more. 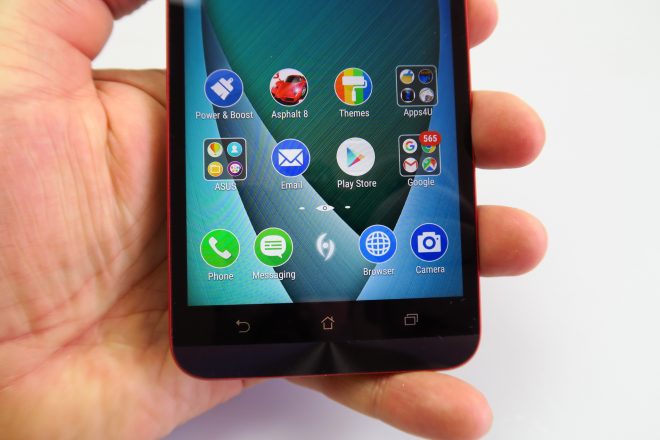 Settings include the ZenMotion gestures, Do Not Disturb feature, ASUS Cover options, Easy Mode and Kids Mode. The apps are a question of bloatware and I counted 73 of them, which has got to be some kind of negative record. The ones worth mentioning are Do It Later, Mini Movie, Photo Collage and Super Note.

And now it’s time for the verdict.

This is a niche phone, with some ultra high end aspects, but also some sacrifices. It’s like a tuned car, with excellent parts and some that are just unimpressive. It’s still good for gaming, for storing thousands of videos and pictures, plus apps and reasonably future proof, plus not that bad looking, thanks to the back cover. The updated price is here.