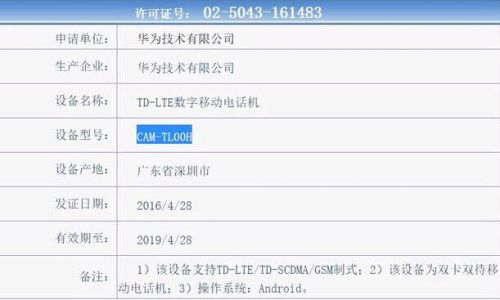 We’ve recently reviewed the Huawei Honor 5X, months after reviewing the 4X and found them both to be quality handsets. Now we’re excited to learn that a Honor 6X is ready for prime time, according to a fresh leak. Some say it may in fact be the Honor 8 that’s leaked, but we don’t think that’s it.

Codenamed CAM-TL00H, the newcomer brings support for TD-LTE and TD-SCDMA, as well as GSM networks and dual SIM card slots. It’ll be a midrange model like its predecessors and rumors talk about a 5.5 inch Full HD screen this time, a HiSilicon Kirin 650 processor and a main 13 megapixel camera. Selfies will be taken with an 8 MP shooter, that will find it hard to surpass the quality of Honor 5X selfies.

The battery is going to have a 3000 mAh capacity and I’m pretty sure there will be variety for this model, that’ll probably be available with a Snapdragon CPU in some regions. We also expect 2 GB of RAM on board or maybe more.