If we remember well, AT&T promised at the beginning of 2011 to start selling quite a few Android phones this year, especially now that it’s rid of the iPhone exclusivity. Well, they promised 12 Android handsets and 20 4G devices in 2011, so we’re expecting goodies soon. A recently leaked document confirms that AT&T’s intentions will become reality. 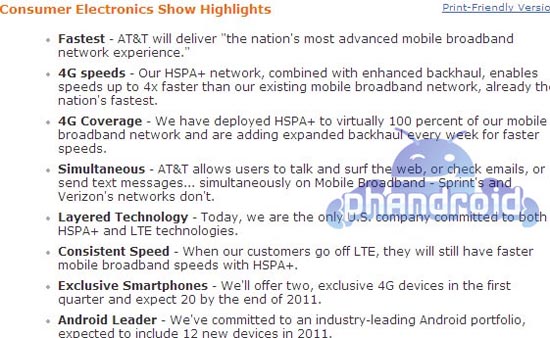 As you can see, the bullet points mention the offers they announced weeks ago. Two exclusive 4G devices will come this quarter, while 18 more will join the carrier’s portofolio as the year progresses. Inspire and Atrix should be two of the hits replacing the iPhone 4 in the coming weeks and no one will regret the lack of the Apple product, I’ll give you that.

Both these models could arrive in time for Valentine’s Day, but you should take the info with a grain of salt.