Snapdragon S4 Pro seems to be hugely popular on modern handsets like PadFone 2, LG Optimus G and HTC J Butterfly, but is it really the most potent CPU out there? In short, yes… but let’s see the figures before we decide. The folks of Phone Arena decided to pull off a nifty comparison between the best quad core phone CPUs on the market: Snapdragon S4 Pro, Tegra 3, Exynos 4412 and Huawei K3V2. 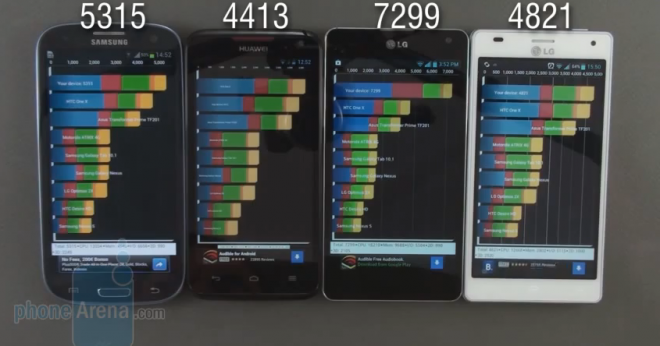 The Snapdragon 4 core model is found on the LG Optimus G here, while the Exynos 4412 is found on the Galaxy S III, the Huawei K3V2 is present on the Huawei Ascend D Quad XL and the Tegra 3 on the LG Optimus 4X HD. The comparison would have nicer if it had included the overclocked 1.6 GHz Exynos 4412 of the Galaxy Note II or the 1.7 GHz Tegra 3+ from the HTC One X+, but this face-off is just as good. So, in Quadrant, the first benchmark we find the LG Optimus G and Snapdragon S4 Pro winning the battle, with 7299 points.

Next up is the Galaxy S III with 5315 points and then the LG Optimus 4X with 4821 points. Finally the Huawei model and its in house made CPU score 4413 points. In AnTutu, the scores are surprising, with the Galaxy S III being the best at 12k, followed by the LG Optimus 4X HD with 11k points and 10.896 for the LG Optimus G, while the Huawei unit is close by with 10.716 points. In GL Benchmark and Vellamo LG Optimus G and the quad core Snapdragon also win, showing us that at least in these synthetic tests are the newest Qualcomm chipset is the winner.

More details in the clip here: