Today we already informed you that the BlackBerry Laguna leaked, as one of the L Series BB 10 OS handsets and now we’ve got an older acquaintance of ours, BlackBerry London, also leaked. It has 90% of the specs of the Laguna, aside from the CPU choice, that this time is a TI OMAP instead of a Qualcomm Snapdragon S4. 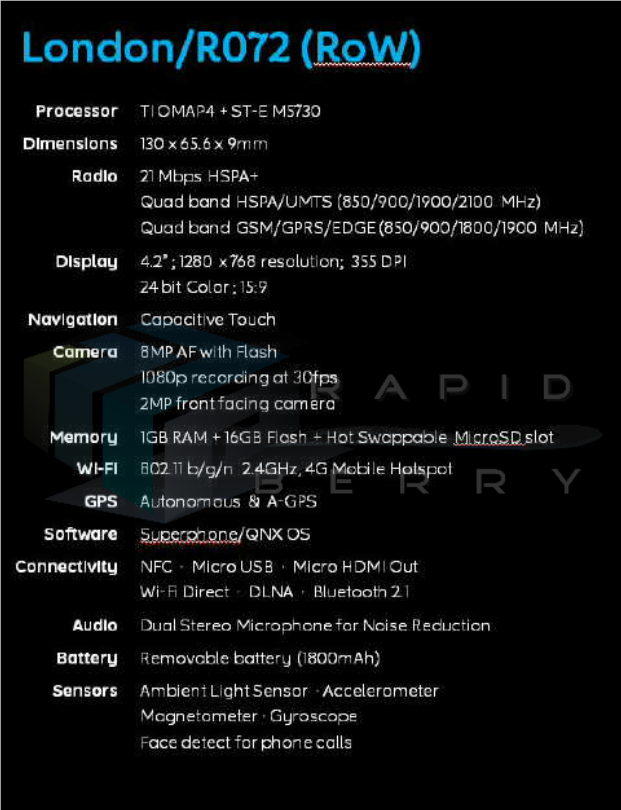 BlackBerry London R072 measures 9mm in thickness, supports 21 Mbps HSPA+ connectivity and features a 4.2 inch display with a 1280 x 720 pixel resolution and 355 dpi pixel density. Other features include an 8 megapixel camera with flash and autofocus, backed by a front 2 megapixel camera. The main cam also does Full HD video capture. Inside the handset we find 1 GB of RAM, 16 GB of flash and a hot swappable microSD card slot. WiFi is on board, as well as a 4G mobile hotspot feature.

GPS, NFC, microUSB, micro HDMI out, WiFi Direct, DLNA and for some reason Bluetooth 2.1 not 4.0 are included on the leaked specs list. We advise you to take the info with a grain of salt, since anyone can fake a list. Finally, there’s a 1800 mAh battery inside the BlackBerry London. Let me remind you that the BB L Series is supposed to include models like the London, Laguna and Lisbon, while the N Series packs two QWERTY units.