T-Mobile recently announced that the Android-based Garminfone will be available starting June 9 for around $200, after a $50 mail-in rebate and bundled with a 2 year contract. Of course, this is a GPS-based handset, with very cool and extended navigation features. 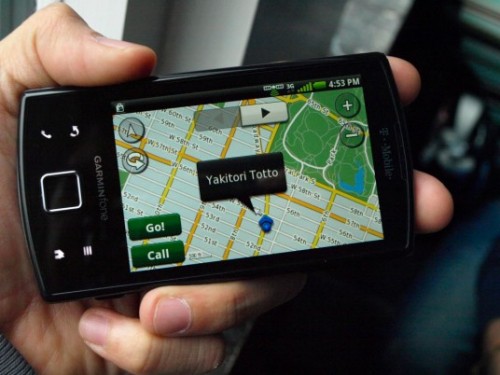 The device comes with a car dock, turn-by-turn audible directions (including real time weather and traffic info), plus pre-loaded maps on the device, so in case of lack of connectivity, you’re still going the right way. This Android newcomer features a 3.5 inch capacitive touchscreen display, a 3 megapixel camera, WiFi, 3G connectivity, a microSD card slot and 4GB of internal memory.

2GB of these will be occupied by Garmin’s GPS maps and we have to mention that Garminphone runs Android 1.6, customized with an unique UI. The handset also supports multitouch in the gallery and Micrososft Exchange accounts. What’s strange about this phone is that it lacks a headphone jack or any kind…

Now, let’s have a look at the Garminphone in action: