Well, it seems that Apple is not invincible, at least not in court, especially now that the company has been defeated by Motorola in two German courts. The authorities found Apple guilty of patent infringement and there might even be an injunction in place, taking Apple products away from the German stores. 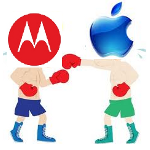 Apple did a similar thing to Samsung, forcing a ban of their tablets in Australia and Germany. The documents in the Motorola vs Apple case are related to products shipped from April 2003 till today. Strangely enough Moto doesn’t seem to be basking in glory, instead it’s probably waiting for a settlement or maybe retaliation from Apple.

The two patents involved are related to GSM, UMTS and 3G standards, while Samsung also attacked the Cupertino giant in the connectivity area on account of breaching WCDMA patents. I guess that the lawsuit from Moto makes sense, since Google purchased Motorola Mobility for $12 billion precisely for patents and this is what they got. However, there are speculations out there that Apple lost this suit on purpose in order to appeal. What do you think?