Google’s been launching quite a bunch of Android Maps client updates lately, for example releasing the 3.4 and 4.0 versions in just a couple of days last month. Now, they’ve just launched Google Maps 4.1 for Android, packed with improvements and neat functions.

The results screen has been redesigned and a swipe gesture for moving between results has been added, but there are more features to uncover, after the break. 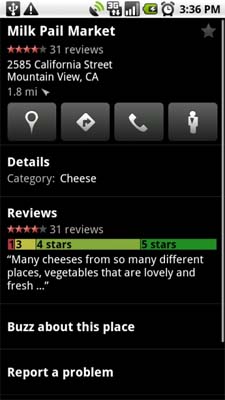 There’s also a new Latitude widget included in the Home screen and support for multiple Google Accounts is also included. What’s really cool is the new live wallpaper for Android 2.1 handsets, basically a live map of your location and a reason to cry for your depleting battery, that gets killed by the constant GPS access.

Android Marketplace offers the client right now on device running Android 1.6 and above.